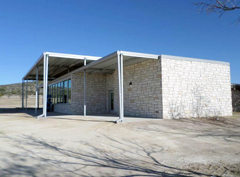 With the end of the U.S. war with Mexico in 1848 and the discovery of gold in California, thousands of people journeyed west. One of the routes stretched from San Antonio to San Diego. Known in Texas as the Lower Road, it passed through Apache and Comanche lands. The U.S. Army protected the route, which required soldiers. And soldiers required forts.

One of these was Fort Lancaster. The fort played an important role in westward expansion by providing escorts for mail carriers, wagon trains, and settlers on the Lower Road.

Standing among long-abandoned, silent ruins, visitors to Fort Lancaster State Historic Site—located in Crockett County between Sheffield and Ozona—can step back in time and easily imagine the remote Pecos River valley post. Travelers will be greeted by the site’s new visitors center, which is now publicly accessible and will celebrate its grand opening at a special event on May 21. Spanning 82 acres and surrounded by the outstretched vistas of West Texas, the site is one of the Texas Historical Commission’s (THC) 20 historic properties.

In 1965, the Henry E. and Claude W. Meadows families and the Claire Benckenstein family donated Fort Lancaster to Crockett County. In 1968, the fort was transferred to the State of Texas. The site first opened to the public in 1969 and was designated a State Antiquities Landmark in 1983. It is also listed in the National Register of Historic Places.

Not much remains of the old fort, but visitors can wander through its ruins and imagine the 25 permanent buildings that included a blacksmith shop, hospital, sutler’s store, and bakery. The new visitors center is a renovation of an existing center dating to the 1970s. The original building remains, but a substantial new gallery exhibit was added on the north side.

New exhibits tell a more complete history of the fort and present the story of Fort Lancaster through artifacts, images, scale models, and a life-sized camel replica highlighting the U.S. Army’s experimental use of camels in West Texas. The exhibit area also includes special floor tiles representing forts and places on the journey from Indianola to Fort Lancaster. To increase visitor comfort, a new outdoor shade canopy faces the fort ruins.

“The Fort Lancaster visitors center project highlights the commitment of the Texas Historical Commission and the State of Texas to history preservation and education,” said Jefferson Spilman, site manager at Fort Lancaster. “This renewed building will provide a 21st-century experience and ensure the history of Fort Lancaster continues to inspire people of all ages.”