Found an Artifact on the Beach? 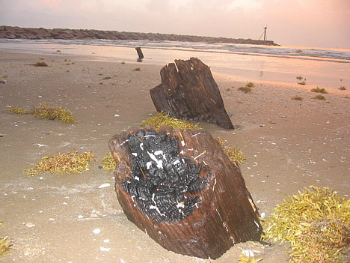 Most Texans know the best way to cool down from the heat is to grab some sunscreen and hit the beach or float down one of our beautiful rivers. Texas boasts 367 linear miles of coastline and 1,500 square miles of river bottoms. These waters have been historically utilized to transport people, goods, and culture for hundreds of years. There are more than 1,800 reported and known shipwrecks in Texas, including the oldest known shipwrecks in the U.S., a fleet of Spanish ships that sank in 1554 off the coast of South Padre Island.

While floating the river with your family and friends this summer, it’s possible that something interesting may catch your eye. For millennia, Native Americans commonly lived or camped alongside water sources, and the remains of their activities are often discovered eroding out of riverbanks. These cultural deposits can include their habitation sites and refuse areas, called middens, and typically contain mollusk shells, bones from fish and mammals, potsherds, and tools.

Dugout canoes are sometimes found along rivers or coastlines. Native Americans hollowed out tree trunks and carved them into long, water-going vessels. They were often large enough to carry several people and were an efficient way to transport goods and supplies from camp to camp. Mostly propelled by poling through shallow water, dugouts were also used by Native Americans for spearing fish. The Karankawa Indians, bands of coastal people that inhabited the Gulf Coast of Texas from Galveston to Corpus Christi, used dugout canoes as their primary method of transportation. These canoes have been discovered eroding out of river banks or buried in sand in coastal areas. 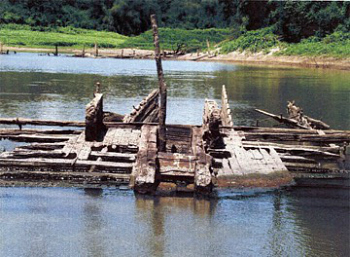 As Europeans moved into and settled Texas, ferry boats were used to transport goods, livestock, and people across Texas’ many rivers. These ferries were built traditionally as flat, raft-like barges. Operators often ran a cable from shoreline to shoreline to aid in guiding the ferry safely across, and charged patrons based on the size of their cargo. Four of these abandoned ferries have been discovered so far in Texas rivers.

A common way to dispose of ships that are no longer serviceable was to scuttle them along riverbanks and other waterways. This is known to have occurred throughout the historic period in Texas and includes 19th-century riverboats, World War I Emergency Fleet Corporation steamships, and tankers built for use during World War I and World War II. One example is SS John Worthington, a vessel from the Esso Tanker Fleet built in 1920 for the Esso company, a subsidiary of the Standard Oil Company. It was torpedoed on May 28, 1943 off the coast of Brazil. John Worthington traveled to Galveston with a hole in her side the size of a house. Once there, the vessel was determined to be damaged beyond repair and was abandoned in Lydia Ann Channel. Often, known wrecks are marked by buoys or signs to alert boaters to the navigational hazard, but some wrecks await discovery. 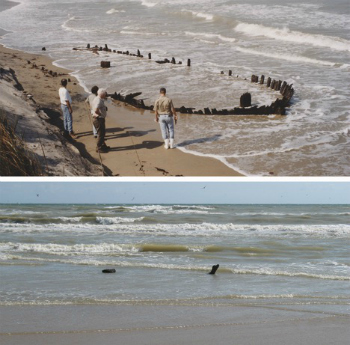 Storms may drive ships aground in shallow areas. Over time, they are buried by constantly shifting sands of the barrier islands or beaches. Burial helps to preserve wrecks in anaerobic conditions, and they are only uncovered periodically by large storms. Hurricanes have been known to expose or wash shipwreck remnants and associated artifacts ashore. Last year in South Texas, more than 40 timbers washed ashore and are believed to be from a vessel dating to the 19th century. Border Patrol agents and a THC archeological steward collected the pieces to prevent beachgoers from continuing to use them for firewood. The THC has documented and photographed these timbers, with further study underway (please stay tuned to this blog for more information).

Private landowners own 95 percent of land in Texas. The remaining state and federal public lands include parks as well as publicly accessible beaches and navigable waterways. While you’re out enjoying the sunshine and waves with your family, there’s always a chance you could stumble upon an artifact from Texas’ past. If you do, what should you do?

Prehistoric and historic artifacts, structures, and other cultural resources found on state public land are protected by state and/or federal laws. The Texas Antiquities Code was created in response to the partial looting and salvage of the 1554 Spanish Plate Fleet mentioned above. Additionally, metal detecting is prohibited in all state and federal parks. This activity is not restricted on (non-park) state public land such as beaches; however, removing artifacts found this way is unlawful.

What should you do?

The THC’s marine archeologists are interested in learning as much as possible about our Texas maritime past and encourage you to contact us about possible archeological finds. If you do find something interesting, take a picture. Just snap a photo with your phone and take extra photos of any interesting details you may see. Since these artifacts are protected from collecting by state (and possibly federal) law, photographs and drawings are the best way to document what you’ve found.

If you find a timber that you suspect could be from a shipwreck, snapping a few detailed photos of the type of fasteners you see on the timbers or any visible tool marks can help archeologists make more conclusive identifications. Take note of any other interesting features on the timber. Does the piece of wood look burned? Does it have any unusual edges? How large are the fasteners? Are they iron or wood? Every clue helps.

In addition to the object itself, it’s very helpful to take photographs of the area where the artifact was found. A trained eye may be able to delineate a site’s extent and condition, which can answer questions about its origins and the condition of the site.

There is absolutely no reason or reward for people to go out and find any kind of treasure or artifact. That's a shame because we could learn so much more about our history. It seems like we ought to come up with new rules which allow for profit-sharing and/or credit for discoveries. Right now if anyone found anything they would not tell anyone and would simply collect it and keep it.

Sarah - great article! I didn't know a lot of this, was a very interesting read.