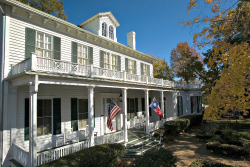 The Starr Family Home’s newest exhibit, Four Generations of Finery, showcases examples of the family’s exquisite home furnishings, art glass, and collections of ceramics and silver. From the time Maplecroft, the home of Frank and Clara Starr, was completed in 1871 until the property was donated to the state in 1985, four generations of the Starr family dedicated themselves to ensuring the house was a splendid and welcoming home.

The rarest pieces in the exhibit, 18th-century Hester Bateman silver, were collected by Ruth Starr Blake, Frank and Clara’s daughter, who purchased many of the pieces from 1950–55 in England. The Bateman silver and other items on loan from the Harry Ransom Center at the University of Texas will be showcased along with pieces from the site’s collection.

Letters between Frank and Clara Starr and their parents indicate a desire for a comfortable home that was well-appointed but not ostentatious. Scant documentation exists as to the origin of many decorative artifacts in Maplecroft. Most information was gleaned from family letters, including numerous requests that items purchased be of good quality. The artifacts in the Four Generations of Finery Exhibit stand out because they exceeded their utilitarian use by being as decorative as they were sturdy and useful.

Quality was a standard shared by all four Starr generations represented in this exhibit. Not just quality of things, but of life as well. Dr. James Harper Starr and his wife, Harriet, as patriarch and matriarch, set the example of hard work and dedication to family that the following generations emulated. 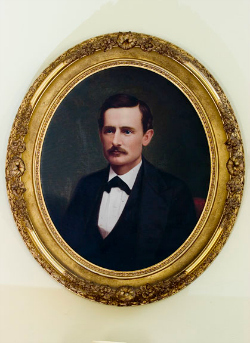 Frank and Clara Starr’s most significant contribution to the exhibit are 10 oil-on-canvas portraits that grace the walls of Maplecroft. Each portrait is mounted in a carved wooden gold-gilt frame. While this indicates wealth, it also indicates a close family bond as all of the portraits are of family members, with many having been commissioned as gifts for siblings or children.

The last member of the family to own Maplecroft was Ruth’s niece and heir, Clara Starr Pope Willoughby. The Willoughby’s’ main residence was in San Angelo, but she and her husband, Ray, maintained the property and frequently traveled to Marshall for long stays at the house. In keeping with tradition, family members were always welcome at Maplecroft as guests at dinners, teas and, as told by a descendant and eyewitness, afternoon ladies’ poker games.  Mrs. Willoughby completed the circle started by her great-grandparents by making family the most important asset of the Starr Family.

The Four Generations of Finery exhibit continues through August 31.