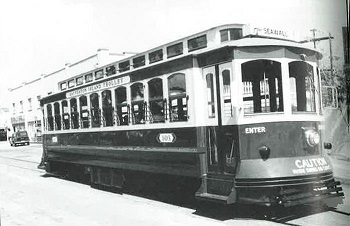 This article was originally featured in the May 1990 issue of The Medallion.

Galveston Island contains one of the largest assortments of historic commercial buildings and residences in Texas. Its world-famous Strand National Historic District, once known as the Wall Street of the Southwest, easily transports a visitor into the 1800s.

Since July 1988, when they were installed for service, four new trolleys have complemented the historical perspective and charm of the island’s early days. The trolley route connects the Strand with Galveston’s historic seawall at the opposite end of the island. The seawall, which is listed in the National Register of Historic Places, was built after the devastating 1900 hurricane to protect the island from destructive storms.

Officials estimate that 680,000 people ride the trolleys each year and that two-thirds of them are tourists. A one-way ride from the Strand to the south terminal at the Moddy Civic Center takes about 30 minutes. The trolley rolls quietly through the Strand and turns past the Railroad Museum, the restored Santa Fe Union depot that served as the island’s main passenger station for more than half a century. After passing the Texas Heroes’ Monument and the Silk Stocking Historical District, the trolley enters Galveston’s architecturally rich neighborhoods that contain numerous restored Victorian residences and the mansions of prominent figures in the city’s early development.

The trolleys, which follow 4.7 miles of fixed track, closely resemble those that operated in Galveston from 1868 to 1938. They were first powered by mules and later by electricity; despite their historical appearance, however, the new trolleys are powered by a state-of-the-art diesel/electric system. Each of the cars is valued at $495,000. The fine handcrafted interiors feature cherry, mahogany, pine, and oak. The trolley system took more than three years to build and cost $12 million. Funds came from a variety of private and public sources, including a sizable grant from the Urban Mass Transit Administration.