Getting our Kicks on Route 66

I recently participated in the Military Vehicle Preservation Association’s (MVPA) 2017 Route 66 Convoy as it passed through Texas on its way from Chicago to Los Angeles at the end of September. The MVPA is an international nonprofit group for military vehicle enthusiasts, historians, preservationists, and collectors interested in the acquisition, restoration, preservation, safe operation, and public education of historic military transport. It has 8,000 members worldwide.

The Route 66 Convoy lasted three weeks, running from September 16 to October 14. With several tours under its belt, the convoy tour runs with military precision. For the Texas section, there were 47 military vehicles with support crews and over 90 people in the convoy. The counts for both vehicles and people varied along the route, with some people joining the group, while others dropped out. Quite a few hardy souls did the entire length.

I joined the group on September 28 in Shamrock (Wheeler County), where the Chamber of Commerce hosted a barbeque dinner of pork tenderloin and ham with all the fixings. The group was greeted by Shamrock Mayor Buc Weatherby, who received a commemorative MVPA Route 66 license plate for being a host city. Donations were gathered for the future Shamrock Veterans Park. The town is home to the iconic Tower Station/U-Drop-In (Conoco), which is a Recorded Texas Historic Landmark and National Register property.

The next day began with the national anthem at O-Dark-Thirty (actually 7 a.m., the start of every convoy day) before the procession headed west. I rode with Dennis Boots of Denton in his military truck for this leg of the tour. Dennis served as a Captain in the U.S. Army Corps of Engineers with a combat tour in Vietnam. He works as a carpenter and general contractor in a longtime family-owned business. His truck is a M36 A3 made by American General. He bought it from the federal government in 2011 and converted the back into living quarters complete with shower, toilet, and air conditioning—all the modern conveniences!

Dennis joined MVPA in 2007 and has participated in all four convoy trips. He was the maintenance officer for the 2009 Lincoln tour, trail officer for the 2012 Alaska tour, and executive officer and commanding officer for the 2015 Bankhead tour. As seen on many of the convoy vehicles, his truck honors a special veteran—his father, Cpl. Donald A. Boots, who sadly passed away earlier this year. His father served in World War II at Iwo Jima and was awarded a Bronze Star with Combat “V.” 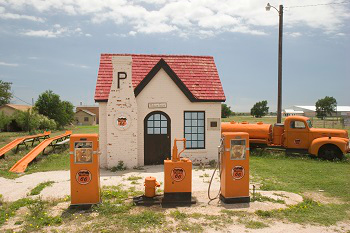 Due to rain the previous day, detours were made from the original Route 66, as the unpaved roads were muddy, so the group did not get to drive by the old Texaco gas station in Alanreed. But they were able to see the iconic Phillips 66 gas station in McLean. Some small communities have only remnants remaining to indicate they once existed, such as Lela (Wheeler County), Boydston (Gray County), and Lark and Conway (Carson County). The remnants are often grain silos or gas stations.

After the mid-morning break at the new TxDOT Gray County Safety Rest Area, I switched over to a 1946 CJ-2A Willys Jeep with a 1966 Vietnam War-era M416 trailer, driven by Fred Ryan of Denton. These Jeeps were marketed to returning veterans and farmers with the aim of putting farm workhorses out to pasture. The open-sided Jeep made for a chilly ride, but at least it wasn't raining. Fred is a retired air-conditioning technician. This convoy is his first with MVPA.

As part of the authentic experience of the re-enactment of the Route 66 convoy, Fred’s Jeep had a mechanical failure. But the Recovery Unit at the rear of the convoy came to the rescue like white knights (or fluorescent orange knights in this case). Mostly made up of New Zealanders (they come halfway around the world for every MVPA convoy!), they had the problem figured out quickly. It was a frayed fan belt that could not be fixed while on the road, so the Jeep was quickly loaded on a trailer before setting off again. Their mechanical expertise were needed on other vehicles as well. Many of these vehicles have hard-to-replace parts, requiring some ingenuity to get them running again. Other international participants were from Australia and Belgium.

As the convoy neared Amarillo, the Amarillo Police motorcycle unit led the official convoy escort through through downtown and the National Register-listed US Route 66-Sixth Street Historic District to the Church at Quail Creek—our generous hosts for a hamburger lunch and to-go snacks. Veterans with flags waving greeted the group for a very warm welcome. After lunch, tour participants went across the street to visit with veterans at the Ussery-Roan Texas State Veterans Home.

The next morning, the last leg of the Texas segment, I rode in a 1953 M-38A1 Jeep with Traci Parent, who is a retired historian for the East Bay Regional Park District in the San Francisco Bay area. She joined the group because her husband Randy is a member as well as a retired veteran.

Randy was a crew chief door gunner on the helicopter “Raider 28” during the Vietnam War. Traci and Randy are members of MVPA Team Golden Gate based in San Francisco, which sees the military convoy as a way show their appreciation to World War II veterans. Randy and Traci are also the official “Keep the Spirit of ’45 Alive!” liaisons of the convoy. The Spirit of ’45 organization strives to preserve the legacy of America’s Greatest Generation. 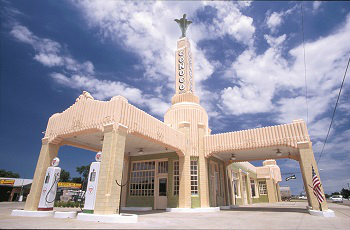 The town of Adrian (Oldham County) was the morning stop. Adrian is the midpoint of Route 66 between Chicago and Los Angeles. The town has done a great job of marketing this claim to fame with plenty of places for photo ops, along with a café (you have to try the delicious cinnamon rolls!) and gift shop (chock full of Route 66 souvenirs). While we were there, a tour bus stopped along with two separate motorcycle groups—it’s obviously a very popular tourist stop. The café, owner and wait staff were used as inspiration for the Disney Pixar movie “Cars,” as was the Tower Station/U-Drop-In building in Shamrock. The owner said that 47 different countries had signed its visitor log so far in 2017.

Back on the road again, heading for New Mexico, I bid the convoy a fond farewell in Glenrio, a small, once-thriving community that straddles the Texas-New Mexico border in Deaf Smith County. Though sadly deteriorated, Glenrio has some excellent examples of road-related resources, including several gas stations, cafes and motor courts. The New Mexico section heading west has an unusual example of a shallow concrete center dividers between the east-bound and west-bound lanes, something that is not seen anywhere else on the Texas Route 66.

As I drove back to Amarillo to catch a plane, I thought back on the stories I’d heard, the people I’d met, the warm welcomes the convoy received and the interesting sights they had passed, and hoped that I can do this kind of convoy tour again.

The THC recently received a $13,000 grant with the National Park Service to do an update of the 2002 Route 66 survey, which will wrap up by October 2018. This was a good overview for me, as I’ll be leading this grant project, which will include new color digital images and an interactive website.

Learn more and explore the Historic Highways across Texas:

Leslie, Thank you for the fantastic article on the Route 66 convoy. For me & Debbie,it was a wonderful experience. I enjoyed visiting with you and having you ride along in the jeep. Fred