Gifts of Granite, Bequests of Bronze 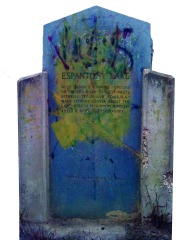 In the depths of the Great Depression, Texans looked to the heights of what they could achieve.

While circumstances around them in 1936 seemed far from a reason to celebrate, citizens of the Lone Star State commemorated 100 years since independence in a big way. Between huge expositions in Dallas and Fort Worth, a towering monument at San Jacinto, and memorial museums, community centers, statues, monuments, and historical markers throughout the state, Texas spent millions of dollars entertaining and educating Texans and visitors from around the world.

Among the lasting legacies of that extraordinary effort are the historical markers and monuments which populate nearly all of Texas’ 254 counties. They remain an unprecedented effort toward public history, documenting the stories of Texas along well-worn highways and little-known backroads.

The state selected several monument workers, sculptors, architects, and other craftsmen to design and produce these permanent memorials to Texas history. Some of the companies—including Rodriguez Brothers and the Southwell Company, both of San Antonio—are still in business today. In the 1930s, the arrival of these granite and bronze objects and their subsequent dedication ceremonies became causes to celebrate and display community pride.

In July 1936, the Abilene Daily Reporter mentioned that Ed Hollar, a Texas Highway Department division superintendent, supervised placement of Haskell County’s Centennial highway marker near the north city limits. The “stone marker with inlaid bronze plates, situated on a slight rise in the level surrounding country, is easily seen by passing motorists.” Later, this pink granite block with bronze plates telling the story of Haskell County was moved to the grounds of the Haskell County Courthouse, where pedestrians could better appreciate its story and artistry. 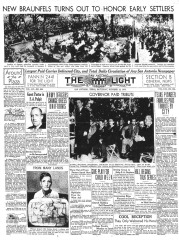 In October 1936, more than 3,500 Texans of German descent witnessed Gov. James V. Allred speak and break ground in New Braunfels for a German pioneer memorial. Included in the crowd were more than 1,100 schoolchildren, who that morning dedicated Centennial markers for Dr. Frederick Lindheimer and John F. Torrey, important early residents of the town.

The San Antonio Light reported that “dancing and entertainment came after the more solemn parts of the program,” and that “after the speeches and singing, a dance was held at Landa Park. Barbecue and refreshment stands did a heavy business.” The San Antonio Express added that “Governor Allred’s address was an appeal to be inspired by Texas history for better citizenship and ended with a poem dedicated to Texans.”

Two weeks later, a crowd estimated at 10,000 descended on Refugio for a Centennial celebration, which included a morning Mass and a history parade through downtown. The San Antonio Express recorded parade entrants from Gonzales to Palacios, including police and fire departments, heavy field artillery from the Texas National Guard, and hundreds of schoolchildren. The students ranged from the Refugio high school drum and bugle corps to 96 pupils from Woodsboro in costume as bluebonnets, other wildflowers, cowboys, pirates, Native Americans, and Spaniards.

Today, the majority of the more than 1,100 historical markers and monuments placed in 1936 remain sources of information and inspiration to new generations each day. But time has not been so kind to some of these Centennial sentinels.

Vandalism, weathering, erosion, and new development have left some Centennials marred, pockmarked, overgrown, toppled, and forgotten. One by one, these markers are receiving attention and being restored to their former glory. 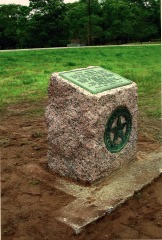 In 2011, the Texas Department of Transportation’s (TxDOT) Tyler district coordinated the restoration and re-installation of Smith County’s Centennial highway marker. Originally located two miles west of downtown on State Highway 64, the marker was vandalized at some point, with the bronze seal of the Texas Highway Department removed.

The marker was eventually found at the Smith County Road and Bridge yard, with a metal insignia for that county office taking the place of the missing seal in the circular space incised in the granite. The marker was no longer visible to the public, and few people realized the age or significance of the block of pink granite locked behind a fence.

Once the marker’s identity was rediscovered, many groups met to discuss its disposition, including: the Smith County Historical Society, county commissioners, representatives from the county road and bridge department, TxDOT, descendants of county namesake General James Smith, and members of local chapters of the Daughters of the Republic of Texas, Daughters of the American Revolution, and Daughters of 1812. After discussion of whether to move the marker to the county courthouse grounds or near its original site, all parties agreed to install a replacement bronze seal and return the marker to the highway.

A rededication ceremony 75 years after the original dedication was well attended, and helped a wide spectrum of participants realize the value of heritage tourism initiatives in the county.

Sam Kidd of the Smith County Historical Society credited the interested parties’ unity and action plan in getting the project done.

“Christine Crosby, environmental specialist for the local TxDOT office, deserves a lot of credit for her help and perseverance on this project over the past few years,” Kidd said. Crosby added that TxDOT was glad to work with a fellow state agency and benefit the public at the same time.

Fundraising to help restore and repair the damaged legacy of the Centennial is a special project of the Friends of the Texas Historical Commission. Donations from individuals and foundations will allow the THC to order and install replacement bronze parts for dozens of markers and monuments across the state, as well as hire conservators for restoration work that requires professional intervention.

“If the markers are lost, the stories they tell are lost too,” said Sunny Howard, development specialist for the THC. “With participation from Texans today, we can pass on the inheritance of the Texas Centennial to generations yet to come.”

This article was originally published in the Spring 2014 issue of The Medallion.