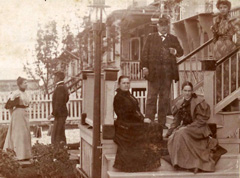 Looking intently into each other’s eyes, Lt. William Glasgow and Josephine Magoffin met in Fort Bayard, New Mexico, sometime between April 1892 and May 1895. It was the start of a love affair that would last for 71 years.

Who would have guessed that these two young people—one born in El Paso and the other in Saint Louis, Missouri—would be brought together by fate. Though their grandfathers had known each other long before they were born, both being traders on the Santa Fe–Chihuahua Trails, they never could have imagined the life they would share together, their five children, and the places they would see while William served his country for 40 years.

From the beginning, it seems that the Lieutenant, a dashing graduate of West Point, was smitten with Josephine and dedicated himself to winning her hand. It was no easy task as his letter of 1895 shows: 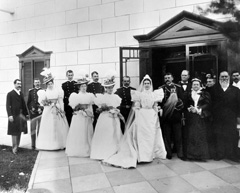 “Now, Dear, if I may call you so, we will not misunderstand each other. You are very dear to me and I want you to be my wife. That is indeed a plain statement, not dressed up with much sentimentalism. I hope that even if not now you will some day say yes. It may not be quite easy to decide but it is your task. You your own dear sweet self must say whether we spend the rest of our days together or- not. I cannot write the alternative.”

Was Josephine concerned about being a military spouse? Did she worry that her carefree life would soon be filled with family obligations? In spite of her initial reluctance, it wasn’t long before the two were married. Newspapers called it, “the most fashionable and brilliant wedding that has ever been witnessed in El Paso.” Married at Immaculate Conception Church in 1896, the ceremony was followed by a luncheon reception at the adobe home of her parents, Joseph and Octavia Magoffin, now the Magoffin Home State Historic Site. 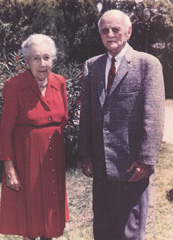 William Glasgow retired as a Brigadier General in 1927, and he and Josephine returned to El Paso to live on the family homestead. In 1964, the General became the oldest living graduate of West Point and attained the honorary command of the Long Grey Line. William kept a photo of Josephine in his wallet throughout his life. She fondly called him “The General” and he would jokingly call her “The Admiral,” lamenting the fact that she often pulled rank! Their grandchildren remember that the couple never lost their joy for living, their love for each other, and their ability to share their love with so many others.

The Magoffin Home is located in downtown El Paso and is part of the Texas Mountain Trail Region.