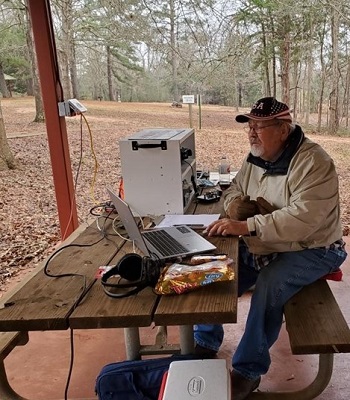 Roger Krautkremer has been a licensed HAM Radio operator since he was just a teenager, and he remains an active hobbyist. Krautkremer recently visited Mission Dolores State Historic Site in San Augustine with his HAM Radio as part of the Parks on the Air (POTA) community. Their members trek across the country to national, state, and local parks and historic sites to “activate” (transmit from) as many parks as they can.

POTA, which started as a commemorative program for the National Park Service’s centennial in 2016, allows members to track parks visited and the number of times they have been activated.

From emergency preparedness to the thrill of controlling their own lines of communication, amateur radio buffs (or “hams” as they sometimes call themselves) have a massive community, which is now engaged in exploring historic sites and enjoying the outdoors.

Krautkremer—an Air Force veteran and former 911 and emergency services operator—and his friends Mike Hooks and Mike Fowler hold the Amateur Extra Class License, the highest class of license available. With just a couple of batteries, the only limitation to their communication is the space required to set up.

The recent gathering at Mission Dolores was an all-day outing for the hams. Some amateur radio operators run from site to site activating as many as they can, while others broadcast weather conditions or even brief histories of the parks. Krautkremer and his friends spent the day operating their radios and communicating with anyone they could find on the waves. 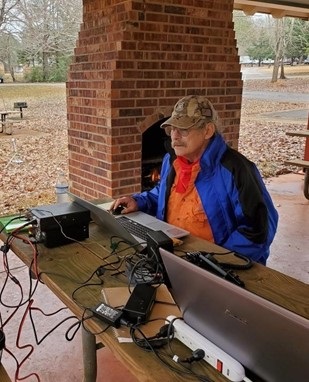 HAM Radio operators also assist with emergency communications and public service events, but for Krautkremer and his friends, Mission Dolores offered the perfect opportunity to sit by the site’s fireplace, enjoy the outdoors, and run their radios.

“A lot can go into learning to operate these things,” said Krautkremer. “HAM Radio operators are licensed by the Federal Communications Commission similar to commercial radio and TV stations. We each take multiple tests on radio theory, regulations, and operating techniques in order to receive our licenses.”