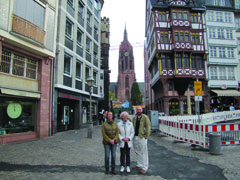 William McWhorter, the Texas Historical Commission’s (THC) Military Sites Program coordinator, was a featured guest speaker at a panel discussion in Frankfurt, Germany, last October. While there, he discussed the history of German civilian internees held in Texas and other U.S. locations during World War II. Upon his return, McWhorter shared details about his unique and inspiring experience overseas.

How did this opportunity come about?

I met Dr. Heidi von Leszczynski, a former Crystal City Family Internment Camp internee, in 2010 when she took a tour of the Crystal City camp remains in Zavala County. Two years later, Heidi extended an offer for me to travel to her home city of Frankfurt and talk to the Steuben-Schurz Society (SSG) about the THC’s efforts to preserve the history of Enemy Alien and German American internment sites in Texas during World War II. Knowing that a lack of travel funds prevented me from attending, she offered to pay for my plane ticket to Frankfurt, provide a place to stay at her daughter Suszanne’s home, and essentially offer me VIP treatment in her home city. I gladly accepted.

What did you discuss during your presentation?

The SSG asked me to provide its learned membership with a vivid discussion of the history of German American civilian internees in U.S. camps during World War II. They designed the event as a panel discussion with a moderator, and afterward the audience posed questions to each panelist. My role was to give an academic historical point of reference for not only the Texas internment sites (Camps Kenedy, Seagoville, Dodd Field at Fort Sam Houston, Fort Bliss, and Crystal City), but on the entire Department of Justice internment camp system in the U.S. during the war.

Did you have any interesting interactions with your German hosts?

What I appreciated and found quite refreshing was the vivid collective memory expressed by two of my fellow panelists, each former child internees (of which Heidi, my host was one), as they discussed their memories of life in the camps and the impact internment had on the course of their families’ lives. Outside of the panel discussion, my host family members were terrific ambassadors. Frankfurters enjoy the rich history of their western German city, as well as its contemporary growth, which has earned a self-nickname of “Mainhatten” for its modern skyscrapers along the Main River.

I’d also like to note the warm reception I received on my first night there. That evening, Heidi took me to the German-American Friendship Day ceremony at the historic town hall. At the banquet that followed, I met U.S. Consul General Kevin Milas, who is serving in Frankfurt. He expressed sincere interest in the THC’s preservation efforts of internment camp history, and we have remained in touch about the THC’s plans for 2013, including a new brochure on all five camps, four new historical markers, and an archeological survey and accompanying National Register nomination for
Crystal City Family Internment Camp.

What did the group members say about the THC’s efforts to preserve this aspect of our shared heritage?

The SSG’s membership truly enjoyed the lively discussion regarding topics of our shared American and German history. A frank and honest discussion about the Department of Justice’s internment camps’ history evolved during the night. Many attendees came up and shared their reactions to what essentially amounted to new information, as they processed the details throughout the night. Without fail, each left me with their impressions and gratitude for the THC’s efforts to take on this difficult part of American World War II history and present it fairly to contemporary audiences. As the agency’s Military Sites and Oral History Programs Coordinator, this has been one of my most rewarding projects—documenting and sharing this truly undertold part of Texas’ World War II history.