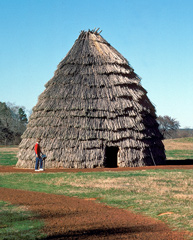 “The Caddo Mounds State Historic Site has always held a certain degree of mystery and magic, but for me the site is also nostalgic. Just driving by the site on Highway 21 reminds me of the days from my childhood when my family would visit the Mounds. There’s just one thing missing. The iconic grass house that once stood tall and proud on the site only exists in my memory… for now.”

From the opening of Caddo Mounds as a State Park until around 1995, a large Caddo grass house stood on site. But after approximately 15 years, the structure became unrepairable and the decision was made to burn it, just as the local area Caddo did when a house became unserviceable. Before it was burnt, archeologists placed typical Caddo objects—arrow points, pottery, woven mats, food items, etc.—inside the structure so they could be studied years later. And of special interest is the fact that members from the Caddo Nation of Oklahoma traveled to Texas to participate in the ritual burning ceremony of that original structure.

Hardly a week goes by when a visitor doesn’t mention visiting the grass house as a child. For many years, site staff and the community have longed for a new grass house to be constructed at Caddo Mounds. Last year, the Friends of Caddo Mounds committed themselves to fundraising for the construction of a new Caddo grass house.

To date, the Friends group has raised money by hosting special programs such as the Woody Plant Art Classes with Bruce Lyndon Cunningham and a Foraging Program with Mark Vorderbruggen (also known as Merriwether), the author of the Foraging Texas blog. They have also collected donations at our El Camino Real Festival and Caddo Culture Day event, hosted a silent auction, and earmarked the donations collected in their onsite donation box to the grass house cause. 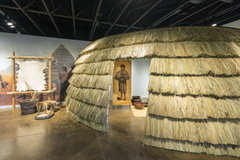 A big boost to our grass house goals came in September when Caddo Mounds was awarded a $15,000 grant from the MICA Group. With this financial boost, the grass house project is officially underway. While the MICA grant will only partially fund the actual construction of the house, continued fundraising and contributions will help make this a truly unique project by allowing the house to be furnished using traditional materials and made objects (beds, mats, baskets, pottery, etc.), and allowing us to create a variety of programs, community outreach events, and educational opportunities surrounding the two-year endeavor.

By including Caddo tribal members, staff, and community volunteers we will create opportunities for cultural exchange and education. In addition, site staff and volunteers will:

If you want to be a part of this exciting project, donate to the Caddo Grass house fund on site or online. To get involved in the construction of the Caddo house, visit the Caddo Mounds website and Facebook page, where we will post special programs, workshops for teachers, opportunities for schools and community groups, and other general volunteer opportunities.

Story should mention that the grass house that stood on the site as built in 1982 by archeologists using traditional tools. When the Caddo structure was burned in 1995, No Caddo artifacts were placed inside it. Rather modern artifacts-ceramics, food stuffs, etc.--were placed in known locations within the structure--so that they could be studied in an analagous way to those that would have been found in a 700-800 year olf Caddo house on the site.

Thank you for your comments.

The staff at Caddo Mounds wishes to apologize for not including any details about who built the first Caddo house or how it was built. Both would make a very good topic for our next blog entry (one of many to come) about the building of the new Caddo House at Caddo Mounds.

We also never intended to imply that actual Caddo objects we installed in the original replica house before its ceremonial burning. We will try and make it clear (in any future articles) that only modern day objects, like the ones the Caddo could have used, were placed in the structure.

Again thank you for your insight and feedback.