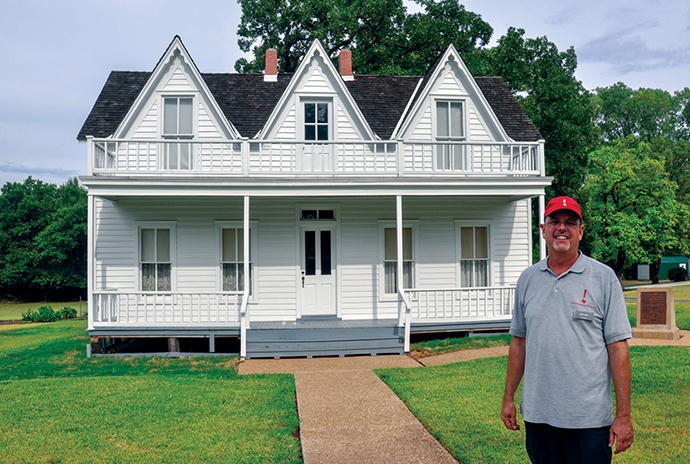 There isn’t much material evidence of World War I in Texas. There are former training airfields, museums with weaponry exhibits, and parks containing honorary memorials, but travelers need to dig a little deeper to find a truly meaningful experience. In fact, the Great War’s Lone Star legacy is most poignant in the real stories that bring wartime drama to life.

Many of these tales are told in the Texas Historical Commission’s Texas Lakes Trail Region. Two of the THC’s State Historic Sites in the region—Denison’s Eisenhower Birthplace and Bonham’s Sam Rayburn House—offer insightful stories about significant statesmen who made lasting impacts during World War I and beyond. 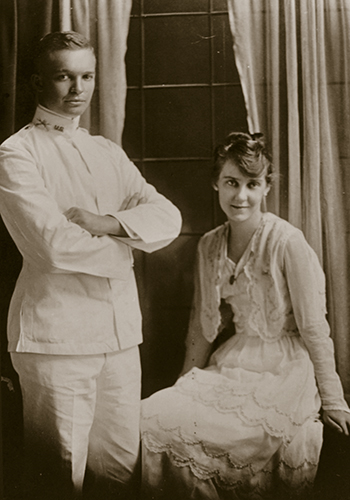 “Ike has a deeper World War I connection to Texas than most people know,” explains Akers, recently named by THC as its Site Manager of the Year. “He spent the first half of the war in Texas, and he even met his wife here. Those are pretty major lifetime events.”

Akers’ favorite story about Eisenhower’s Texas-related experience is a testament to Ike’s tenacity and leadership. Beginning with his role in a punitive expedition against Pancho Villa along the Mexican border in 1916 and continuing with his experience at Leon Springs Military Reservation near San Antonio, Ike developed a reputation for persistence. For months, he repeatedly requested transfers to Europe so he could fight in the war and direct troops. He was even reprimanded by a commanding officer for too many transfer requests.

Finally, the day he’d been eagerly anticipating arrived—Eisenhower received his orders to ship out in November 1918. On November 11, the war ended. He never had the long-awaited opportunity to fight overseas.

“He was despondent, but he was determined more than ever to show his dedication to the military and his country,” Akers explains. “He came away from that experience with even more drive and focus. He vowed to make up for his missed opportunity in World War I, and boy did he ever.”

Eisenhower developed and sharpened his leadership skills as a second lieutenant at San Antonio’s Fort Sam Houston in 1915. He learned to effectively train and organize soldiers and hone the qualities that would define his later success as Supreme Commander of the Allied Forces in Europe during World War II and as the 34th U.S. president. While at Fort Sam Houston, Ike moved up through the ranks, drew positive attention from the top brass, and developed a network of military relationships.

On July 1, 1916, Eisenhower was promoted to first lieutenant—the same day he married Mamie Geneva Doud. The two met in San Antonio the previous year and immediately fell for each other. Once married, Mamie moved into the officers quarters with Ike at Fort Sam Houston.

“She was a very important part of his life there, and she helped with getting him and other military officers connected at events and activities,” Akers says. “Ike did his best to return her affections by purchasing gifts that would make her happy. He was an excellent poker player, so he used his winnings to buy china and special items for Mamie.”

Akers adds that the Eisenhower Birthplace strives to share stories of Ike’s modest beginnings with visitors by focusing on his family’s background and the community’s impact on his life. His father worked on the railroad in a working-class Denison neighborhood, which made an impact on Ike’s development and offered a connection to middle-class Americans. The local community retains a strong affinity for Eisenhower’s heritage, and visitors from across the country travel to the site to learn about Ike’s roots and how he was impacted by his upbringing. (See page 14 to learn more about the site.)

“It’s interesting how much Eisenhower is still connected to our modern world—he played major roles in developing the highway system, space travel, and creating the states of Hawaii and Alaska,” Akers says. “His legacy is still very much with us.” 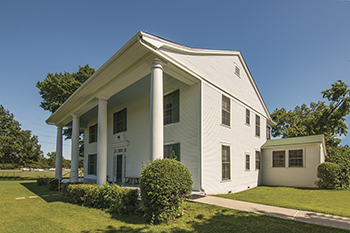 Just 30 miles southeast of Denison is the Sam Rayburn House State Historic Site in Bonham. Rayburn served in the U.S. House of Representatives for 48 years, including 17 as speaker. His first presidential administration was under Woodrow Wilson, who asked Congress for a declaration of war against Germany in April 1917. Rayburn confidently cast his vote in favor.

“Mr. Sam” later returned to Bonham to deliver a speech at the Fannin County Courthouse. Hundreds gathered to hear his reassuring words about their fathers, sons, and husbands coming home soon. Although Rayburn was 36 years old at the time, he signed up for the draft to show support for his nation.

“Mr. Sam ultimately realized he could best serve his country in Congress working for soldiers and helping win the war—that’s where he felt he could make the biggest difference,” says Anne Ruppert, the site’s curator.

At the site, Ruppert shares a selection of war-related items from the home’s collection that reflect the war’s impact on rural Texans. Newspaper clippings with news of local soldiers’ combat deaths and literary contributions from the era depict loss and pride among the community.

Ruppert tells a story about local soldier Rufus Shelton, the first Fannin County resident to be killed in action (May 28, 1918). His mother wrote to Rayburn, asking to help bring his body back. Rayburn submitted an official request to the war department to return his remains; his request was approved, and Shelton was buried in Oakwood Cemetery, where locals often gathered to pay their respects.

“Mr. Sam was an important part of the war movement, especially in this part of Texas,” Ruppert says. “People in the 4th District looked to him for support, and he helped serve as a link to their men overseas.” 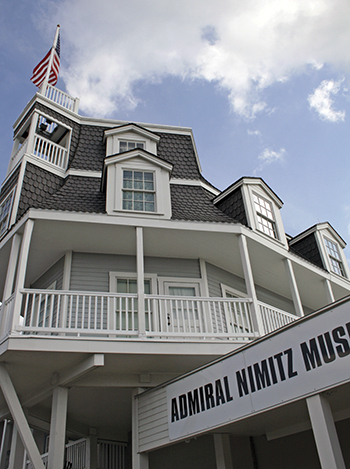 Covering a vast 31-county area in North Central Texas, the Lakes Trail Region is perhaps the richest in World War I heritage of the THC’s 10 heritage trail regions. With seven destinations featured in the agency’s Texas and the Great War travel guide and a half-dozen former military airfield sites, the region still retains a connection to the war.

North Texas’ flat terrain and warm weather made it an ideal location for training aviators, spurring construction at airfields and schools across the region in 1917. Hundreds of airplanes and servicemen occupied three Fort Worth-area fields—Barron near Everman, Carruthers at Benbrook, and Taliaferro north of Fort Worth.

“The airfields really set a lot of things in motion with infrastructure development and population growth around here,” says Jill Campbell, executive director of the Lakes Trail Region. “Fort Worth has always been on the forefront of military aviation advancement, and the families who moved and stayed here have made great contributions to the region.”

To learn more, visit the Fort Worth Aviation Museum, which tells the story of North Texas’ flight-related heritage. The museum contains fascinating photos of World War I training fields, along with an impressive collection of historic warbirds. A few miles south is Greenwood Memorial Park, containing the Royal Flying Corps Cemetery, developed by the British government in 1924 to honor airmen who died during training at the three nearby airfields.

Head east to Dallas to learn more about the region’s aviation history at Love Field’s Frontiers of Flight Museum. The Army built Love Field in October 1917 as a training base, and one of its most common planes was the Curtiss JN-4, nicknamed the “Jenny.” The museum features an impressively restored Curtiss Jenny that was used at the field in 1918.

Continue exploring the Lakes Region’s World War I history at Hillsboro’s Texas Heritage Museum. Located on the Hill College campus, the museum features a remarkable collection, including personal stories of native Texans’ wartime experiences along with a weapons gallery containing armaments from the Great War.

Though located a few hours away, it’s worth making the drive to Fredericksburg to experience the THC’s National Museum of the Pacific War. While there, learn about Adm. Chester W. Nimitz, commander of the Pacific Fleet in World War II. His grandfather Charles Nimitz, a town founder, immigrated from Germany in 1844; when anti-German prejudice flared up during World War I, Chester Nimitz provided an important counterpoint.

In the years before the Great War, Nimitz supervised the building and installation of the first diesel engine ever used in a U.S. Navy ship. During the war, Cmdr. Nimitz served as chief of staff to the commander of the Atlantic Submarine Force and later was appointed executive officer of the battleship South Carolina. From that point forward, he became a rising star in the military.

To discover more heritage travel destinations in the area, download or order a free copy of the Texas Lakes Trail Region travel guide.

For more information about the Lone Star State’s role in World War I, download or order Texas and the Great War.