The Great War and Christmas at the Sam Rayburn House 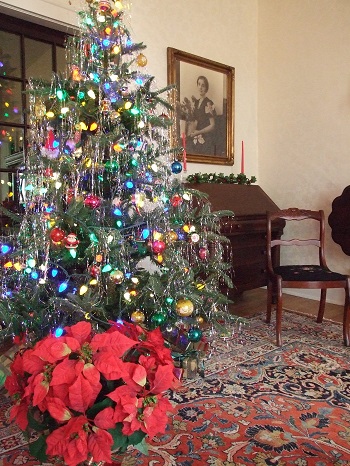 Christmas at Sam Rayburn’s house this year felt a little bit like it did 100 years ago.

2018 marked the centennial anniversary of the signing of the Armistice (November 11, 1918) which effectively ended World War I. On Saturday, December 8 the Sam Rayburn House State Historic Site continued its look back at the war years, 1917-1918 during the annual Holiday Open House.

Visitors who toured the 1916 farm house on December 8 learned about life on the Rayburn farm and across the American landscape during the Great War. In the Rayburn’s kitchen, vegetables ready for chopping and glass jars harkened back to the war years and rationing, home gardening and canning.

Enticing Christmas desserts found on the Rayburn’s table would have been sweetened with honey or corn syrup rather than sugar during the war. Recordings of patriotic music from 1917-1918 wafted through the two floors of the house and reminded visitors of the loyalty felt in the hearts of those on the home front.

Touring Sam Rayburn’s bedroom, visitors learned that “Mr. Sam” served in Congress during the war years, but he like so many other men at that time signed up for the draft registration in 1918. A copy of his draft card was included on the tour of the home. Rayburn was not drafted into service but remained in Congress helping pass legislation for the war effort and in aid of returning soldiers and their families.

Along with the war, visitors also learned about the Spanish Flu Epidemic, which ravaged the world during the same time period. The Spanish Flu killed more people worldwide between 1918 and 1920 (50 million) than died in World War I combat (18 million). Sam Rayburn’s brother, Dr. Frank Rayburn treated many who fell ill during the epidemic in and around Bonham. 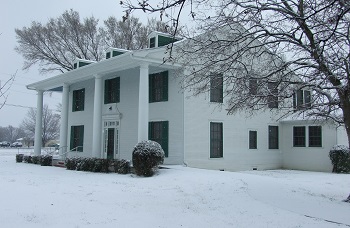 Along with the sights and sounds of the World War I-themed house tours, visitors were treated with a taste of the past with a cake made with a 1918 recipe. The raisin cake recipe was developed during the war years in order for the delicacy to be shipped overseas to soldiers who were serving in France during Christmas time.

Kids and adults both made Christmas ornaments and Christmas greeting cards during the Holiday Open House. A sweet treat for the day was decorating sugar cookies. A lucky few visitors decorated sugar cookies in the shape of donkeys--in honor of that unofficial symbol of “Mr. Sam’s” Democratic Party.