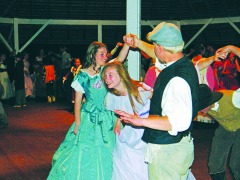 Each April, people gather on the banks of the Navasota River near Mexia at the Confederate Reunion Grounds, one of the Texas Historical Commission’s (THC) 20 historic sites, to honor their Civil War-related heritage. The festive weekend aptly reflects the spirit of Texans who met here a century ago to celebrate the camaraderie and memory of veterans and community members.

The event is the site’s largest educational program of the year, co-sponsored by the Friends of the Confederate Reunion Grounds. The program features educational programming, historic artillery, crafts, and food. Battle reenactments are a highlight of the weekend, along with camping and social events.

Students from area schools attend the program on Friday, and the program is open to the broader public both days. Among the popular activities is the Saturday evening ball, held beneath the site’s 1893 Dance Pavilion, which is listed on the National Register of Historic Places. Area home-school students spend the year before the event researching and creating special clothing for period dancing, and the ball serves as their spring prom.

Confederate Reunion Grounds is also celebrating the recent dedication of Old Val Verde Plaza. The new plaza was completed late last year for the Civil War cannon that was used by both the Union and Confederacy.

The cannon, known as “Old Val Verde,” has a colorful history. Referred to as a Three-inch Ordnance Rifle, it was manufactured in 1862 at the Phoenix Iron Works in Pennsylvania for the Union Army.

Old Val Verde was one of eight cannons captured by Confederate troops at the Battle of Mansfield, Louisiana, in 1864. With the Confederate surrender in 1865, the Val Verde Battery was notified to surrender all of its artillery pieces. However, while stopped at Fairfield on the way to San Antonio, the battery instead chose to bury four cannons. They stayed buried for the next 20 years, until they were recovered in 1885.

In 1894, Old Val Verde was acquired by R.J. Bryant, who had helped bury the cannon and was a member of the United Confederate Veterans. The cannon was later moved to its final home, where it became known as Old Val Verde. 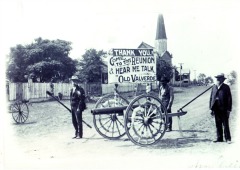 From 1889 to 1946, the cannon was fired daily at dawn and dusk during the four-day reunion gatherings that occurred each year at the site. Today, Old Val Verde serves as a reminder of the sacrifices made by Union and Confederate soldiers alike, and honors the veterans who participated in the reunion gatherings at the site in the decades after the Civil War.

According to Dixie Hoover, the THC’s site manager, Confederate Reunion Grounds is a rare example of a site connected to Texas’ Lost Cause Movement, which sought to bolster camaraderie between Southern veterans and restore the honor of the fallen Confederate soldiers.

“Nearly 7,000 people would attend these annual events,” Hoover explains. “They were much like the site’s current living history gatherings, with families camping under the oaks, enjoying dances, food, and Texas history.”

This article was originally published in the Spring 2014 issue of The Medallion.