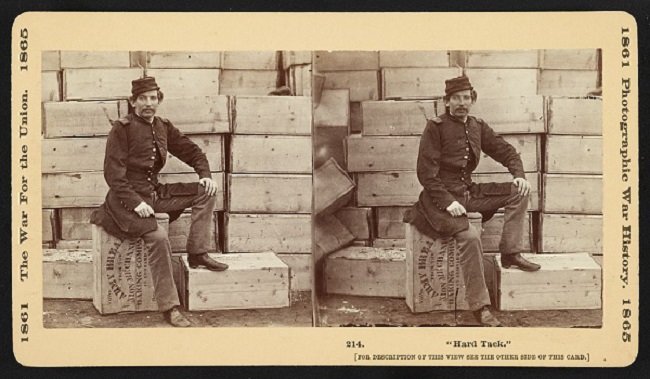 Before refrigeration and canning there was hardtack: the original MRE (meals ready to eat). Hardtack was a flat, hard cracker made of flour, water, and salt. Holes were poked in the dough to make sure it stayed flat, and it was baked several times in order to remove the water. It didn’t taste great, but hardtack was valued because it was a nutritious food that was cheap to make, easy to carry, and lasted for ages.

The name hardtack is thought to have been coined by British sailors, but it has gone by many names during its long history. Egyptian mariners called it dhourra, while the Roman legions knew it as buccellum. Later names were more descriptive: worm castles, molar breakers, sea biscuit, muslin biscuit, pilot bread, and brewis. 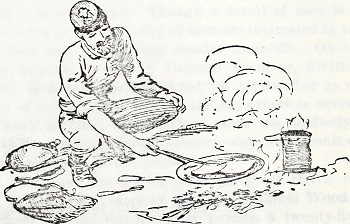 No one knows when hardtack was first created, but food like it has been eaten by people for many years, possibly back to prehistory. The oldest pieces found were over 6,000 years old!

Hardtack was a favored food for explorers, sailors, and soldiers, and was a staple for soldiers until World War I. Hardtack was first mass produced in Britain in the 1600s and commercial hardtack is still in stores today. During the Texas revolution, both sides were given hardtack. The official rations for Mexican troops were eight ounces of hardtack per day.

While hardtack was the ideal food for the solider on the go, it had several flaws. It lacked flavor, it molded when wet, and it was prone to insect infestation. Soldiers would dunk their hardtack in water or coffee or toss the biscuit onto the fire to scare out all the creepy crawlies before they could eat it.

Even once it was free of critters, eating hardtack was a specialized skill. If a soldier had plenty of time he might suck on a piece of hardtack as he marched, eating it in small pieces over time as his spit softened it. Some soldiers would use the butt of their gun to mash the hardtack into smaller pieces.

Most methods of preparing and eating hardtack involved replacing the water. Soldiers would take their hardtack and dunk it in water or coffee, like how we dunk an Oreo in milk today. 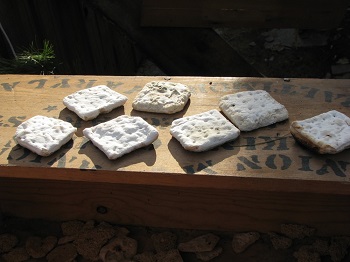 Soldiers would sometimes add water to their hardtack rations, mash it up, and fry it over a fire with grease left over from cooking their pork to make skillygalee. Skillygalee could also be made with brown sugar or molasses, or whatever edible accessories were on hand.

Another recipe was imitation coffee. Soldiers would take their hardtack and fire-blacken it, grind it into a fine powder, and add it to boiling water.

You don’t have to be on the frontier to eat hardtack. You can easily make it in your kitchen oven with supplies that almost everyone has in the pantry. We have a recipe for you to try on your own, or you can watch our video on making hardtack for step-by-step instructions. Let us know what you think of it!