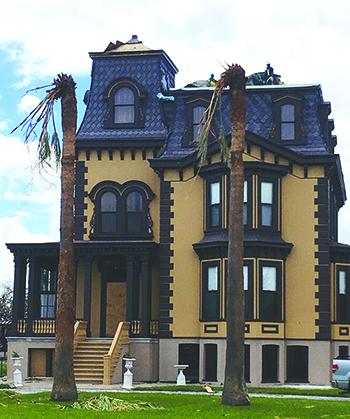 When Hurricane Harvey slammed into the Gulf Coast with 130 mph winds on August 25, the primary concern was protecting Texans’ lives. After the storm cleared, efforts shifted to the extensive structural damage along the coast and in dozens of flooded communities.

Among the impacted properties were five of the Texas Historical Commission’s state historic sites—particularly the Fulton Mansion State Historic Site in Rockport, where Harvey made landfall. The 140-year-old mansion wasn’t toppled, although it received extensive damage to its roof and grounds.

Architects from the THC’s Historic Sites Division identified the damaged roof as a priority repair project, and within days of Harvey’s landfall, THC staff were onsite to assist with recovery. They removed historical artifacts, worked with contractors to build a temporary roof and board up windows, removed soggy carpets, mitigated plaster damage and mold growth, and removed downed limbs and debris from the site.

“We’re hoping we can demonstrate to Rockport and the rest of Texas that the Fulton Mansion can be a beacon for the entire community to rebuild,” said Joseph Bell, director of the Historic Sites Division.

In September, volunteers and staff from several other THC sites arrived to assist with the recovery effort alongside residents of Rockport-Fulton. The site will be closed indefinitely. 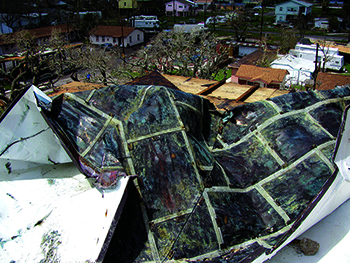 “The Fulton Mansion has become a symbol of strength and endurance on the coast,” said THC Executive Director Mark Wolfe. “It represents Texas’ resilience. We’re going to find the money to get it back to full capacity.”

Another THC property that received significant damage was Sabine Pass Battleground State Historic Site in Port Arthur. The site was reported to be under a foot of water, and storm-related washout resulted in extensive damage to the seawall.

At Varner-Hogg Plantation State Historic Site in West Columbia (26 miles from the Gulf Coast), the grounds were flooded when the adjacent Varner Creek overflowed its banks, and several support structures received minor damage. Site manager Chris Elliott worked with local officials around the clock for nearly two weeks to help protect the area from catastrophic flooding. His assistance with providing emergency access and his concern for neighbors resulted in strengthened community relations. Elliott’s contributions will be recognized, along with those of fellow Site Managers Marsha Hendrix (Fulton Mansion) and Bryan McAuley (San Felipe de Austin State Historic Site), with a special award from THC Chairman John L. Nau, III.

To learn more about assisting with relief efforts and contributing to a recovery fund, visit the Friends of the Texas Historical Commission.

Although it’s been a few months since Hurricane Harvey made landfall on the Texas Gulf Coast, recovery efforts are ongoing and will continue into the foreseeable future. For those interested in assisting regional efforts to rebuild communities and help impacted families restore their lives, consider donating to one of the following relief organizations representing just a few of the many worthy philanthropic groups on the Gulf Coast.

For museums and property owners in search of information about repairing and recovering damaged buildings and items, visit the THC's disaster resources page.

This article was originally published in the Fall 2017 issue of The Medallion.