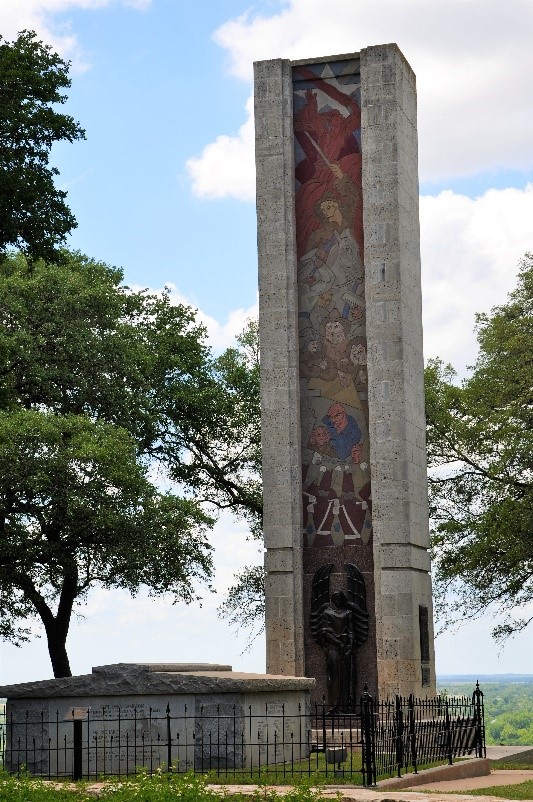 Many people know the story of the Monument Hill tomb—which holds the remains of 52 Texas men who died during the Dawson and Mier Expeditions in 1842 and 1843— and have visited it to pay their respects.

Yet not as many consider the history or significance of the adjacent monument itself. In 2021, the monument will have been erected for 84 years, making the imposing structure a historical component of the Kreische Brewery and Monument Hill State Historic Sites in its own right.

Along with its commanding and awe-inspiring quality, the Mier Expedition and Dawson’s Men monumental shaft is imbued with artistic and symbolic significance which also speaks to the history of the site and Texas as a whole.

On September 18, 1848, the bones of the Texan men were buried on Monument Hill in a commemorative ceremony attended by many dignitaries and citizens of La Grange. From 1850 to 1854, a newspaper aptly called The Texas Monument was published with the intention of raising funds to construct a monument near the tomb.

The paper ultimately failed, and any dreams of a memorial monument worthy of the men of the Dawson and Mier expeditions faded away. For 85 years, the tomb containing the bones of the slain men existed as a crumbling, concrete vault, open to decay by natural elements and curious scavengers alike.

When Texas historian Louis W. Kemp visited Monument Hill in 1931, his concern for the condition of the tomb sparked a new wave of interest in preserving the grave and properly memorializing the men buried within.

This renewed vigor resulted in the creation of the Monument Hill Memorial Association and culminated in a dedication ceremony for a new granite vault, built to encompass the original, held in 1933 on the 91st anniversary of the Dawson Massacre.

Soon after, the period of 1935–39 marked a flood of commemorative actions across Texas, the most well-known of which is the Centennial Exposition held at Fair Park in Dallas.

This 1936 exposition emphasized progress over the years and portrayed Texas’ vast array of flora, fauna, economic resources, and historic events through a number of buildings, murals, and sculptures commissioned for the event.

However, interest in celebrating Texas’ past continued over the following several years, resulting in the construction of over 1,100 properties, including nine memorial museums, five community centers, and countless other markers, statues, and restorative projects statewide.

This impetus to create lasting structures to honor the past was also part of a desire to change the perception of Texas as simply a rural expanse and advertise its rich historical, cultural, and natural landscape to potential tourists.

When the planning for Centennial projects began, Fayette County asked for a $50,000 allocation of funds to improve Monument Hill, including the construction of a new monument.

The application was accepted, and in March 1937, the Mier Expedition and Dawson’s Men monument was completed. No official unveiling ceremony was ever held.

Seeing as the Centennial occurred during the Great Depression, such monuments were only possible through federal government funds. Along with creating structures that served as lasting records of historic events and values, these Centennial projects also generated numerous jobs in construction and increased the number of free or inexpensive educational activities for citizens.

However, it is important to note the kinds of historical narratives that were chosen to highlight the history and heritage of Texas during this period. 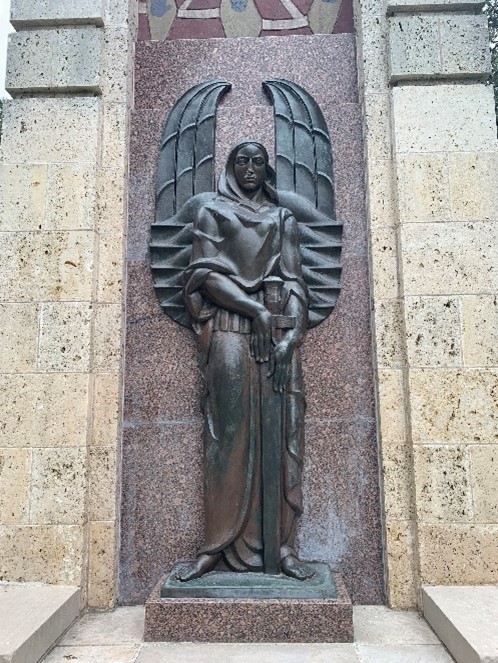 Despite Texas’ diverse past, out of the 20 statues erected during this period, only one was of a non-Anglo figure, and all are male.

Additionally, monuments often only convey a condensed version of the narrative, inadvertently reproducing simplified binaries of “good” versus “evil” that do not accurately represent the true complexities of every story.

Multiple perspectives can be difficult to portray in a historic monument, and truthfully, that is not always the intent. Nevertheless, when visiting any public monument, it is useful to consider which side of the story you are experiencing and how the visual elements may reinforce a certain set of values and beliefs and cement them in time.

The monument itself is a 48-foot-tall rectangular shaft made of rustic Texas shellstone in a classical stele style. Stelae are vertical slabs of stone, usually accompanied by carved inscriptions or memorial designs or reliefs, that have been used for centuries as funerary monuments to the dead.

Architects Louis C. Page and Louis F. Southerland—responsible for designing 622 historical markers and 30 monuments for the Centennial—constructed the stone watchtower in the classical revival style, employing certain Greco-Roman symbolic features, such as the upright form, simple techniques, and an orderly, proportional quality.

The monument itself features many hallmarks of memorial structures. In the 18th century, the obelisk or column became the preferred method for public memorials and tombs and was used as a symbol of immortality and intent to pierce the heavens.

Rather than commemorate one dynastic figure, modern memorials were now dedicated to groups of people, often including Roman or Egyptian symbols and allegorical mourning figures. Contemporary public monuments also emphasized democracy by recording all names of the deceased, regardless of rank.

Along the southeastern side is a low-relief mural carved of concrete, one of the variety of methods in which French artist Pierre Bourdelle was trained. Bourdelle used a technique he called “glyphing,” in which he applied successive layers of pigmented concrete, carving into each layer to reveal the contrasting color beneath.

At the base of the monument rests a bronze sculpture by Raoul Josset of a winged angel, standing guard over the tomb, holding a sword. Bourdelle and Josset had both contributed several pieces for the Centennial Exposition in Dallas, and Josset’s sculptures, which account for nearly half of all Centennial monuments, can be seen across Texas at other memorial sites, such as Goliad and Refugio.

Bourdelle’s concrete mural portrays scenes from the “Black Bean Episode”—from top to bottom, it depicts a goddess of war overlooking the battlefield at Mier, the drawing of the black and white beans, and the execution of the 17 ill-fated Texan men. Blue handprints at the base of the mural contain Bourdelle’s name, as well as two other illegible writings.

The mural evokes the Art Deco and classical revival styles with visually simplistic lines and only a few distinctive colors—red, blue, white, and brown—putting the emphasis on the illustrated story.

The pigmented mural, an innovative use of the medium of concrete, has maintained its color through exposure to the natural elements, a testament to Bourdelle’s workmanship.

Josset’s Greco-Roman angel is reminiscent of many sculptures found near sites of mourning or remembrance; none more so than cemeteries.

Cemetery angel statues vary due to the subject of their mourning and can be categorized by their facial expressions or posture. There are cherubic angels found on graves for young children, weeping angels to symbolize an untimely or especially grievous death, and archangels differentiated by their accompanying object, e.g., Michael holds a sword and Gabriel holds a horn.

Sculptures of guardian angels, often depicted with spread wings and a sword, can signify a desire for justice for the deceased. Josset’s sculpture potently symbolizes the sentiments collectively held by contemporary Texans.

The masterful carving of the face and posture connotes an expression of mourning, reverence, and stern protection of the tomb and the memory of the men within it.

The Mier Expedition and Dawson’s Men monument can teach us a lot about Texas history, namely, about Texans themselves. The concerted efforts by Texas citizens and their continued interest in the stories of the Dawson and Mier men after nearly 90 years ensured the completion of this memorial project.

The shellstone monument is a “tangible symbol of the principles valued by early 20th century Texans whose shared perception of the buried soldiers’ valor and sacrifice” led to its construction (Wilson, 10).

The erection of the monument demonstrates the spirit of commemoration and historical remembrance that swept the state during its 100th anniversary. The fact that so many visitors come out to Monument Hill every year indicates that Texans continue to share many of the values commemorated in the monument by their forebears.

Today, the legacy of this monument, and the others that were part of this fervent period of government-funded Centennial projects, can be found in programs like those operated by the Texas Historical Commission that seek to document and remember the diverse history of Texas.

Alexander, Robert L. “The Public Memorial and Godefroy’s Battle Monument.” Journal of the Society of Architectural Historians 17, no. 1 (1958), 19-24.