Several historical entities recently made Texas history by collaborating on the first-ever partnership resulting in a National Register designation. The Pittsburg Commercial Historic District is the culmination of a yearlong project among the Texas Historical Commission (THC), the Pittsburg Main Street Program, and the Camp County Historical Commission (CHC) to inventory and evaluate many of the East Texas community’s significant historic resources.

“This was a truly collaborative effort, and we’re proud that it’s the first of its kind to be completed in the state,” says Terry Colley, the THC’s deputy executive director. “We hope it can serve as a model for other Texas communities looking to document and preserve historic Main Street districts.”

The Pittsburg Commercial Historic District anchors the city’s (population 4,500) central business area. It retains a high concentration of properties representing the commercial, cultural, and architectural development of Pittsburg from the late 19th century to the present. The 32-acre district is composed of 88 buildings and sites.

According to Leslie Wolfenden, the THC’s historic resources survey coordinator, the survey and documentation process began in early 2012, when THC staff reviewed Main Street cities to determine which needed the most assistance.

“We were looking for a downtown district that wasn’t overly large, but with plenty of good building stock,
an effective Main Street program, and an active historical organization,” Wolfenden explains.

After consulting with Texas Main Street Program staff and Greg Smith, the THC’s National Register coordinator, Pittsburg was selected as the pilot project for the historic resources survey. THC staff hosted an initial site visit in February, and an inaugural public meeting was held in May to inform Pittsburg residents about the project, including the need for volunteers to assist with the physical survey and gathering of information and images. 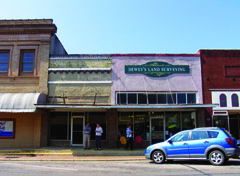 During the visit, community members submitted photographs and provided historical details about the buildings and the town. The following morning, THC staff and Pittsburg volunteers conducted survey work. This consisted of taking photographs of every building in the district and filling out an inventory form for each one.

Afterward, THC staff entered survey information into a database, along with historical and photographic materials. Camp CHC members Vernon Holcomb and Stan Wiley wrote a historic context, including a narrative of the broader historical features—highlighting geography, settlement, transportation, industry, culture, and building patterns—that influenced the development and character of the survey area. Over the following months, THC staff transformed the information into a National Register Historic District nomination. The National Park Service awarded the designation in April 2013.

“A National Register listing is an excellent heritage tourism and preservation tool,” Wolfenden explains. “It provides national recognition of a property’s historical or architectural significance, and a federal rehabilitation tax credit is available to qualifying building projects.”

With the National Register designation in place, Pittsburg’s survey database and images are accessible, allowing city staff to update the information as needed. According to Wolfenden, the completed inventory can also be coupled with Pittsburg’s economic restructuring efforts to provide a complete database of downtown buildings, including historic and current information. 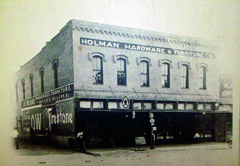 According to the Handbook of Texas, Pittsburg’s early manufacturing endeavors included sawmills, wagon makers, and builders. By 1896, the town also had a foundry, tannery, ice factory, and bottling works. The most active growth took place from the 1880s through the 1930s, and the bulk of the Pittsburg Commercial Historic District properties were built during this time period.

“There are tremendous opportunities to expand this program,” she adds. “We’re always looking for ways to help our cities strengthen the historic preservation umbrella that encompasses our Four Point approach: Organization, Promotion, Design, and Economic Restructuring. The THC doesn’t have the ability to complete this for all Main Streets, but even this limited fashion has helped cities realize the importance of documenting their historic resources and has spurred surveys by the private sector.”

Wolfenden adds that a historic resources survey is a critical starting point for future preservation projects since “it’s difficult to preserve what you have if you don’t know what you have.” As part of a broader preservation planning effort, she says a historical survey will accomplish the following:

To learn more about initiating a historic resources survey in your community, contact Wolfenden at 512.463.3386 or leslie.wolfenden@thc.texas.gov.