When San Antonio visitors venture beyond the River Walk area, they find a remarkable range of heritage tourism sites in a fascinating city that’s downright ancient by Texas standards. 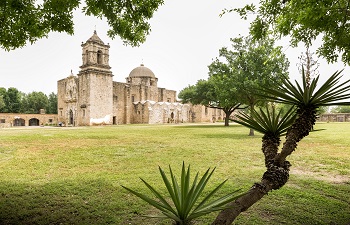 San Antonio’s origins are tied to the 1718 San Antonio de Bexar Presidio and the nearby village of San Fernando de Bexar, chartered in 1731 by a group of Canary Islanders. Spain established five missions along the San Antonio River in the early 18th century, including the Alamo (Mission San Antonio de Valero) and four others now part of San Antonio Missions National Historical Park.

The Spanish Governor’s Palace was completed in 1749, and, nearly 10 years later, San Fernando Cathedral was built just around the corner.

San Antonio went on to flourish in the late 1800s and early 1900s thanks to railroads, highway systems, and military bases. By the middle of the 20th century, the city became a major travel destination due to its moderate climate and dynamic history. 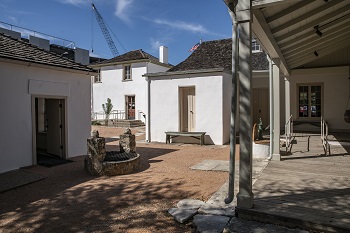 One of the best places to experience San Antonio’s past is Casa Navarro State Historic Site. The THC property is the original 1850s home of José Antonio Navarro, a leading advocate for Tejano rights and one of only two native-born Texans to sign the Texas Declaration of Independence. Visitors get a sense of mid-19th century Texas as they walk among the site’s charming whitewashed adobe structures topped by roofs with rugged wood shingles. The site was named a National Historic Landmark in 2017.

Everyone remembers the Alamo, but don’t forget about the other four historic structures of San Antonio Missions National Historical Park. The missions were named a UNESCO world heritage site in 2015. One of the best ways to visit them is on a bike along the Mission Trail. Highlights include Mission Espada—the oldest of the original missions, founded in 1690 and moved to the San Antonio River in 1731—and Mission San José, known as the “Queen of the Missions” due to its enviable size, ornate architectural details, and thriving mission complex.

Another one of the city’s most prominent buildings is the remarkable San Fernando Cathedral, listed in the National Register of Historic Places. The Gothic Revival structure—officially consecrated in 1873—features lofty arches, a gilded 24-foot-tall altar, and enormous stained-glass windows.

For those strolling around the picturesque plaza, be sure to admire the magnificent Bexar County Courthouse, a Romanesque Revival structure designed by J. Riely Gordon in the 1890s and restored through the THC’s Texas Historic Courthouse Preservation Program. 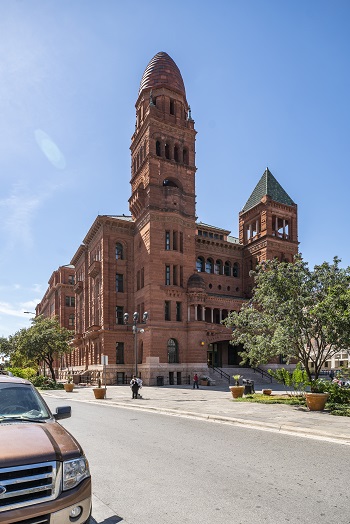 Nearby, the circa-1749 Spanish Governor’s Palace served as the headquarters of the ranking representative of the king of Spain. Particularly striking are the palace’s three-foot-thick stone walls, eclectic mix of historic artifacts, and lush courtyard.

Another one of the city’s premier heritage areas is the King William Historic District, just south of downtown. Greek Revival, Victorian, and Italianate homes stand on pleasant tree-lined streets in this 25-square-block area, one of the first Texas districts to be listed in the National Register of Historic Places. Most of the homes are privately owned, but two are open to the public for tours. The 1859 Guenther House contains a museum of milling history and features elaborate woodwork from a 1915 restoration. Steves Homestead, a stunning three-story mansion constructed in 1876, boasts the city’s first indoor swimming pool.

The downtown La Villita Historic District reflects the Spanish, European, and American influences that shaped San Antonio’s history. Once the site of a Coahuiltecan Indian village, La Villita later thrived as a residential area in the 1700s and 1800s with Mexican-inspired homes of stucco-covered caliche block and German-style vernacular structures. It now houses shops and restaurants.

The second-most famous building on Alamo Plaza is the outstanding Menger Hotel, a Recorded Texas Historic Landmark. The 1859 hotel sits just across the street from the Alamo and has been a destination for travelers, ranchers, and dignitaries throughout its history. The busy Victorian-era lobby conjures San Antonio’s bustling past, when famous guests like Babe Ruth and Theodore Roosevelt walked the halls. Roosevelt’s legacy is celebrated in the Menger Bar, where he recruited Rough Riders and shot a few bullets in the wall (the holes are still there). 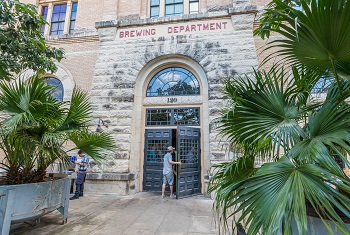 Casa Rio, one of the first restaurants on the River Walk, opened in 1946. You can’t go wrong with the basics here—the crispy beef tacos, savory pork tamales, and zesty quesadillas taste even better while seated at a riverside table.

At the far northern edge of the River Walk’s Museum Reach is the historic Pearl Brewery complex. One of its most popular restaurants is La Gloria Ice House, offering authentic Mexican street food. Another notable option at the Pearl complex is Southerleigh Fine Food and Brewery.

South of downtown along the River Walk’s Mission Reach is the Blue Star Brewing Company. The beers are the main draw here (try the Cinco Peso Pale Ale or Belgian-style King William Ale), but the food is also commendable, including the brisket tacos and Frito pie.

If you’re in the historic King William District, head to Rosario’s Mexican Cafe. The food here is more Mexican and contemporary than traditional cheesy Tex-Mex; the sublime chile relleno with seasoned beef and savory fillings is a highlight.

Downtown’s Esquire Tavern, dating to 1933, is the best place to go for a classic cocktail or local craft beer—especially if you can find a spot at the amazing wooden bar, reportedly the longest in Texas. 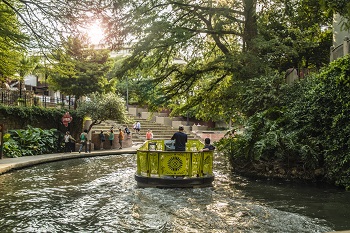