Historical Markers Put Thurber Back on the Map 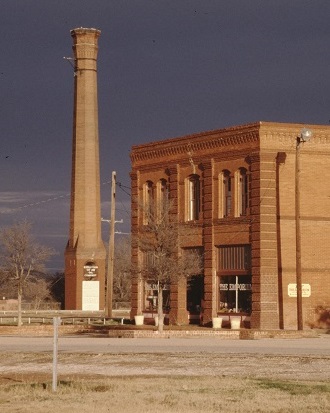 This article was originally featured in the November/December 1995 issue of The Medallion.

Not one, not two, but a record-breaking eight historical markers were dedicated recently in historic Thurber, a coal mining ghost town located 75 miles west of Fort Worth.

Founded in the 1880s by the Texas and Pacific Coal Company, Thurber at its height was the largest town between Fort Worth and El Paso. It was renowned as the most important mine site in Texas at the turn of the century.

It had the best equipped brick plant west of the Mississippi, and later was home to a thriving oil company. It was a company-owned, fully unionized town, and thousands of European immigrants, representing almost 20 ethnic groups, worked as coal miners and brick makers.

When railroads converted from coal to fuel, however, Thurber’s economic base began to wither. The coal mines were shut down, and the Depression eventually forced the closing of the brick-making plant, as well.

Oil proved to be the best source of revenue for the company, but these activities were moved to Fort Worth. During the latter part of the 1930s, the entire town was literally sold: houses, school buildings and their equipment, mine equipment, even gas and water pipelines were dismantled and carted away. 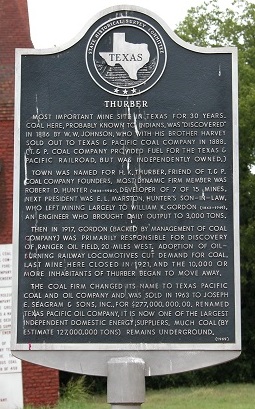 For example, the original St. Barbara’s Catholic Church building, as well as a restored miner’s house, were moved back to Thurber after an almost 60-year absence.

The historical markers, dedicated on October 12, commemorate such topics as the community cemetery, the site of the first coal mine, the Texas and Pacific Coal Company’s mining office, and the Thurber Brick Plant.