History Discovered in Bottles: The Written and Unwritten Messages

This article was originally featured in the July 1991 issue of The Medallion.

How did the daily lives of Austinites 100 years ago compare to those of people in other cities at the same time? Did all economic classes take similar medications, or were some medicines out of reach of the average wage earner? The answers to these and other similar questions may come from thousands of bottles that archeologists have uncovered at the site of Austin’s new convention center, which is now under construction. 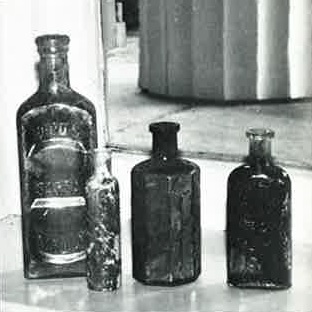 The bottles were discovered discarded in latrines and abandoned cisterns beneath the ground in five blocks of a former residential area downtown. A large number of these bottles once contained patent and proprietary medicines, revealing that, as in so many other urban areas in the 19th century, the traffic in patent medicines flourished in Austin.

People seeking quick relief from and cure of their ailments turned to ready-made solutions in the hundreds of patent medicines sold over the counter. Making claims to cure everything from rheumatism to epilepsy, these medicines contained mostly herb-flavored alcohol and opiates.

Finding the physical evidence of people’s practices is like making direct contact with people of the past, according to archeologist David Brown of the archeological consulting firm Hicks and Company in Austin. “Basically, I’m interested in people, not in bottles. Ultimately, we’ll build a model of the lifestyles of Austinites during this period—what they drank, ate, smoked, and so on,” he said. The data will be available to historians and future researchers. Hicks and Company is conducting the archeological investigation of the convention center site.

Although many of the bottles have no labels, certain bottle shapes became associated with specific contents. Researchers now can determine ingredients in an old bottle by examining the overall size, shape of the lip, geometric shape, and the color of the glass. In some cases, they rely on words or features embossed on the surface. This might be the product’s name, such as “Professor Paine’s Medicine,” or the contents, such as sarsaparilla, or some extraordinary claim of its properties, such as “makes the weak strong” or “liver and kidney cure.” 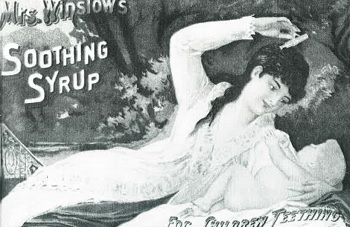 Researchers may also match bottle shapes with newspaper and magazine advertisements that appeared during the period. For example, one bottle found at the convention center site is shaped very much like one in an advertisement for “Mrs. Winslow’s Soothing Syrup for Children Teething.” The ad portrays an infant eagerly reaching for the bottle that his mother dangles above his grasp. Such ads are responsible for the widespread proliferation of patent medicines in this country.

In October 1905, however, Collier’s magazine began a series of articles by Samuel Hopkins Adams that exposed the widespread fraud of patent medicines. The articles shocked Americans and altered the course of the drug and advertising industries. Americans learned that, while their favorite panaceas, or cure-alls, made them feel good temporarily because of their high alcohol or opiate contents, they were almost worthless as cures. Adams’ articles exposed 264 manufacturers and individuals by name. In January 1907, the Pure Food and Drug Act was signed into law, and a number of medicines immediately were taken off the market.

Analysis of the convention center site artifacts is still in the preliminary stage. In the coming months Brown and his associates will be cataloging the bottles, as well as ceramic shards and other artifacts retrieved form the early residential site.