At the Texas Historical Commission’s Curatorial Facility for Artifact Research (CFAR), curatorial staff has been working for the last two years to process and document a large artifact collection excavated from Levi Jordan Plantation State Historic Site in Brazoria County. The collection is composed of objects from enslaved people’s quarters and from the yard around the plantation house. As CFAR staff members process collections, they record and research artifacts that possess unique qualities or portray distinct patterns. 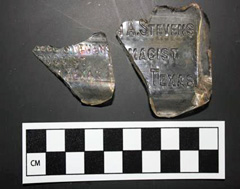 Recently, staff came across a grouping of several diagnostic pieces of broken medicine bottle glass excavated in close proximity to each other from the Levi Jordan Plantation house yard. One of these shards is embossed with the name “NELL STEVENS” followed by “RUGGIST” and “A, TEXAS” (Figure 1: left), the other with “A. STEVENS”, “MACIST” followed by “TEXAS” (Figure 1: right).

Hennell Stevens and his son Edwin A. Stevens were both pharmacists who owned and operated Moore & Stevens drug store at separate times in Brazoria. Due to the context in which the shards were found, it is likely they are from medicine bottles from the Stevens family drug store, and that the Stevens family provided members of the local Brazoria County community, such as the Jordan family, with proprietary elixirs and other pharmaceuticals for at least two generations. 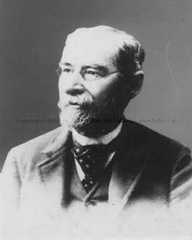 Dr. Hennell Stevens (Figure 2) was born in Germantown, Pennsylvania on October 28, 1832. Before moving to Texas in 1866, Dr. Stevens received his medical degree from the Philadelphia College of Medicine in 1853, and worked as a manufacturing chemist for his own company, Hennell Stevens & Co., prior to the Civil War. In 1862, Dr. Stevens enlisted with the Union Army Medical Staff Infantry Regiment and served as a 1st lieutenant until the end of the war in 1865.

Soon after the war, Dr. Stevens bought the Cedar Brake Plantation in Brazoria County with his wife, Sarah Blake Rowley, and their three sons. Due to the crashing post-Civil War cotton and sugar crop economy and his lack of experience as a farmer, Dr. Stevens eventually sold his property and sought other ventures within the Brazoria County community. Although originally regarded as an outsider and a “carpetbagger” by his neighbors, Dr. Stevens quickly gained popularity in Brazoria County. He was appointed postmaster of Columbia in 1867, county judge in 1869, county surveyor in 1872, and postmaster of Brazoria in 1882. 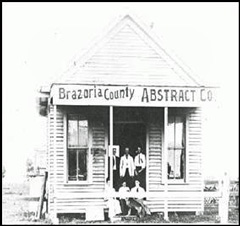 In 1873, Dr. Stevens founded Shapard, Stevens & Co. with associate and traveling Methodist preacher J.H. Shapard. This company became incorporated as the Brazoria County Abstract Co. (Figure 3) in 1890, which was owned and operated for more than 100 years by five generations of the Stevens family. Dr. Stevens also opened Moore & Stevens drugstore in Brazoria shortly after his appointment as postmaster of Brazoria in 1882. This store was operated by Dr. Stevens until the time of his death in 1897, and it seems quite possible that he left this store to his youngest son, Edwin Augustus Stevens. Edwin was educated at Vanderbilt University, trained under his father, and was “at one time proprietor of a drug store in Brazoria, Texas and in 1908 took over the Stevens Drug Company located in Angleton, Texas.” Edwin and his older brother would later become proprietors of the Stevens Drug Company in Beaumont, a prominent and medically advanced pharmacy that also offered an entire medical floor accommodating 12 doctors and an operating room.