Houston, We Have a Legacy 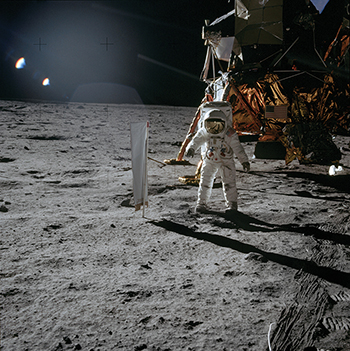 “That’s one small step for man…”

Those six words immediately transport us to the iconic scene of the Apollo 11 moon landing on July 20, 1969. Fifty years later, this momentous event still conjures awe and pride among Americans. Flying under the radar, however, is the nerve center that helped make it all possible: NASA’s Mission Control.

Over the past few decades, Hollywood has shaped our image of the historic Mission Operations Control Room 2, as it’s officially known. Fortunately, they got most of it right. The aquamarine-colored metal consoles, stark monitor screens, and pulsating yellow buttons were integral components assisting tie-clad engineers with piloting the astronauts. Mission Control served NASA as a flight-operations center from 1965 until 1995, guiding the Gemini through Space Shuttle programs until an updated room opened for tours in the mid-1990s. 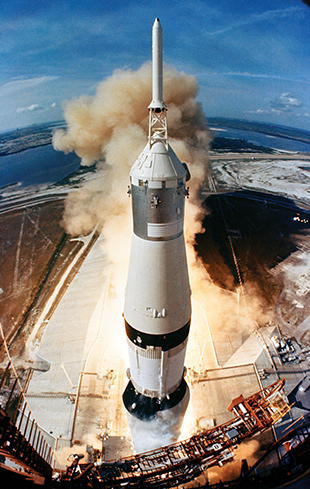 Designated a National Historic Landmark in 1985, the original Mission Control became an endangered site due to dwindling financial support, unrestricted access, and alternate priorities. Preservation efforts over the past several years have provided success stories (and a few challenges) that will result in a fully restored Mission Control center worthy of the legacy associated with the events that occurred there.

“The story we’re telling is Apollo 11—that’s what we want people to experience when they walk into that room,” says Sandra Tetley, NASA’s historic preservation officer. “That was the event that impacted world history. That’s what we hope people will feel.”

Things are on track for a 50th-anniversary reopening (editor's note: Mission Control officially opened to the public on July 1, 2019), but the restoration team in Houston has had some problems. “We made history so fast around here, a lot of it wasn’t even documented,” Tetley says, adding that over several decades, many reports were thrown away, audio tapes reused, and equipment discarded. Other challenges included restoring consoles and replicating materials that were replaced for the Space Shuttle program.

Fortunately, she and her preservation team—Stern and Bucek Architects, GRAVitate, and Cosmosphere—can consult the ultimate historical resources: former Mission Control employees. NASA retirees like Flight Director Gene Kranz have been integral by providing files and stories documenting details of the room’s memorable moments. According to Tetley, working with the retirees has been the most rewarding aspect of the project.

“They’ve been so wonderful—these no-nonsense men have provided insightful information and have such great senses of humor,” she says. “They call Mission Control their shrine. It’s their cathedral.” 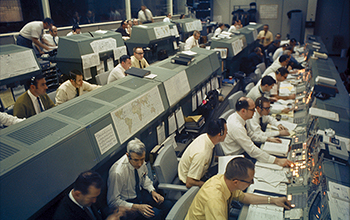 During the restoration process, researchers made several remarkable discoveries. Among the biggest was the original carpet under an air-tube station that remained stationary for decades. The team took a sample to Mohawk Carpet, where employees identified the historic style and enthusiastically offered to replicate its materials and colors.

Another fascinating find was hiding behind a fire extinguisher on Mission Control’s wall. After removing the boxed enclosure, researchers discovered the original wallpaper underneath and worked with a company to recreate the product.

“They even found the original roller with the exact same pattern,” Tetley says. “We worked with them to match the color as closely as possible so we wouldn’t have to just slap some commercial replacement paper up there, and they totally nailed it.”

Tetley describes one more historical discovery: ceiling tiles. The original style and pattern were found in a long-forgotten lobby phone booth. Once again, the restoration team found a contractor to work with the closest-available ceiling tile and recreate replicas by hand.

“Everyone has been so dedicated to helping us out and getting everything just right,” Tetley says.

WE HAVE A LEGACY 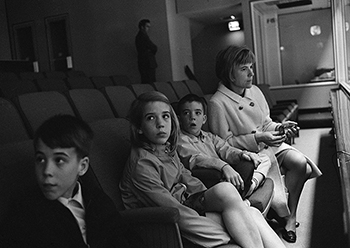 Houston was a burgeoning city in the early 1960s when President John F. Kennedy gave his famous speech at Rice University, stating, “We choose to go to the moon.” The structure housing Mission Control, known as Building 30, was constructed on the sprawling NASA campus in 1965. Although rather unassuming on the outside—a large gray monolith with a small section of decorative concrete breeze blocks at the entryway—Building 30’s interior hummed with activity. In fact, the energy from room-sized computers generated enough warmth to forego a heating system.

From 10 Gemini flights to a dozen Apollo launches, the Mission Control room evolved as technology improved in the late 1960s.

“Now you have more computing power in your smartphone than all of Mission Control had when we landed a man on the moon,” Tetley says.

The Texas Historical Commission plays an important oversight role in the preservation process. According to THC project reviewer Lydia Woods, the agency ensures the Secretary of the Interior’s federal preservation standards are met during every stage of the project. Since Building 30 is federal property, Woods reviews proposed alterations through the Section 106 process.

“Every element of this project comes across my desk at some point—I never thought I’d be so fortunate to work on an internationally significant place like this,” she says. “It’s extremely humbling to talk with those who were working in the room during the Apollo 11 landing. Their memories will help visitors see what it was like to be there on that day.”

Justin Kockritz, another THC project reviewer for federal programs, adds that part of the agency’s role is to serve as an advocate for the state’s interest in preserving and restoring Mission Control while mediating conflicts. THC reviewers also help demonstrate the distinction of Mission Control’s connection with events of global significance. 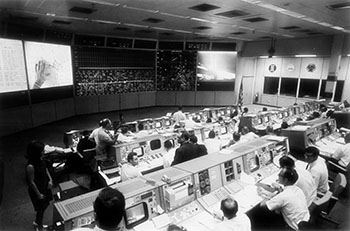 “Even in its pre-restoration condition, just visiting Mission Control was awe-inspiring—but to have an opportunity to play a small part in the restoration of this incredible place has been amazing,” Kockritz says. “Knowing that future generations will not only get to learn about the history of the American space program, but that they will get to visit and experience the actual place where that history occurred, is truly rewarding.”

According to Tetley, the preservation team initially struggled to replicate Mission Control details due to an unexpected lack of video documentation. However, several sources recently emerged that proved to be invaluable, including historic films so well-preserved they reveal details that weren’t attainable in grainy footage and oral histories.

“The films are unbelievably clear—you can even see the wrinkles and worry lines on the engineers’ faces,” she says. “You can also see the vivid colors of the ashtrays, coffee cups, pens, and lighters. All those little details make everything feel real—it’s almost like being there.” 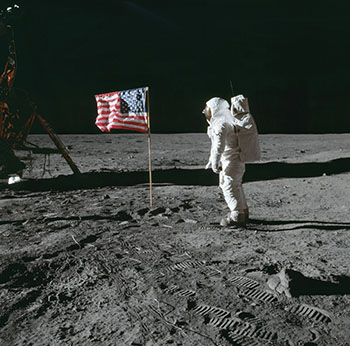 By the time the Mission Control restoration is wrapped up, the preservation team hopes to transport visitors to the Apollo 11 lunar landing via precisely rehabilitated and replicated details in the famous room. People will see numbers and charts, and listen to a relatively unknown phone call from President Richard Nixon to Armstrong.

She adds that visitors will also hear the air-to-ground audio loops, including conversations with engineers and astronauts, along with background chatter in the Mission Control room. She hopes it’s an emotional experience for people that will leave them with a sense of pride and awe.

“When visitors walk into the viewing room, we want them to feel like it’s July 20, 1969—we want people to be able to relive this important era in history,” she says. “What America did 50 years ago was so, so cool. That feeling of achievement and seeing our astronauts on the moon is still an awesome sight. I hope people have that same incredible feeling as all of America did 50 years ago.” 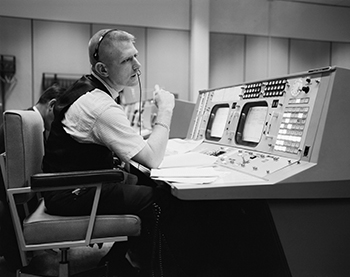 Along with successes like the moon landing, Mission Control was the center of several tense and tragic moments. One of the most heart-pounding experiences was during Apollo 13, when the ship and its crew of three astronauts were in grave danger after an onboard oxygen system failed.

As leader of the flight directors who brought Apollo 13 safely back to Earth, Gene Kranz was at the heart of the nerve center. The film “Apollo 13,” starring Ed Harris as Kranz, chronicles his valiant efforts to devise the plan that would safely bring the ship home.

Kranz was the keynote speaker at the THC’s Real Places conference earlier this year. His first-person account of the historic events he helped orchestrate from Mission Control was gripping. Many conference attendees claimed it was the highlight of Real Places, and Kranz’s compelling story revealed his heroism and NASA’s significance to Texas and world history.