How to Outsmart a Cowboy 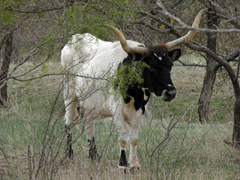 As manager of the Official State of Texas Longhorn Herd at Fort Griffin State Historic Site, I get to interact with the cattle quite a bit. It is remarkable how intelligent these animals are. Combined with their natural instinct for survival, this intelligence produces some amazing examples of longhorn behavior—including when they interact with ranch equipment such as pens.

Cattle seem to have a general aversion to being closed up in pens—and in some of our longhorns, this disinclination appears to have developed into an extreme phobia. We have an old cow here at the fort named Miss Apache. She turned 23 in March, and she’s quite a character. She’s not a pet, but she’ll come right up next to me and eat while I feed the cattle. However, like some of the other old steers, she doesn’t like to go into the pens—and she definitely doesn’t like the gate shut behind her!

About a year ago, I needed to pen the cattle in one pasture at the fort in order to move them to another, so I fed them in the pens. Most of them filed in as usual, but Miss Apache came as far as the gate and stopped. I gave her some room, and she finally walked in. As I slowly made my way to the gate, her old head popped up from eating cubes, and she made a mad dash for the gate. But she didn’t run off. She stopped just outside the gate, turned, and looked at me. If a cow could smile, she would have had a great big grin.

She seemed mighty proud of making it out the gate before I could even get close. I decided to get in the pickup, drive off a ways, and see if she would go back in. Watching through binoculars from about a quarter-mile away, I saw her march right back in the pens and begin eating again with the other cattle. So I drove up nice and easy and slow, stopped quickly, and made a fast run for the gate. Miss Apache was too quick. She was out the gate before I could get to it.

I decided to try a different tactic, thinking she needed to get used to me driving by the pens. The first couple times I drove by, she made a run for the gate. Then she decided I wasn’t trying to shut it and continued eating as I drove past a couple more times. I tried my drive-slow-stop-and-run-for-the-gate routine once more. She beat me again! So I tried driving by some more. If I even took my foot off the throttle while driving by the pens, she would be out the gate in a flash. But if I drove by without slowing, she would continue eating calmly.

I gave up, closed all the cattle in the pen except her, and opened the gate to the other pasture. Then I took part of a sack of cubes and walked down behind the pens to another gate. Miss Apache followed every step of the way, and quietly followed me through the gate to the pasture with the other cattle. As she ate her feed that I had poured out, she had a very satisfied look on her face. She had avoided being shut in the pens, ate plenty of feed, and trained one cowboy in the proper way to move smart old cows!

Read more about the Texas Longhorn in the Handbook of Texas Online.

I enjoyed your story. I have raised these wonderful animals in Texas and California since 2002 and agree that they are very intelligent. Stubborn, loving. Once they start getting out it's almost impossible to stop that bad habit. Anyone who raises them has great stories to tell. I drove through and got to see some of the herd last year. I hope you are getting some of the rain I've been seeing in Texas!