The stories of El Paso's Magoffin family are intertwined with the diverse dynamics of the borderland in the late 1800s. These are the real stories of people whose lives were impacted when Joseph and Octavia Magoffin moved into their new home in 1877.

Servants were an integral part of keeping the Magoffin Home State Historic Site functioning and comfortable. José Sierra was a servant of the Magoffin family for many years. His early life is uncertain, but he was born in El Paso and taken into the Magoffin home as a boy.

The Magoffin family was bilingual, so José’s ability to speak English would not have been an issue. He is listed as both a coachman and a servant.

Some of Joseph Magoffin’s grandchildren related stories about José when they were interviewed. 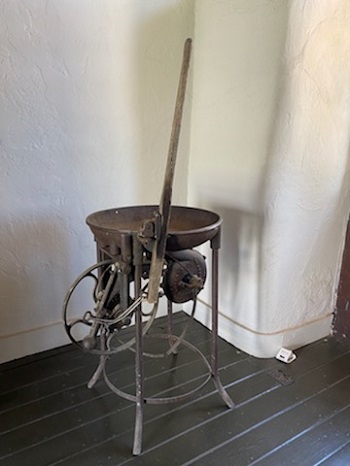 “José Sierra. He really did the job of a trojan. Bringing in wood, chopping wood, keeping the fireplaces going.”

“Right there we had a lovely fancy old wood box and he would fill that with wood every morning, and then he would go from room to room and light the fires. That was all the heat we had when it was very cold….  He would bring in centipedes, scorpions, and everything else on the wood.”

“When it rained, we had a balloon ceiling on the vigas, but it had a cloth nailed to it and painted, and the water would leak and balloon in there and we had to take a stick with a nail and puncture it and put a tank under to catch that water. [The manta or canvas covering that hung from the rafters would fill with water.] Sometimes it would really flood, and we had to do that frequently, there was some semi-tropical rains once in a while.”

“We had it in all the rooms [leaks], and we had the same difficulty in all the rooms particularly in the living room. When it rained, we all got out the buckets, the big wash tubs and so forth to catch the rain. And then we had to get José with a pail with blind cement and try to find it [the hole in the roof] and fix it.”

“Old José, the yardman, would milk them every night [cows]. He would bring the milk in and he would put them in round trays about 5 or 6 inches deep and put them in the icebox…. They would skin the cream off and get beautiful ice cream.”

These are compiled statements from the four children of Joseph’s son, James Willey Magoffin II—Mary, Joseph, and Jim Magoffin, and Mary Magoffin Carter.

His 1921 obituary states, “Funeral services for Jose Sierra, 70, Indian servant in the Joseph Magoffin home for half a century, who died Saturday morning, were held at the Peak-Hagedon undertaking establishment yesterday afternoon."

Burial was made in Concordia cemetery. He was survived by a brother at Ysleta. He was unmarried.