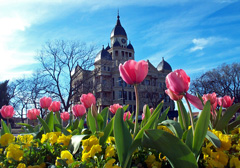 At any time, day or evening, you can stroll around the City of Denton’s courthouse square and find something to draw you in: a local café and coffee shop, a store brimming with used books, or a group lounging on the courthouse green while someone plays a guitar. In the center is the restored 1896 Denton County Courthouse anchoring the nearby activity.

"The area around the square is our living room—a gathering place for the community," says Denton Main Street Manager Julie Glover. "And the wonderful thing is to have other people doing events here, not just Main Street. In the last seven or eight years it has really ramped up." 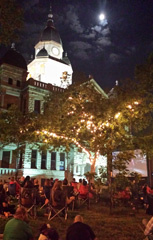 Glover noted the square seems to be bustling "24/7" with early morning yoga on the courthouse lawn, music on Thursdays during Twilight Tunes from late April through July and again in the fall, and film festivals or outdoor movies such as the Alamo Drafthouse Cinema’s showing of "Back to the Future." The "face" of the square is full, and new businesses, such as a small grocery store with fresh produce from the farmers market, are filling up the areas off the square, she said.

It’s no surprise to those involved in courthouse restoration and community development that Denton has a thriving downtown surrounding the square. A blend of Romanesque Revival and Second Empire styles, the courthouse was rededicated in 2004 after participating in the Texas Historical Commission’s (THC) Texas Historic Courthouse Preservation Program (THCPP). It is one of 63 fully restored county courthouses, with another 28 having received emergency or planning grants for smaller projects since the program’s beginning in 1999. 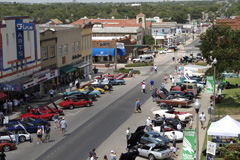 Denton received the THC’s First Lady’s Texas Treasures Award in 2014 in recognition of more than 40 years of sustained preservation efforts. Denton has completed over 340 rehabilitation projects in the past 26 years, investing $76 million in historic preservation, opening 350 businesses, and creating more than 5,000 new jobs. For 25 years Denton has participated in the THC’s Texas Main Street Program.

Towns with historic courthouses often become heritage tourism destinations for visitors from other states and countries, and sometimes the courthouse has a role in a major motion picture, such as "Lone Star," "Bernie," and "The Tree of Life." Nearly half of Texas’ restored courthouses are in a Main Street community.

"A restored courthouse can serve as an anchor to a vibrant town center," said Sharon Fleming, director of the THC’s Architecture Division, which oversees the THCPP. "It becomes the force for economic renewal in urban and rural communities and a source of community pride for residents."

In Denton, the residents and visitors seem to agree: the downtown courthouse square is a center of activity and the place to be.

Through matching grants, the THCPP helps restore and preserve Texas’ historic county courthouses to their original splendor and make them safe, functional, and a source of pride for Texas communities. To learn more about the benefits of restoring historic courthouses, download a free copy of the THC’s Courthouse Cornerstones (PDF) or visit the THCPP online.

A sense of ownership is another benefit of having a restored courthouse and a thriving town square. I love Denton CHOS and shopping and eating on the Square.