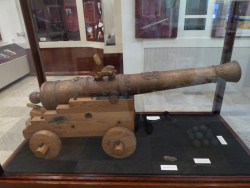 Beneath the vaulted, hull-like ceiling of the THC’s library in Austin, Jim Bruseth cast his gaze askance as if reconsidering the course of the story he had already begun to tell. Bruseth—our former Archeology Division Director who discovered and excavated the remains of La Salle’s ship, La Belle, in Matagorda Bay—visited the THC in January 2015 to assist Heritage Tourism Program staff as we developed content for the La Salle Odyssey mobile tour.

Righting his gaze and clearing his throat, Bruseth continued, “After we found La Belle in 1995, I worked with several French curators to decide which La Belle artifacts would visit their museums in France. While happy to collaborate, many of my French colleagues expressed their puzzlement at why Texans historicize La Salle at all.” He explained, “Texans embrace La Salle as a quasi-founding father figure, which is fairly strange given that La Salle was unable to establish a lasting settlement in Texas and that we do not see any French cultural heritage practiced in Texas today. In contrast, our French colleagues view La Salle largely as a failure.”

Fascinated by the proposition, I asked Bruseth, “If Texas has no lasting cultural connection to France, why do Texans memorialize La Salle?”

An enigmatic smile spread across Bruseth’s face as he responded, “Good question.”

Intrigued by Texan affinity for the character of La Salle, I later took the La Salle Odyssey mobile tour on the road to find out why Texans maintain such reverence for the ill-fated French explorer. The mobile tour guides travelers to exhibits held in seven museums along the Gulf Coast and in Austin, and supplements the exhibits with audio tracks, galleries of historic photos, and documentary-style short videos that feature the archeologists who excavated La Belle and Fort Saint Louis (see an example below). The museums’ exhibits contain artifacts the archeologists uncovered and explore topics related to the story of La Salle’s expedition. By visiting all the exhibits while using the La Salle Odyssey mobile tour, travelers learn the whole story of La Salle’s attempt to settle North America, and gain inside perspectives into the way archeologists, historians, and museum curators think about La Salle and his expedition today. 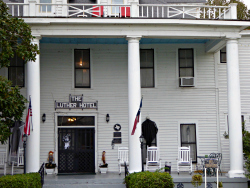 Mobile tour in hand, I began my trip in Palacios, overnighting at the Luther Hotel, a Texas Treasure Business Award-winning establishment that’s also listed in the National Register of Historic Places. Jack Findley owns and operates the Luther Hotel and remembers when Bruseth and his team of archeologists stayed at the Luther while excavating La Belle. With the shoreline of Matagorda Bay just paces away from the Luther’s front porch, Findley recalled the days of the excavation, “It was quite a sight for me—and for all of Palacios—to see these archeologists coming and going, so excited about what they uncovered in the bay. Local people would ride in their own boats out into the bay just to watch the archeologists at work. People in Palacios also drove barges out to the dig site to help the archeologists. Many Palacios residents even volunteered to prepare food for the archeologists. I think the whole project really encouraged Palacios to feel like we played a part in something bigger than ourselves and our town. The project connected us with people from all over the state.”

“Do you think people in Palacios value the history of La Salle more now because of the excavation of La Belle?,” I asked.

“Absolutely! Before the excavation, most people never encountered mention of La Salle in Palacios, except maybe in elementary school, you know? But after the excavation, we opened the City by the Sea Museum to hold artifacts uncovered in the bay. Now local children and their parents frequently visit the museum,” Finley explained. “Some other folks here in Palacios even built a half-scale replica of La Belle. They call it Le Petite Belle and sail it up and down Matagorda Bay during celebrations and holidays. These projects really give Palacios a boost in tourism. If we didn’t have a reason to remember La Salle before the excavation, we certainly do now.”

Upon entering the museum, she directed me to the La Salle exhibit and—pointing toward a prominently displayed brass cannon—recalled the archeologists who first discovered La Belle’s location, “This cannon is what confirmed the location of La Belle’s remains. The archeologists dove into Matagorda Bay, and saw those beautiful brass handles sticking out of the mud—they knew they found La Belle at last.”

Smith then began to talk about what La Salle’s history and the museum’s corresponding exhibit mean for Bay City residents. Her passion was infectious. “I’ll put it to you like this,” she said. “My father married an Egyptian woman, and he now lives over there. When we opened our exhibit in Bay City after the La Belle excavation, my siblings called immediately from Egypt to tell me they saw us on the news!” Smith explained, “Our La Salle exhibit put Bay City in touch with the global community. Travelers from all over now come here regularly to learn about La Salle. I don’t know for sure, but I doubt anyone in Egypt or any other country would know about Bay City if it weren’t for the marvelous history we now hold in this museum. The history of La Salle and the story of the excavation of La Belle give us something to share and be proud of.”

I then asked, “So, people in Bay City don’t relate to La Salle because of a French cultural connection?”

“No”, she replied. “Had he succeeded in settling Texas, I would answer differently. Maybe Texas today would be more like Louisiana.”

After leaving Bay City, I stopped at the Museum of the Coastal Bend in Victoria, whose La Salle exhibit focuses particularly on the excavation of Fort Saint Louis. Museum director, Penelope Ray, offered to walk me through the museum’s La Salle exhibit and discuss her understanding of Texan connections to La Salle. Ray received her academic training at the University of North Carolina, where she developed her passion for shipwreck archeology. While later working at the Corpus Christi Museum of Science and History, she became involved in cataloging artifacts found on board La Belle.

Standing near a glass display box backed with an image of a spiny, white orb, Ray began, “Many people forget the incredible feat that transatlantic sailing represents in the days of colonial North America, and as such, people often underestimate the impact the arrival of even a single ship could have on the receiving environment.”  She elaborated, “This display, for instance, explores the ethnobotany of the La Belle. I trust you are familiar with the sticker burr—you know, the annoying spiny seed that clings to your socks when you walk through tall grass? Well, archeologists found a sticker burr on La Belle. It is one of the oldest such seeds found in North America, suggesting that the La Salle expedition may have brought the seed to North America. While not exactly a flattering fact, it is yet another way Texans are impacted by and connected to the history of La Salle. Of course, one would have to know about the sticker-burr’s origins to feel any linkage to La Salle. Our museum helps to establish those connections for visitors.”

Moving through the exhibit, we arrived at an interpretive panel adjacent to a museum display that contained six cannons uncovered during the Fort Saint Louis excavation. “I think another reason why people who visit our museum feel connected to La Salle and his expedition is because we offer an impactful, subjective view into the lives of the people who arrived with La Salle,” Ray said. “For example, when Fort Saint Louis was excavated, archeologists found not just cannons—impressive as they may be—but the remains of several French colonists. One of the recovered skulls was found shattered in several pieces. We worked with an artist to scan the fragments into a digital environment and then 3-D print a replica of the skull. The artist then created a bust of what the colonist likely looked like, which we now house in our museum. This helps remind visitors that this history is not just a fantasy. Real people lived these stories.”

En route back to Austin, I stopped in Indianola to view one of Texas’s statues to La Salle. He gazes over Matagorda Bay where La Belle sank into what could have been an anonymous grave in the waters of historical obscurity. As waves gently lapped the shoreline at La Salle’s feet, I reflected that absent any continuous cultural tie to La Salle, his history remains important to Texans in many different ways. In our rapidly growing, multicultural state, perhaps the question that inspired my journey is better asked: how will the histories of La Salle developed in past generations refigure into the rapidly changing cultural contexts of the new, and for whom over time will the figure of La Salle gain or lose importance? Brushing the sticker burrs from my pant leg, I shut my car door while casting a final glance at La Salle—whose sculpted eyes still search the horizon—and drove north.

Ready to take the La Salle Odyssey on your own? Download our mobile tour and check out additional resources on our La Salle theme page at TexasTimeTravel.com.