Learning About Life at Fort Griffin 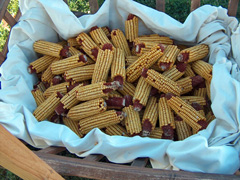 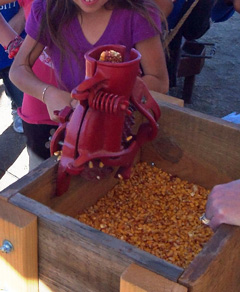 In Fort Griffin’s frontier kitchen, we started the discussion in the imaginary corn field where dent corn was grown. We explained how, in the 1870s, corn wagons bringing vital supplies from Denison or Fort Worth to Fort Griffin were often destroyed during Indian raids, so the military asked area farmers to grow corn locally for the fort. At one point, more than 1,000 acres of corn were planted.

After the corn was dried in the field, it was brought to the fort where it had to be shelled. With a reproduction 1876 sheller, visitors to our frontier kitchen could remove the corn kernels from the cob with this interesting mechanical device. Next, we ground the corn into either animal feed or corn meal. Once we had enough corn meal, we talked about what could be made from the corn meal, such as corn bread, corn tortillas, or grits. 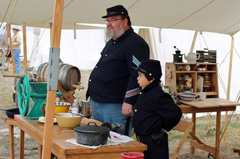 For this event, we discussed how to make corn bread and asked folks if they wanted butter with their corn bread once it was done. If they answered “yes,” then we told them they had to go milk the cow, and we handed them the butter churn so they could churn up some butter. Next, we asked if they wanted chicken or pig with their corn bread. After they chose we instructed them to go catch it, kill it, and prepare it for cooking. Of course, once all of this was completed, they still had to cut the fire wood and build a fire—all this for one imaginary frontier meal. 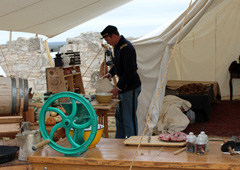 We also demonstrated campfire cooking by fixing quall, bacon, potatoes, and/or beef or other items available to soldiers on the frontier. Eric baked up a few pans of biscuits, which was a big hit with hungry visitors. It is amazing how many people will stand and listen to stories about life on the frontier when promised a taste out of the pan as soon as it is done! 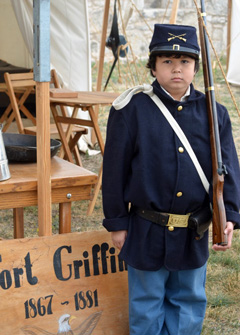 We even had a new soldier join the military, although I wondered about his age. During the Civil War and the Indian Wars, it was a common practice for underage recruits to stand on a piece of paper tucked in their shoe with an “18” written on it. When asked to swear that they were “over 18,” they could answer truthfully that “yes, they were over 18.” I think this recruit had an 18 in his shoe!

We had a lot of fun this year at Fort McKavett and look forward to next year!