When the United States entered the Great War in April 1917, conflict in Europe had been raging for 32 months. By all accounts, the nation was unprepared in terms of men, equipment, training, and combat experience to be an effective partner in defeating Germany and its allies.

Nowhere was this more evident than in the Aviation Section of the U.S. Army Signal Corps. In his 1931 book My Experiences in the World War, Gen. John Pershing recalled:

“Of the 65 officers and about 1,000 men in the Air Service, there were 35 officers who could fly. With the exception of five or six officers, none of them could have met the requirements of modern battle conditions and none had any experience with aircraft guns, bombs, or bombing devices. We had some 55 training airplanes in various conditions of usefulness, all entirely without war equipment and valueless for service at the front.”

By 1918, the U.S. was considerably more prepared, thanks in part to Texas resources. Hundreds of airplanes and servicemen were housed at training fields across the Lone Star State. Texas bases provided training for flying, bombing, aerial gunnery, aircraft repair, and other duties.

This assistance was set in motion when the Air Service and Royal Flying Corps Canada (RFC) developed plans in May 1917 for the Canadians to train pilots and ground support personnel to man 10 squadrons for the Air Service. In exchange for their support, the RFC could continue training at fields in the U.S. during the harsh Canadian winters.

During the summer of 1917, the RFC began training Air Service pilots and ground support personnel alongside Canadian, British, and American airmen of the RFC. Over a five-day period in November 1917, the RFC moved its training program and 254 aircraft to Texas, where it continued cadet training during the winter of 1917-18. Two training wings of five squadrons each and their School of Aerial Gunnery occupied three Fort Worth-area fields (Barron near Everman, Carruthers at Benbrook, and Taliaferro 12 miles north of Fort Worth near Hicks Station). The 10 American squadrons that began training in Canada left Fort Worth for England and France between December 1917 and March 1918.

Aviation activity also provided an economic influx for Texas communities that hosted training facilities. The U.S. Congress appropriated a mind-boggling sum of $640 million for aviation ($11 billion in today’s dollars). The Air Service set about the seemingly impossible task of building an air force from scratch to meet the demands of the Allies in Europe. Its initial tasks were to create a network of training schools and flying fields; develop curriculum for pilot training and technical support skills to assemble and maintain aircraft, engines, and other combat equipment; and acquire training airplanes and instructors. There was no shortage of recruits.

The training program they developed evolved through ground schools and primary pilot training, then moved to advanced training in pursuit, bombers, and observation aircraft. The Air Service created Schools of Military Aeronautics (SMA) at eight universities to provide ground training for prospective pilots.

The University of Texas at Austin hosted one of those schools, which was largely staffed by college faculty members who taught courses on aeronautics, engines, and meteorology. Army instructors provided basic military training to the new recruits. Penn Field was also established near Austin’s St. Edwards College to support the SMA program; it later became an aviation radio training school operated by the university.

Camp Dick on the Texas State Fairgrounds in Dallas was established to temporarily house recruits from the ground training schools until they could be assigned to one of the flying training fields. Initial phases of gunnery training were also conducted there.

As space became available, candidates were assigned to one of the primary aviation fields for flying training. The fields also trained ground support personnel to maintain, repair, and overhaul aircraft, engines, and other aviation-related equipment. Specialized schools were also created to teach radio, aerial photography, and meteorology. 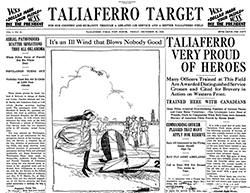 By early 1918, the Air Service had constructed 28 aviation fields to support its training program. Each field occupied about one square mile and was built using a standard layout and set of plans for hangars, barracks, mess halls, classrooms, repair shops, a hospital, and other support buildings to accommodate up to 400 cadets. Each field cost around $1 million, required over 4 million feet of lumber, and employed more than 700 carpenters and 1,200 other workers during the typical eight-week construction phase.