“Man the halyards!”
“On the main—rise tacks and sheets! Mind the spinnaker!”
“Brace lively to the wind!”

These ancient nautical terms flutter through the gusty Gulf Coast breeze aboard the 142-year-old Elissa, one of the only ships of its kind restored to full sailing capacity. The formerly moored vessel now departs Galveston for occasional adventures at sea, allowing local volunteers and visitors from across the world to experience the historic art of barque sailing. 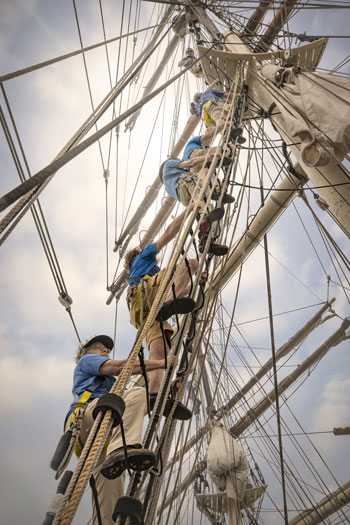 Participants can grasp the hearty weathered lines (don’t call them ropes) and assist with raising Elissa’s 19 massive square sails. Hundreds of years ago, a vessel like this operated with a crew of 12. Now it takes a few dozen volunteers to take her on the coastal waters.

“She handles really well for a 140-year-old vessel,” said Elissa Captain John Svendsen. “Every once in a while, I’ll stop and really soak up the history of this ship and how special it is to have this experience. It’s a real trip back in time.”

Elissa’s origins are traced to a shipyard in Aberdeen, Scotland, where she was constructed as an iron-hulled, three-masted barque and launched in October 1877. For nearly a century Elissa traveled across the world, primarily as an independent freight ship, according to the Texas State Historical Association.

Throughout the early 1900s, she tacked among several Scandinavian owners and names (including Fjeld and Gustaf) while carrying lumber and general cargo. Over time, her sails and masts were dismantled in favor of motors. 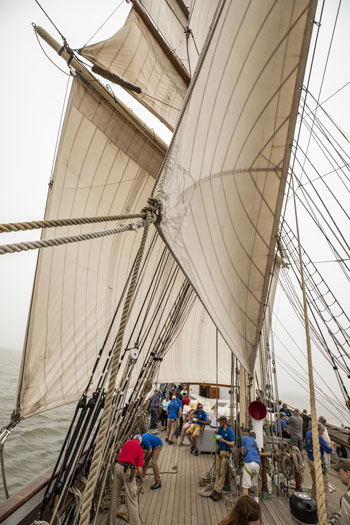 During 19th-century voyages, Elissa made many stops at U.S. ports, primarily in New York, Boston, Savannah, and Pensacola. Historical records also indicate she stopped at Galveston for cotton shipments in 1883 and 1886. This

local connection, along with the authenticity of her sturdy iron hull, prompted the Galveston Historical Foundation (GHF) to purchase the ship in 1975 and undertake its restoration.

“Everything you see on her today had been stripped—she had a single cargo loading crane, and looked nothing like the vessel you currently see,” said GHF Port Captain Mark Scibinico during a recent excursion on the gulf. “She was the pinnacle of technology in 1877—the iron encasing the hull is up to 9/16ths of an inch thick, which is unheard of now. They built it like a wooden vessel.”

Elissa’s restoration was painstaking, with extensive repairs to the hull and construction of new masts, sails, rigging, and the entire deck. Work was completed by 1982, when Elissa opened as a tourist attraction. She was designated a National Historic Landmark by the National Park Service in 1990. Until recently, Elissa was docked as part of the Texas Seaport Museum, but Scibinico’s diligence in navigating the regulatory seas of Sailing School Vessel certification resulted in Elissa’s status as seaworthy for the public’s educational benefit.

With this standing in place, the GHF set to work seeking hardy volunteers to immerse themselves into the seafaring lifestyle by training to become crew members. More than 80 area residents grasped the opportunity to climb aboard and learn the ropes, either in the ship’s elaborate rigging or on her wooden decks. 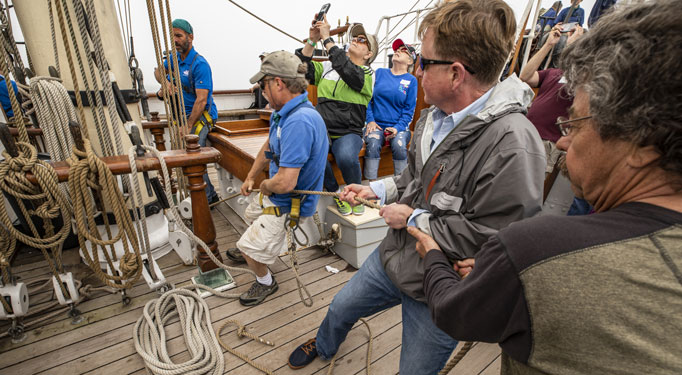 The volunteers train with GHF’s Seamanship Training Program, which takes seven months (including 20 Saturdays) and 130 hours to complete. Participants can learn deck-based roles or pursue perilous opportunities like rigging, where they ascend the ship’s 99-foot-tall main mast and unfurl massive sails among the intricate machinery of wood, wire, and rope.

“These types of tasks require skill and bravery—it’s true living history when you’re aboard this vessel,” Scibinico explains. “Without our dedicated crew of volunteers, this ship is just a static piece of iron. We’re connecting maritime history to everyone who experiences the Elissa.”

ALL HANDS ON DECK
The Galveston Historical Foundation has relied on volunteers for more than three decades. For those interested in learning the ropes of sailing the 1877 Elissa and the campaign to keep her sailing, visit the GHF site or call 409-763-1877. Tickets will be available later this year to sail on Elissa for a day of instruction in April 2020.