Linked by Land and Sea 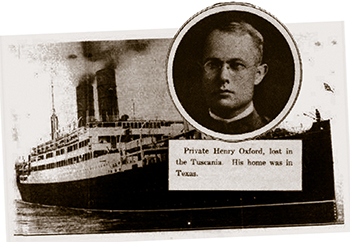 We don’t know if Henry Grady Oxford and Robert Lee Melbern knew each other in life. At the outbreak of World War I they both lived in Coryell County, and their farms were about 10 miles apart. We do know that these young men living parallel lives on Central Texas soil embarked upon similar lives of service for their country and are forever linked in death.

Henry Oxford was born in 1893 at Turnersville, a rural settlement along the Middle Bosque River and about 10 miles north of Gatesville. In the fall of 1910, Oxford and several Turnersville classmates enrolled in Daniel Baker College in Brownwood. In October 1917, he was inducted into the U.S. Army.

Oxford and other troops were given the temporary designation of 2nd Casual Company as they boarded SS Tuscania in Hoboken, New Jersey on January 24, 1918. After a journey of nearly two weeks, the converted luxury liner carrying more than 2,000 American troops was torpedoed by a German submarine and sank within sight of the Scottish coast near the island of Islay.Tuscania became the first ship carrying American soldiers to be sunk in World War I. More than 200 troops died that night, at least
40 of them from Texas. Henry Oxford was among the casualties. 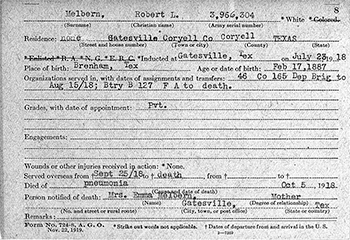 Robert Melbern was born in Brenham in 1887, and grew up on his family’s farm and ranch six miles west of Gatesville. His father, Edward Fred, was a Fayette County native; his mother, Emma Bertha (Schloeman), was born in Germany. Robert joined the army in July 1918.

Melbern and his fellow soldiers boarded HMS Otranto, an armed merchant cruiser of the British Navy, in New York City on September 25, 1918. The ship was part of a convoy that neared the Scottish coast two weeks later in a fierce storm, and after daybreak on October 6, Otranto collided with the cargo liner HMS Kashmir in the same seas where Tuscania sank eight months before. More than 470 lives were lost, with Robert Melbern among them.

Each man is memorialized in meaningful ways. Oxford’s gravestone in Prairie View Cemetery near Turnersville illustrates his military service and notes that “He Lost His Life on the Tuscania.” His siblings established a scholarship in his name at Daniel Baker College, and catalogues show that the scholarship was still offered a generation later during World War II.

Robert Lee Melbern’s name is among those at Suresnes American Cemetery near Paris, a final resting place of American troops from both world wars. Bronze tablets on the chapel walls record the names of 974 men missing from World War I. He also has a military headstone in his family plot at Gatesville City Cemetery.

One of more than 200 individual bronze plaques placed in the 1920s honors Melbern at the University of Texas’ Memorial Stadium, dedicated in 1924 to the war dead. And Melbern and Oxford are closely tied in another way, with “Melbern, R. L.” and “Oxford, H.” listed close together on a 1931 bronze tablet outside Memorial Stadium. With the names of more than 5,000 Texas casualties from World War I, the tablet illustrates the statewide scope and the local loss that are part of the legacy of World War I in Texas.

Learn more about the THC’s efforts to commemorate Texans in the Great War.