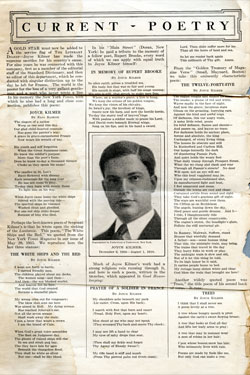 Our Sam Rayburn House Artifact of the Month is a page from The Literary Digest, dated August 31, 1918.

The Literary Digest was a general interest magazine published between 1890 and 1938. It contained news stories, poetry, and opinion pieces.

This page from The Literary Digest was at some point torn from the rest of the magazine and saved. This page is dedicated to onetime Digest contributor and poet, Joyce Kilmer.

Alfred Joyce Kilmer was born in New Jersey in 1886. He developed an interest in prose and the written word as a grammar school student, becoming the editor of his school’s newspaper when he was just eight years old. He attended classes at Rutgers College and then transferred to Columbia University in New York City where he graduated in 1908.

Kilmer wrote book reviews for The Literary Digest and The New York Times before focusing on his own writing career. He published several books of poetry, lectured extensively, and had poems and essays published in multiple magazines.

Though writing was his passion, Kilmer followed the call to arms when the U.S. entered World War I in April 1917. He signed up for the National Guard days after the war declaration in 1917. While serving overseas in France, Kilmer found free time to continue writing prose and poetry, hoping to publish a book about the war. The book never came to fruition. He was killed in action in France on July 30, 1918. He was 31 years old and he left behind a wife and four children.

During his short life, Kilmer made a major impact on the world of prose and poetry. His poem “Trees” is likely the most famous of his works. The poem includes the memorable phrase, “I think that I shall never see / A poem lovely as a tree.”

The Digest page was recently discovered at the Sam Rayburn House State Historic Site between the pages of one of “Mr. Sam’s” encyclopedias. The encyclopedias remain on display in the Rayburn home’s sitting room — Sam’s favorite room in the house.

While we do not know which member of the Rayburn family saved this page, we can assume it was important enough for them to keep it as a remembrance of poet Joyce Kilmer.