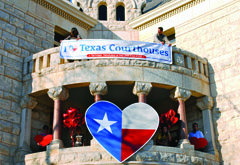 Historic Texas courthouses have been basking in the spotlight this year, allowing these iconic structures to be flattered in a luminous glow. Dozens of distinctive courthouses have been highlighted in national and statewide awareness campaigns, bringing needed attention to their significance in Texas history and continuing need for preservation.

The activity swelled in February, with countless Texans showing support and appreciation during a month-long “I Love Texas Courthouses” campaign, developed by the National Trust for Historic Preservation in conjunction with the Texas Historical Commission (THC) and Preservation Texas.

Appropriately, on Valentine’s Day, U.S. Congressman Ted Poe (R-Humble) expressed his love for Texas courthouses in the official record of the U.S. House of Representatives.

A former criminal court judge from Houston, Poe states, “As a judge, I traveled to other counties to try cases. Along the way, I began to photograph Texas’ historic courthouses. I was drawn to their impressive and varied architecture. Built with bricks, stone, and stained glass, some have clock towers; others have domes. Each is unique. I like the Renaissance Revival style of the Anderson County Courthouse and the Romanesque Revival style of Fayette County Courthouse in La Grange.

“Along the way, I learned that other Texas officials shared my love and admiration for our state treasures,” Poe says, adding that in 1998, “my friend and then-governor George W. Bush, together with the Texas Historical Commission, established the Texas Historic Courthouse Preservation Program.”

Throughout February, preservation leaders invited local courthouse supporters to show their love for these significant structures through online photo and story sharing, Valentine heart-making, and a group “love letter.” 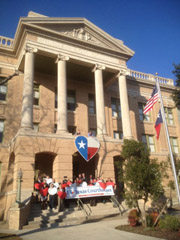 The campaign and partnership was spearheaded by the National Trust, which named Texas historic courthouses to its list of America’s 11 Most Endangered Historic Places in 1998 and again in 2012. The initial listing spurred the creation of the THC’s Texas Historic Courthouse Preservation Program, which has awarded $247 million to more than 80 counties for the preservation of their county courthouses. The program has served as an important economic engine for Texas, with courthouse restorations generating nearly 10,000 jobs, more than $22 million in state taxes, and an additional $21 million in local taxes.

“Recognition for this award-winning program has gone all the way to the White House, where it earned a Preserve America Presidential Award in 2008,” said THC Chairman Matt Kreisle. “All counties participating in this program should be very proud of their efforts to help preserve the real places of Texas.”

“Dating from the 1860s to the 1950s, Texas courthouses are symbols of a county’s wealth, commerce, geography, and a great source of community pride and identity,” said James Lindberg, field director of the National Trust. “We take their preservation very seriously. Yet we hope this campaign has helped bring to light, in a fun way, just how much these courthouses mean to Texas.”

The successful “I Love Texas Courthouses” campaign was unveiled during the rededication ceremony of New Braunfels’ newly restored Comal County Courthouse in January of this year. Its stunning restoration was made possible by more than $3.4 million in grant funds from the THC’s Texas Historic Courthouse Preservation Program.

Construction began on the project in November 2010 to return the 1898 courthouse to its former glory. The building was designed by renowned Texas courthouse architect J. Riely Gordon, and constructed of native Texas limestone in the Romanesque Revival style.

The interior spaces are arranged in a Greek-cross plan with a central stairwell to facilitate natural ventilation through the courthouse tower. Entrance porches are supported by polished Moorish-inspired columns of pink granite, topped with carved detail.

Prior to construction, several artifacts were discovered in the courthouse basement, which helped confirm the courthouse’s original appearance, including an ornate cast iron vault doorway and original casement window sashes. During the restoration, contractors discovered original porch tiles thought to no longer be intact.

“There are few places that can strengthen an entire community, but a restored cherished courthouse truly will,” says Sharon Fleming, director of the THC’s Architecture Division. “We’ve seen it happen throughout the state, whenever a county joins our program to bring their beloved courthouse back to its original splendor.”

Congressman Poe adds, “Budgets are tight all around, but I think these treasures are worth saving. This summer, as you pack up the family and head across our great state, get off the interstates and drive downtown to any Main Street. There you can share a little Texas history with your kids and grandkids. On each Main Street is a Texas treasure.” 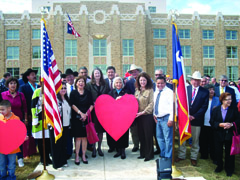 A few days after the Comal County rededication ceremony, another Texas courthouse had its moment in the spotlight. On January 26, the La Salle County Courthouse was rededicated, following a long-awaited, two-phase restoration made possible with a $5.75 million grant from the Texas Historic Courthouse Preservation Program.

One of several restored courthouses dating to the 1930s, the impressive building was designed by noted Texas courthouse architect Henry Phelps. The La Salle County Courthouse is considered his last, most ambitious, and imaginative courthouse design. The elegant courthouse sits in the center and highest point of Cotulla, facing the historic city square.

The four-story, concrete frame building is constructed of tan brick with use of gilded terra cotta decorative elements, reflecting a transition from the more ornate Art Deco to the Moderne style favored in the 1930s. The gilded spread eagle seen above each entrance is a national symbol, indicating freedom, strength, and prosperity.