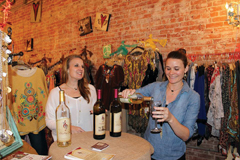 This year, the Texas Main Street Program is celebrating 35 years of progress. What began as a small start-up process to test a revitalization concept for Texas’ historic downtowns has become a significant program—one of the country’s largest—that provides visible and measurable economic benefits to local communities.

Success was not certain in the 1980s, when the National Trust for Historic Preservation introduced a formal approach to preservation-based downtown revitalization. The program’s basic framework, the Main Street Four Point Approach, had only been field tested. Could a localized operational model be rolled out from a national organization? And could that be implemented through a statewide program? Turns out, it could.

Today, the Texas Historical Commission (THC) works with 87 actively participating Main Street communities. They represent all areas of the state and are all sizes, from Goliad (population 1,908) to Corpus Christi (population 320,434), now the largest Main Street program in the state.

Just as importantly, Texas Main Street communities are real places where unique small businesses prosper and where people gather. They are places where memories are made and new ones are born.

During Main Street’s 35-year history, 177 Texas communities at some point have been designated. Main Street communities show a true commitment to restoring the economic vitality of their historic downtowns by funding staff and a local program. Dedicated volunteers contribute their skills, talents, and resources to create the community buy-in that is a big part of the success.

Although all of Texas’ 87 Main Street cities have contributed to the program’s success, the following communities in the Texas Independence Trail Region (see related heritage travel article on page 6) offer an impressive representation of participants’ tenure, size, and economic development projects.

Located 25 minutes southwest of Houston, Rosenberg dates to 1883, when the Gulf, Colorado and Santa Fe Railway laid out a town site named after the company’s president, Henry Rosenberg

Today, Rosenberg is experiencing unprecedented growth in commercial and residential development, while holding tight to its historic charm. The downtown offers an authentic American experience that includes a mix of cultural arts, shopping, dining, and history. In recent years, downtown property owners have restored several historic buildings and filled them with restaurants and shops.

In 2013, downtown Rosenberg was named a Texas Cultural Arts District, and in 2014, it was officially designated as a Texas Main Street city. During its first year, the Rosenberg Main Street Program has held community planning meetings and started to implement identified goals, including a façade improvement matching grant program, a beautification matching grant program, and a systematic program of promotional events and festivals. Rosenberg’s downtown improvement efforts are off to a solid start, and Rosenberg’s residents anticipate a future that is as prosperous and culturally rewarding as its past.

As Rosenberg Mayor Cynthia A. McConathy notes, “The Main Street Program has given us the tools to enhance our downtown, which is the very heart and essence of Rosenberg.” 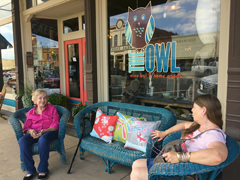 Elgin, Sausage Capital of Texas and a Texas Main Street city since 1990, is experiencing a new wave of reinvestment and development in downtown. Since 1990, the public and private sector has invested more than $14 million in the downtown district. These investments preserved iconic buildings, replaced dangerous infrastructure, and helped make downtown Elgin attractive to residents and investors.

Established in 1872, Elgin developed around the railroads and had a thriving economy built on bricks, sausage, and cotton. In the mid-1980s and the 1990s, the community rallied around the importance of its historic downtown, and supported major public projects and private reinvestment in its commercial buildings.

After the last economic downturn, Elgin was reeling from many business closures that left downtown looking like a ghost town. In 2011, Elgin applied for and was chosen to participate in the Sustainable Places Project, which recommended zoning changes and downtown improvements. In September 2014, the Elgin City Council approved zoning crafted by the Main Street Board and the Historic Review Board that allowed for work/live space downtown and increased the variety of permitted business uses.

In January 2015, a downtown property sold and the new owner implemented new zoning allowances, becoming the first
Main Street building to have commercial at the front and residential in the rear. The owner also utilized the newly available Texas Historic Preservation Tax Credit Program, the Federal Historic Preservation Tax Incentives program, and a local grant program.

Beginning as a truly grassroots movement, La Grange Main Street dates to 1996 when a group of passionate advocates turned the tide in their community. Because of the commitment of public and private funds, the downtown square now features a fully restored county courthouse, a quaint Founders Park, new sidewalks, and underground power lines. The Main Street Program also hosts many events, including La Grange Uncorked, a weekly farmers market, and a summer movie series on the courthouse lawn.

“The Square itself is home to many cultural treasures,” says Stacey Norris, La Grange Main Street and Tourism Manager, noting that Prause Meat Market, family-owned by fourth-generation Texans of German descent, has been “perfuming La Grange with its barbecue since the 1890s.” She adds that the Texas Quilt Museum showcases antique and contemporary quilt art in two 1890s buildings, and the square features a bakery housed in the same building since 1928.

Bastrop, situated just east of Austin, entered the Main Street network in 2007. Despite its small size (population 7,218), the community’s public and private support has resulted in nearly $26 million in public and private reinvestment downtown.

A museum and visitors center occupies the former Bastrop City Hall. In a public/private partnership, the building was renovated in 2013 through an investment of $1.6 million by the city and Bastrop County Historical Society (BCHS).

The BCHS operates both entities and is proud of its new exhibit “Settlement Life,” featuring an 1830 footboard from Bastrop’s first settler and an 1825 English Bible brought to Bastrop in the 1830s. It is now the seventh permanent exhibit in the museum gallery, which also features El Camino Real, the Baron de Bastrop, and the Civilian Conservation Corps.