Main Street Matters: Something is Brewing in Downtown Taylor

In late 2015, two budding entrepreneurs approached the City of Taylor and the Taylor Economic Development Corporation with an idea about a project that would lead to a very big turnaround in downtown Taylor. Ian Davis and J.D. Gin were both avid homebrewers who hatched a plan to create a brewpub in downtown Taylor.

Ultimately, if everything went just right, they would open a large-scale brewing facility. Well, it worked just like they drew it up, and they created a new business in Taylor called the Texas Beer Company. The idea was to take their homebrewing expertise and approach a willing community that would be interested in working with a startup brewery.

That is exactly what they found in Taylor. Like many communities, Taylor had an interest in creating a draw in their downtown area that would bring new people to town, create a place of socialization, and add life to the downtown after 5 p.m. The message that Davis and Gin brought to Taylor was if you help us launch our beer company in Taylor, we will use the brand to promote Taylor.

It wasn’t easy. The Texas Beer Company asked for a financial commitment from the city and the Taylor Economic Development Corporation to help get the project off the ground. As in many communities, providing financial assistance to a startup is challenging and sometimes controversial. 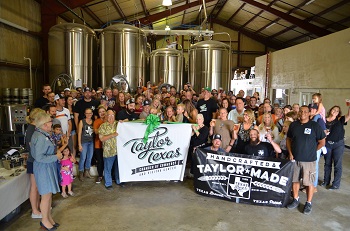 The community’s concern is that if a business that is assisted using public funds fails, the political ramifications would be painful. Startups are by their very nature hard to get up and running due to the amount of funding needed to get off the ground and then to operate until a profit is made.

Unfortunately, the odds are against startups. Many of the community leaders of the relevant boards, councils, and commissions that may be asked to assist have board members with extensive business, banking, and financial backgrounds. They know the risks of starting up a small business and are understandably cautious with the funds they are entrusted with.

With all that said, Davis and Gin, the founders of Texas Beer Company, brought passion, a vision, and strong salesmanship to Taylor, and ultimately received votes from city council and the Taylor Economic Development Corporation for each entity to make a sizeable investment in the project.

Texas Beer Company sought funding for two projects: first, a brewpub that would be located in a newly renovated, iconic building on Main and 2nd streets in downtown Taylor; second, a brewing facility that would produce and can beer for regional, state, and even national distribution.

The city was interested in funding a project that would bring life to downtown and create a place for people to come and enjoy themselves. The city committed to a $200,000 grant for equipment and buildout of the brewpub. With those funds Texas Beer Company committed to building a retail brewpub that would have beer on tap that was brewed by Texas Beer Company and other vendors.

The location is highly visible to traffic going through downtown Taylor, and it is easy to look into the space to see what you might be missing. Texas Beer Company installed what effectively has become its brewing lab with a small brewing facility for beer that is served on premise. The retail space and the small batch brewing facility were completed first and made operational by mid-2016.

The furnishings are rustic and fun, with picnic tables for relaxing and drinking a beer, and with string lights hung throughout the brewpub. It has a festive feel and has become the social center of downtown Taylor on most evenings, as it was dreamed to be. Live music is on tap most nights, with artists coming from the entire region.

It’s a family place with a space for children at the back of the room, away from the bar and music. Most of the music is in the background, which in my opinion, is the way to go in this type of setting. Bands that drown out talking can clear out a place unless it is billed as a concert venue. The small-batch brewing in the brewpub has allowed Davis and Gin to test new recipes at the brewery and perfect the best ones that will ultimately go into distribution.

As stated earlier, the impact of the brewpub on downtown Taylor was huge, essentially a tipping point. What once was not a lively scene after 5 p.m. has now become the place to be in Taylor most nights. 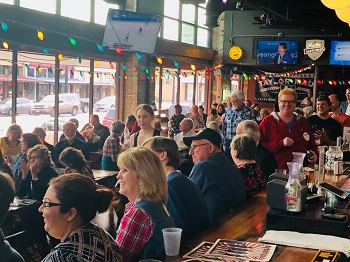 The second project was a beer manufacturing facility that was in part funded by the Taylor Economic Development Corporation, a Type A economic development corporation. Taylor Economic Development Corporation committed $200,000 to this project when all of the requirements of raising private funds were met. Type A is a sales tax fund voted on by the community to create new jobs and to increase investment in the community.

There are restrictions for use of the funds, so great care was taken to comply with the Type A law. The key to the Taylor Economic Development Corporation’s investment was that the manufacturing facility was located in a completely different location from the brewpub.

This key distinction allowed the Type A board to commit to an investment in the brewing facility. As with the city’s investment, Texas Beer Company had to raise private funds to purchase the equipment for the manufacturing facility and also be in full production in order for the Type A funds to be invested.

Texas Beer Company complied with the performance agreement that itemized these stipulations, and as soon as everything was verified the Taylor Economic Development Corporation cut a check to Texas Beer Company for $200,000. While it may have seemed harder on the small business to receive the funds on the “back end,” it was in everyone’s best interest to do so.

In essence, Texas Beer Company had to perform first and was rewarded in return. The business investors ultimately received the TEDC incentive, but that is because they privately invested $1.2 million initially, which got the project off the ground.