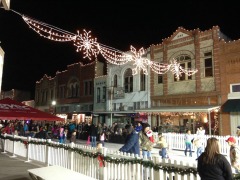 In our first year of being rededicated into the Texas Main Street Program, Cuero hit the ground running with new marketing and events to help bring people back downtown. We launched CueroMainStreet.com, which provides an overview of the program, while highlighting events and businesses located in the historic Main Street district. Since the site was unveiled, almost 2,000 people have visited. Cuero Main Street Program (CMSP) staff also created social media pages on both Facebook and Twitter, and held sweepstakes contests along with events to drive more traffic to the pages and increase followers and engagement.

As part of the program’s mission to bring families back downtown, we created two new events in our first year. KidFest, held in June, was a free event that drew more than 400 people to an afternoon and evening of fun, games, a magic show, a 5k fun run, and several contests including Pickles for Nickels, Heels For Wheels, Super Mom, and a historic scavenger hunt. The second event was all about bringing back a "Norman Rockwell Old-Fashioned Christmas" experience to downtown Cuero. Christmas In Downtown was held December 12–14 and included ice skating, carriage rides, a life-sized giant snow globe, and a carousel that kids of all ages enjoyed. Santa, Mrs. Claus, and the elves were in Santa’s Workshop, and their North Pole Dinner—a fundraiser in which an event venue was turned into a makeshift restaurant for three nights—served up delicious homemade dinners from local nonprofits. Among other activities was a treasure hunt in which more than 300 people participated in a three-day shopping scavenger hunt, going to 15 participating businesses to compete for a grand prize basket filled with gifts and goodies valued at more than $400. Finally, to set the beautiful backdrop for all the festivities, the CMSP held a Deck The Downtown window decorating contest in which businesses throughout the Main Street district decorated their window fronts and sidewalks in an effort to win a $500 façade grant. Christmas In Downtown was a huge success that drew both residents and visitors to the three-day event. 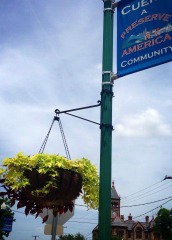 Also during the year, the CMSP teamed up with Full-O-Pep Ranch and Garden Center and the Cuero High School FFA floral design students to help beautify downtown. Cuero Main Street purchased 45 hanging baskets, which the students planted with flowers donated by Full-O-Pep. A variety of flowers were planted that will tolerate the South Texas heat, including varieties of sweet potato vine, Vinca (Periwinkle), and Gazania. The city’s Parks and Recreation Department built a water truck that will help them easily access and maintain the baskets daily. “Being involved in a project like this is what Ful-O-Pep has done since the business began,” said Kay Vigus, representative from Full-O-Pep Garden Center. “It’s important to do our part for the community.” The project was created as a way to spruce up the downtown, while also getting local youth involved in community pride, specifically for their historic downtown. The project is a great partnership that represents how everyone in the community works together so well.

As the second year kicks off, the CMSP will be tackling its decade-long bat infestation problem in the 100 block of East Main Street. We will be working with building owners and businesses to seal up any openings, and have contracted with a professional to build bat houses. The houses will be moved a few hundred feet each year until the bats have been relocated from downtown out to the city’s 185-acre park. (There is a related bat remediation article in this issue of Main Street Matters from the Texas Main Street Program design staff.)