Georgetown has many reasons to celebrate this season, not the least of which is 30 years of successful downtown revitalization efforts that have transformed this once-neglected downtown into a thriving, vibrant economic, social, and cultural center. Branding, marketing, and holiday programs that promise to “light up” downtown Georgetown are covered in this article. 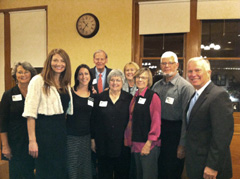 Georgetown proudly celebrated 30 years of downtown revitalization on Nov. 14. The newly-branded Most Beautiful Town Square in Texas branding effort touts the city of Georgetown’s and Georgetown Main Street’s many years of hard work toward the revitalization of the historic downtown. Along the way, Georgetown Main Street and historic downtown have been recognized many times with awards such as: 1997 Great American Main Street award; 2002 Best Downtown Marketing Program by the Texas Downtown Association (TDA); 2003 Renee Hanson, Main Street Hero recognized by the National Main Street Center; 2004 Preserve America designated city; 2006 Best Promotional Event (Red Poppy Festival) by TDA; 2006 Local artists created downtown mural “Discover Georgetown All Over Again”; 2007 Best Marketing Program (co-winner) by the Texas Downtown Association; 2009 First Lady’s Texas Treasures Award from the THC; and 2012 co-winner of the Best Promotional Event (Georgetown Swirl) from the TDA. In 2003, local resident, Renee Hanson, was recognized by the National Main Street Center as a national Main Street Hero. Many downtown businesses and local volunteers have contributed to all of these successes throughout the years.

Greatly contributing to the success of historic downtown is the restored historic Neoclassical Revival style Williamson County Courthouse, circa 1910. The beautiful courthouse was rededicated after restoration through the Texas Courthouse Preservation Program of the THC in December 2007. This restoration won the best restoration award in 2008 from the TDA. 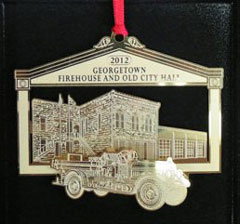 The historic firehouse, featured on the 2012 holiday ornament, is currently undergoing rehabilitation. The building was constructed in 1892 as the mayor’s office, city council chambers, city jail, fire department, and the Georgetown Water Co. In 1984 it became a Registered Texas Historic Landmark (RTHL). The two-story building will be converted into an arts center (with city offices on the second floor) that will provide art classes such as painting and drawing for the community, as well as a gallery space to display local art. The plans to change the storefront, while still repairing and retaining all the historic wood windows and pressed metal, were approved last month by Georgetown’s Historic and Architectural Review Commission. As an RTHL, the modifications also had to be also approved by the THC’s Divison of Architecture. The one-story building with four garage door bays was an addition built adjacent to the historic fire station in 1971. This portion of the building will be converted into a restaurant. Simultaneously, the sidewalk in front of the buildings in this block will be widened to allow greater capacity for outdoor seating. 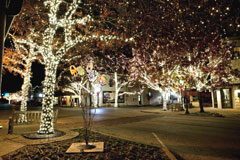 The “Light Up the Square” holiday lighting campaign was the brainchild of Main Street advisory board member (and original Georgetown Main Street manager) Linda McCalla last year when she suggested professionally lighting the 30-year-old red oak trees around the square during the holiday season. With a $15,000 matching grant from city council, the Main Street advisory board raised $15,000 in private/nonprofit sector funds in a month and a half to light 24 oak trees. The project was so successful and attracted positive comments from numerous locals and visitors that city council allocated $30,000 in the 2012 budget if the Main Street advisory board was up for the challenge of matching another $30,000 with private sector funds. It was, and now 34 oak trees around the square and one block off the square were turned on with the courthouse lights at the annual lighting of the square event on Friday, Nov. 23, in conjunction with Williamson County, to help officially launch the holiday season in Georgetown.

The city of Georgetown recently organized a downtown team made up of staff members from several city departments including Main Street, the Convention and Visitors Bureau, Public Communications, Economic Development, and the Public Library/Arts and Culture. This downtown team decided to pool advertising dollars and launch the first cooperative interdepartmental advertising campaign. The group agreed that a strong picture is worth a thousand words, so professional photos taken from last year’s lighting of the corner oak trees on the square would be the main focus of the Happy Holiday advertising campaign. First, a billboard was designed to go up on the well-traveled I-35 at Yager Lane to target the commuters to and from the North Austin, Round Rock, and Georgetown area. Secondly, Duratran signs in the Round Rock Premium Outlet’s food court area and on a directory sign were reserved to focus on shoppers from throughout the Central Texas region. Print ads were purchased in popular regional, statewide, and local publications such as Austin Monthly, Texas Monthly, and Texas Highways, as well as the local City Lights movie theater. Finally, a Shop Small Business Saturday cooperative ad was quickly filled up by downtown businesses for the back cover of local Focus on Georgetown magazine’s November issue. It helped raise more awareness of the shop local date, as well as a December cooperative ad due to the popularity.

Future projects are planned to further market the most beautiful town square logo including quarterly updates to the Round Rock Premium Outlet signs and new downtown light pole banners that show photos of actual downtown Georgetown property, business owners, and employees. With Grape Creek Vineyards, ThunderCloud Subs, the Georgetown Art Center, and a corner park opening by March 2013, it is hoped visitors will come to the “Most Beautiful Town Square in Texas” to sip, savor, shop, and swirl around the square at the award-winning Georgetown Swirl event on March 2. Cheers to the holidays!