During the last few years, the Kilgore Main Street program has learned to, and excelled at, finding unique ways to build the program and utilize existing resources. 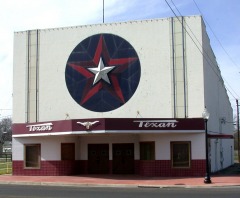 Downtown Kilgore is fortunate to have many icons that brand the district, which helps with our promotion. When asked what their favorite part of downtown is, visitors list at least one (if not all) of our icons: the oil derricks (“The World’s Richest Acre”), the Crim Theater and the Texan Theater, the shops, the historic architecture, the murals, and the improved streetscape.

Events are a favorite for locals and visitors—not only because they provide something to do, but also because they showcase our downtown. Many visitors have commented that there is “always something happening in Kilgore.” Kilgore Main Street tries to take it one step further and create special and distinct events partnered with a catchy phrase.

For example, the fright house fundraiser in the abandoned theaters was called “Crim Theaterror”—and the “Crim Reaper” greeted the guests. The new annual art event happened to take place on Van Gogh’s birthday, and because Kilgore is the official “City of Stars” and Van Gogh is famous for his painting “Starry Night,” it was called “KilGogh.” 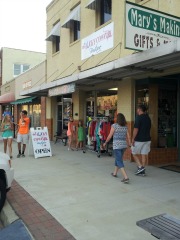 Another unique event in Kilgore is SAFFE DAY, which stands for Special Abilities Family Fun Event. This event is planned and hosted by the Kilgore Fire Department and supported by Main Street. SAFFE DAY has become one of our largest annual downtown events.

As the Kilgore Main Street program has started supporting all the different groups who host events downtown, it has gained an innumerable amount of resources. Combined with constant positive promotion of downtown and visual changes to the district (e.g., streetscape enhancements and façade improvements), Main Street has continued to receive new ideas, offers of help, and interest from businesses that want to be a part of our downtown.

The following is an example of the power of using resources. In May 2012, the Kilgore News Herald asked the city council for $3,000 to put electricity into the derelict Texan Theatre so they could host a candidate forum. The Texan Theatre and Crim Theatre are across the street from each other, and both have been in deplorable condition, having been unused for decades. The City Council granted the money and permission to use the Texan. This provided a wonderful opportunity for the Main Street program to celebrate Preservation Month by opening both theaters to the public and requesting their input on what they would like to see happen with the theaters. This event was a success, and interest in the theaters was piqued. 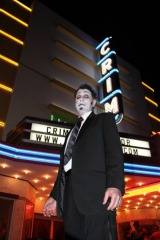 The Main Street program decided to create the “Crim Theaterror” fright house in late September 2012. Most of the supplies and decorations were donated—eight rooms were built and a 30-by-40-foot maze in the 10,000-square-foot building. Resources and help came from everywhere: the city allowed Main Street to use the building, trustees cleaned out all the items that had been stored in the building for years, the local trash service provided dumpsters, and local businesses supplied materials and sponsorships. The fire marshal devised a safety plan so the building could be occupied, fire extinguishers were donated, the fire department built the walls and maze, and citizens provided decorations. The newspaper advertised and built an Theaterror Fright House website, and students and citizens volunteered to work at the event. In just two weeks, the fright house was built and operational. The fright house was open nine nights, cost $10 per person, and raised $18,000. It took 974 volunteer hours in construction, 1,713 volunteer hours for operation, and 84 volunteer hours to clean-up after the event—a total of 2,471 volunteer hours valued at more than $61,000 in volunteer time.

Following the success of the fright house, the Main Street program decided to use the leftover construction materials to create a winter wonderland for the Christmas season and to continue to raise money to renovate the theater. “Carols in the Crim” was completely funded by sponsorships, took 278 hours to create, 316 hours to operate, and 38 hours to clean-up (732 total hours valued at more than $16,000 in volunteer time). This event brought the total to $20,000 raised for the Crim Theatre renovation.

Through these events, excitement began to rise in the community, and other groups began to ask if they could use the theaters for their events. The Texan Theatre was used to host a neon-light party for the Kilgore Youth Advisory Council to raise funds, and then again for a private party. Contractors and architects began to call asking for tours of the theaters and wondering when construction would begin.

As a result of the exposure through these events, the city was approached in February 2013 by two parties wishing to purchase the theaters and renovate both of them. The Main Street program had not put out a request for a proposal, or even advertised at all. In May 2013, exactly one year after the theaters were opened for events, the city signed a five-year lease-purchase agreement and construction has begun on both theaters. The Main Street program and the city continue to support the work on the theaters. Without the support of the community and utilizing every resource possible, it would not have been feasible to complete what was accomplished in one year.

Another example of utilizing resources is a location downtown (the former Maness Furniture building) that unexpectedly became a destination as a result of extreme fire and water damage. This now cleaned-up empty lot has become an opportunity. Today, it is one of the top places downtown for special photos—especially for business advertisements, prom pictures, and graduation photos. 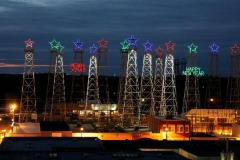 Finally, we strive to remember to bring it all back to the beginning. Like most Main Street organizations, there is a work plan. At the end of Kilgore Main Street’s work plan, there are four tables that set mini-goals: one each for Organization (i.e., what the Main Street Manager goals are), Promotion, Design, and Economic Restructuring. Every day, Main Street works toward those goals set by the board, and every day that work plan changes. Sometimes a goal is met and checked off, but sometimes it is important to note that a goal set at a retreat last January may no longer be relevant. Our work plan is constantly evolving and changing with our program—it’s not set in stone. Using the National Main Street Four Point ApproachTM is vital for Kilgore’s Main Street program. Combining that approach with local, state, and national resources enables Main Street to continually develop and grow downtown and move forward in a positive direction.