“The whole is greater than the sum of all of its parts.” —Aristotle

People working together are routinely able to do more work than if their individual efforts are added together. In 1995, many enthusiastic citizens contributed to writing the Main Street application, making more than 20 presentations to garner support for the program and gathering 170 letters of support. La Grange became an official Texas Main Street city in 1996, and since the early stages, it has been the work of the business owners, government officials, and citizens who have joined together. They formed public-private partnerships that enhance the downtown experience by organizing new and innovative events, preserving historic buildings, and growing the economy in unique and eclectic ways. By following the Texas Main Street Four-Point Approach™, the La Grange program has been able to develop its goals and formulate work plans to chart its success. 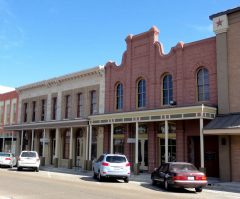 The enthusiasm still remains evident in La Grange today in more than 15 buildings restored and renovated, resulting with more than $14.3 million of investment on the square. During this time of investment in downtown, the Fayette County Courthouse was also restored under the Texas Historical Commission’s (THC) Texas Historic Courthouse Preservation Program. James Riely Gordon designed this 1891 Romanesque Revival courthouse. Rare among courthouses, this structure originally had an open atrium at its center with a large fountain, cast iron sculptures, and tropical plants. This area was enclosed for many years, but was reopened during the restoration. The restoration was completed in 2005. Main Street managers will tour this courthouse during the Texas Main Street training in June. The National Bank and Trust was also part of this significant reinvestment in downtown. They once considered demolishing their buildings, but after discussion with the Main Street Program and the National Park Service, they accomplished a beautiful restoration for which they won a Texas Downtown Association award in 2006 for Best Building Rehabilitation (for cities with fewer than 50,000 population). The bank has since outgrown these buildings and now leases them.

With their high ceilings, brick walls, and original hardwood floors, the two 1890s buildings that house the Texas Quilt Museum provide a fine showcase for both antique and contemporary quilt art. The museum officially opened in November 2011, and Texas Main Street managers will have a special tour of this gem in June.

The La Grange Main Street Program holds various community events and fundraisers throughout the year for an incentive grant program targeted at building and business owners to assist them with improvements. These events are committee driven and use the same principles as the inaugural committee. The program works to manage its growth by investing in promotional events that attract both outside visitors as well as members of the local community. The inaugural La Grange Uncorked, La Grange’s very own wine and food festival, occurred in March as a result of a partnership with the La Grange Area Chamber of Commerce to give a new spin on the Men Who Cook fundraiser. The event provided attendees with an opportunity to visit local merchants and taste numerous wines, as well as sample delicious cuisine prepared by local men who enjoy cooking. For its first year, the event had a sell-out crowd of more than 400 people, and everyone is looking forward to next year. 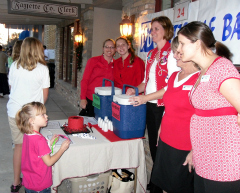 Another crowd-pleasing event is Schmeckenfest, La Grange’s wassail tasting and Christmas celebration. Entering into its 7th year, Schmeckenfest is a true community event, which attracts locals to the square to sample wassail (hot cider) that shop owners make and provide in their shops. Attendees support the community by shopping local and enjoying area musicians and dancers. Being named Schmeckenmeister is a coveted honor that the businesses vie for, since it is based on which wassail is voted the best by the participants. The event also includes live music, delicious treats sold by local nonprofit organizations, and a visit from Santa.

La Grange is also very proud of its longtime businesses. Nine of these will be honored on Friday, June 7 with Texas Treasures Business Awards from the THC. These awards will be presented by State Representative Lois Kolkhorst, Mayor Janet Moerbe, and THC Executive Director Mark Wolfe. This special public event will take place at 12:30 p.m. immediately following the Texas Main Street managers summer training at the Texas Czech Heritage and Cultural Center. All Main Street managers are welcome to stay for the event.

Through lots of hard work and determination, a vision and a plan for managed growth has guided the Main Street program in La Grange for the past 17 years. It will continue to do so well into the future.