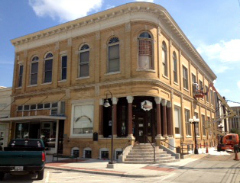 Longview was founded in the early 1870s, when the Southern Pacific Railroad extended its track from Marshall in Harrison County westward into Gregg County. The railroad laid out a new town a mile to the west on land purchased from Ossamus Hitch Methvin. Senior railroad management called the new settlement Longview, reportedly because of the impressive view from Methvin’s house on top of Rock Hill. 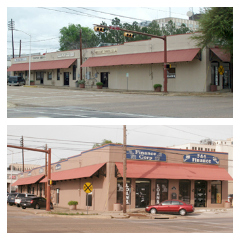 Since that time, Longview Main Street has developed, adopted, and implemented the Façade Improvement Grant Program (FIGP) through the City of Longview Community Development Block Grant funds. This program has funded a total of 12 façade grants, and $119,419 has been awarded for the completion of these projects. The first improvement project was for what used to be the Coca-Cola Bottling Company, which was built in 1919 to house a new distributorship for their up-and-coming product. This building helped establish a thriving city of commerce, and has been a part of the downtown Longview landscape for 90 years. It has also been in continuous service since built. Currently, the building is occupied by six existing businesses, all of which are service providers, with an estimated 19,000 current patrons. Project Design Assistant Sarah Blankenship and Architect Howard Langner from the Texas Main Street Program provided a design report and several renderings for this building. The total project cost was $21,204, of which the Façade Improvement Grant Program reimbursed the building owners $10,000.

The latest grant in 2012 was issued to improve one of downtown Longview’s true gems, the historic Everett Building, which has housed the Gregg County Historical Museum since 1984. Built in 1910 to house the Citizens National Bank, it is a Recorded Texas Historic Landmark that is listed in the National Register of Historic Places. Earlier grants helped restore the original façade of the building, but this $35,000 matching grant helped replace failing windows, brickwork, stabilization, and other maintenance issues. This work is vitally important to preserve the original structures in the historic downtown.

Longview Main Street partnered with the City Engineering Department to start on a multi-phased wayfinding project. Beginning in 2008, phase one was complete with phase two getting underway this year. The design team determined geographical locations that needed wayfinding signage. Phase one focused on downtown and north Longview, while phase two will focus on re-lettering downtown signage adding locations in West Longview. With the addition of new attractions and current destination points of interest, Main Street will add to current wayfinding signs in the downtown district.

A welcome addition to downtown will be the Longview World of Wonders (WOW), a children’s hands-on discovery center. WOW plans to open in January 2014, and with the help of a grant from the FIGP, they will be able to update the façade of the old Texas Furniture Building. The Main Street Board took a tour of the building as an educational session in March, and were able to view the upcoming plans. The board received information about what WOW plans to offer the Longview community. Not only will this bring an increased number of residents to downtown, but it will become a great asset for other businesses looking for more consumers. Included in the plans will be a mini farmers market to educate and expand the knowledge of young children about fruits and vegetables. A Lego Land will also be present within the building. The Texas Furniture building has more than 15,000 square feet of space for this amazing venture. The design team will work with this group on the façade.

Events come easy for Longview Main Street. Since the beginning of the program, there have been several new happenings created and held downtown. Downtown LIVE! started as a Brown Bag Lunch in 2005, with free music and vendors for downtown employees that wanted something fun to do during the lunch hour. This event has evolved into Downtown LIVE! at 5, where the program runs from 5–7 p.m. with vendors and drinks. The average number of attendees each Friday night ranges from 200–350, depending on the band and weather.

Movies on the Plaza, another new event started by Main Street, began on May 4, and the promotion team showed the movie “Brave.” In keeping with the movie’s Scottish theme, Main Street invited Longview Pipes and Drums to do a special presentation before the movie featuring bagpipes, drums, and kilts. The movie’s main character, Merida, also made a surprise appearance during the event. This downtown family entertainment included free admission, as well as free popcorn and drinks.

AlleyFest is a long-time successful event that the Longview Main Street team is in charge of. This year was the 35th anniversary of the festival, which took place May 10–12. Billed from the beginning as “an East Texas celebration of the arts,” the event returned to its roots featuring alley art, Kid’s Fest, Food Fest, and the Saturday morning Alley Run. Music Fest was proud to feature all Texas bands Friday and Saturday evenings.

Downtown Longview celebrates that it was and always will be a great place to live, work, and play.