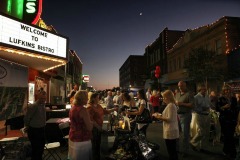 “When you’re alone and life is making you lonely, you can always go downtown,” sang Petula Clark in the 1960s.

Ahhh the '60s, the time of “peace, love, and brotherhood,” and the introduction of the shopping center to the American landscape.  Gradually, the retail standards of the day, J.C. Penney’s, Beall’s, Sears, and others joined the exodus, and “the music of the traffic in the city” faded into the background. Downtowns that were once the economic and social center of the community became the wallflower of the ever-changing city skylines.

In Lufkin, the music is once more alive and loud, and people are coming back downtown!

A Main Street city since 1983, Lufkin is the longest continuing Main Street city in Texas. Those years of façade grants, banners, street repairs, and beautification projects are showing benefits with a thriving downtown, new and unique shops, a renovated theater, restaurants, and a lively nightlife.

A state grant in early 2000 allowed the city to do major street renovations. Water lines were reworked and upgraded, streets were repaved, and accessible sidewalks were constructed with an inset of brick pavers. Historic street lights were installed, and Main Street Lufkin purchased trash cans, benches, and a street clock.

In November 2005, a celebration was held on our new city streets and the street clock was unveiled.

“When you’ve got worries, all the noise and the hurry
Seems to help, I know, downtown.”

Downtown Lufkin has become a great place for a little “retail therapy,” with boutiques and shops offering unique treasures for the home and office, plus clothing, jewelry, furniture, and antiques. Long-time downtown merchants, such as the lamp shop, candle store, jewelry stores, salon and spa, and health food store have been joined by artists, fitness centers, and clothing shops featuring everything from prom and wedding attire to children’s clothing and all sizes in between. 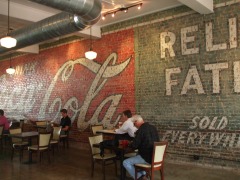 Just listen to the music of the traffic in the city
Linger on the sidewalk where the neon signs are pretty
How can you lose?
The lights are much brighter there
You can forget all your troubles, forget all your cares

Several buildings downtown have been restored and are now open for business. While renovating what would become Standpipe Coffee House, workers uncovered a Coca-Cola advertisement painted on the brick wall. The mural was left as found and makes an interesting backdrop for the little shop that, in addition to coffee and sodas, serves up some great local music on the weekend. 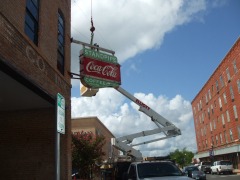 Also added on the street corner was an original neon sign that had been removed years earlier from another downtown location. The sign was reworked and now adds ambience and a little bit of history to the corner of First and Shepherd streets.

Don’t hang around and let your problems surround you.
There are movie shows downtown.
Maybe you know some little places to go to
Where they never close downtown.

In August 2007, the City of Lufkin purchased the historic Pines Theater. The theater first opened its doors in 1925, and credits rolled on the last movie sometime in the 1970s. The building eventually became a church, and then sat vacant for several years. When the city purchased the building, the roof was leaking, the distinctive marquee had been damaged by a truck, and the building was, in a word, a mess.

The city began by stabilizing the building and protecting it from further interior damage, then worked to restore the marquee. The final step was to renovate the interior. In December 2012, the first event was held in the renovated theater. Classic movies are now shown regularly, and a fine arts series is also a big draw. The theater is available for rental and has even been the location of a wedding.

Main Street events, the Downtown Hoedown (a street festival), Entertainment in the Park in October, Downtown Trick or Treating on Halloween, and the Christmas Parade continue to draw more and more people downtown. But those are just once-a-year events. The big draw has become downtown itself, with its specialty shops, restaurants, and rental venues used for weddings, parties, and receptions. 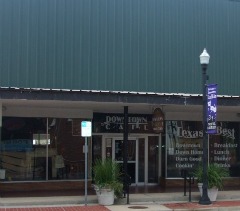 Merchants have banded together to host special events and late-night shopping days that continue to draw people to our downtown. The Lufkin Convention and Visitors Bureau hosts the Bistro in October and Corks and Forks in February. During Bistro, several downtown businesses stay open to showcase their wares. Each event is an opportunity to bring new customers downtown.

So go downtown
Things will be great when you’re downtown.
No finer place for sure, downtown
Everything’s waiting for you…