In 1989, Mineola became a designated Texas Main Street City. The National Trust for Historic Preservation's National Main Street Center established an award in 1999 for cities earning the honor of “Nationally Accredited Main Street City.” By meeting certain criteria, Mineola has earned this honor 12 of 15 years since the program began. Since its designation, Mineola Main Street has developed a strong, focused historic downtown district, with more than $13 million dollars of investment in the central business district made by private and public funds. The Main Street Advisory Board’s mission has been to use historic preservation as a method of restoring a positive image to downtown, while creating economic growth for the community. A noteworthy accomplishment in 2013 was the listing of the Mineola Downtown Historic District in the National Register of Historic Places.

Main Street is the heart and soul of the community, and with the city, merchants, and the community’s strong commitment to revitalizing the historic homes and downtown area, Mineola continues to establish itself as a tourist destination. The Main Street Board, under the supervision of the city, continues to make successful strides in historic preservation, economic vitality in downtown, and a concentrated marketing program that will foster continued growth in the community. The Mineola Main Street Program is an outstanding example of what can be accomplished when the city, community, and numerous volunteers work together to create and carry out a common vision.

Mineola was established in 1873 with the arrival of the Texas and Pacific Railway and the International and Great Northern Railroad. Its townsite layout and development was strongly influenced by the railroad tracks. By the 1880s, the regional economy was based largely on agriculture, particularly cotton as a cash crop for area farmers. In 1994, Mineola was the first community in Texas to receive funding for a downtown sidewalk project from a Texas Department of Transportation enhancement grant. In 1996, Amtrak Texas Eagle declared Mineola a designated station stop, and the Gazebo Pavilion project was completed in 1997. From the beginning, the Mineola Main Street Board and its volunteers were devoted to revitalizing the district. In 2009, the Main Street Board re-evaluated its incentive grants, giving historic property owners a $1,000 matching grant. This year, they have added grant money for property owners who will take their buildings back to the original facade.

As mentioned previously, one of the Mineola Main Street goals was to be listed in the National Register of Historic Places, which was accomplished on April 16, 2013. The potential for a historic district was first identified in the 1998 historic resources survey, and confirmed in a survey conducted in 2009. Mineola applied for and received a $20,000 grant from the Meredith Foundation to cover the cost of the National Register district application. The boundaries for the Mineola Downtown Historic District include blocks that reflect the retail core of Mineola, as well as post-World War II development. Most of the buildings within the district date between 1885 and 1960, with the majority dating from 1900 to 1930.

The primary building material within the district is brick, regardless of architectural style. The majority of the properties are one- and two-story commercial buildings of brick construction—other significant features include service stations, civic and institutional buildings, historic markers and signs, transportation properties including a railroad depot, and brick streets. The district is composed of 88 properties (83 buildings, one structure, and four objects), of which 58 are contributing and 30 are noncontributing.

Listing in the National Register affords properties a measure of protection from the possible impact of federally funded projects, as well as access to technical expertise and grant funds to facilitate restoration and preservation. Income-producing properties are also eligible for federal tax benefits for sympathetic rehabilitation work. This designation has indeed been a proud accomplishment for historic downtown Mineola.

Downtown is vibrant with full storefronts, ongoing building rehabilitations, and Music on the Streets musicians who volunteer their time and talent every Saturday. History is always at the forefront with the Mineola Historical Museum located in the historic post office in the heart of downtown. In September 2012, the Beckham Hotel was purchased and is being restored to its original grandeur. The empty space on South Johnson Street where the roof collapsed is now filled by a two-story building, with retail downstairs and apartment upstairs. The owners purchased brick from the old bank building that was demolished in Palestine. The local jewelers purchased a building on West Broad Street and renovated the space. The downtown historic district has only one unoccupied space at street level.

Plans have been presented to the Landmark Commission (established in 1995) for loft apartments upstairs over the Poppers Gourmet Popcorn Store. Helping to fund some of these projects is the Mineola Main Street Amtrak Wine Fest, the major fundraiser for downtown projects and incentive grants. The very successful event celebrated its 10th anniversary this year. This unique fundraiser includes a railroad trip from Mineola to Fort Worth and back on Amtrak’s Texas Eagle, featuring food and tastings of Texas wines. 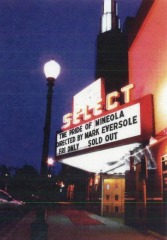 The Select Theater, in the heart of downtown, is one of the oldest continuously operating movie theaters in the state. This year, the Mineola Historical Museum, Main Street, Mineola Tourism, and the Meredith Foundation partnered to create and show “The Pride of Mineola,” a documentary film sharing the 93-year history of the theater. The film told the story of the theater through the eyes of 40 patrons. Local preservationists Barbara Musgraves and Sharon Chamblee were integral in preserving the historic theater and funding the film’s director.

Very nice article! Only missed what part of the state it's in. I'm already thinking "road trip".

Carol, thanks for asking and glad to hear you're interesting in checking out Mineola. It's in the Texas Forest Trail Region, about 80 miles east of Dallas.

We love being apart of The Mineola Downtown Historic District. Between Friends Shop. #BetweenFriendstx