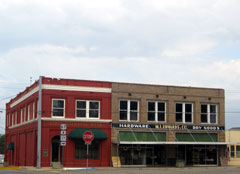 Repurposing buildings has been the key to preservation in Mount Vernon. Located one mile north of I-30, the city’s Main Street Alliance members feel that downtown revitalization is key to maintaining a vibrant economy. After 20 years as a Main Street City, Mount Vernon has been recognized for the 10th time as a state-commended and Nationally Accredited program.

“Preservation is not something that happens overnight,” emphasizes Carolyn Teague, Mount Vernon Main Street Executive Director. “It is a long-term commitment to preserving our sense of place.”

Earlier years of neglect and demolition of downtown buildings underscored the need to save remaining structures. Together with the support of local banks, the city’s Economic Development Corporation, the Franklin County Historical Commission, and building owners, Mount Vernon’s Main Street helped to outline a plan of work. 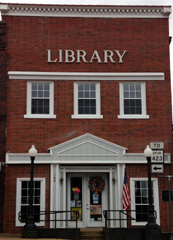 Through use of Community Development Grants and matching county funds, the old First National Bank building became the first repurposed downtown structure. It has since undergone two major renovations to make it both functional as the Franklin County Library and maintain its unique architectural aspects, such as its original marble counter, original lighting fixtures, and ornate ceiling. The vault was repurposed as a children’s reading room. An elevator was added, allowing the second story (a former dentist’s office) to be claimed as a meeting room, and more shelving was added for books. 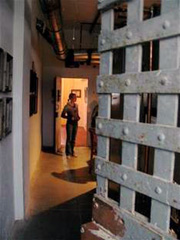 The construction of a new county jail and law enforcement center in 1991 left the historic 1912 jail building vacant. It was quickly repurposed to house offices for the Franklin County Extension Office on the north side of its ground floor, and a museum/art gallery on the south side of the ground floor and the second floor. A section of the original iron-cage cells for prisoners was set up with life-size soft sculptures to replicate jail life in earlier years. The remainder of the upper floor is used to display the varied permanent collection of art owned by the Franklin County Arts Alliance. The wine and cheese receptions, which are held at each new exhibit opening, are much-anticipated events.

Volunteer labor, a small amount of tax dollars, and funds from the Charles Bruce Estate endowment were leveraged to begin an early renovation of the district courtroom in the Franklin County Courthouse, a cornerstone of the downtown business district. The second floor courtroom of the 1912 three-story Classical Revival-style building, designed by architect L.L. Thurmon of Dallas, was returned to some of its original glory.

The Main Street program inspired the start of restoration, including the removal of 1960s-era suspended/dropped ceilings, layers of paint on stained window sashes, and ornamental woodwork and replacement of some of the damaged or missing tin ceiling panels. 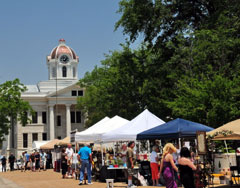 The Franklin County Historical Association stepped in to spotlight the value of the building, with uses for the public other than county government such as community theater and concert music performances. The county submitted applications to the Texas Historical Commission to participate in the Texas Historic Courthouse Preservation Program. In 2006, the building was listed in the National Register of Historic Places. Franklin County was the recipient of a $250,000 planning grant in 1998, a $2 million exterior grant in 2010, and is currently implementing interior work funded through a $3 million grant awarded in 2012. Renovations are slated for completion in late 2013.

Similar projects were taken on by downtown building owners over a two-decade period. These projects were first made possible through low-interest façade and building infrastructure loans by local banks (rates were a quarter of the cost of similar loans in other areas of the city). Over the past decade, rental assistance, small façade grants, and the matching fund Existing Business Structure Assistance Program (EBSAP) through the city’s Main Street and Economic Development Corporation assisted more than 40 businesses with their buildings. In 2012–13, the EBSAP assisted with more than $350,000 in re-investments to improve existing buildings and the start-up of four new retail business sites.

As American singer, songwriter, guitarist, and poet Ani DiFranco said, “In order to keep anything cultural, logical, or ideological, you have to reinvent the reality of it.”

Many other buildings have been repurposed. Museums now operate from the 1940 WPA-financed fire station/city hall, 1894 Cotton Belt Depot, circa 1883 Parchman House Farmstead Living History Center, and the two-story home of Henry Clay Thruston (the tallest soldier in the Civil War at 7 foot, 7 1/2 inches). The house was built on the Bankhead Highway, the 1919 transcontinental route from Washington, D.C. to San Diego. An auto parts store is now an art and framing gallery, and an auto repair garage now houses the Cultural Arts Center with a beautiful outdoor courtyard. A grocery store is now a gym, boxing, Taekwondo, and Yoga center. The mid-century post office currently houses the expanded city hall. An abandoned 1907 church building now serves as the venue for Mount Vernon Music, a regional and nationally recognized organization that provides and develops high-quality live music performances in northeast Texas.

A current construction project will repurpose the former Chevrolet dealership’s Art Deco building into a meeting and party venue. Most recently, a wall collapse at a building received emergency response from the National Trust for Historic Preservation, with a grant to fund engineering to develop a plan to stabilize the site and assure adjacent building structures are not endangered.

The Main Street Alliance has not forgotten about existing retail businesses. The economic restructuring and promotions committees have helped to develop or expand events in the heart of the city. Among these are the Piney Woods Wine Trail Festival (third Saturday in May), the Wine in the Pines event (fourth Saturday and Friday prior in October), Cypress SpringFest with Tour de Cypress bike ride and run (third Friday and Saturday in April), and our 39-year-old CountryFest (second Saturday in October).

With these events and other retail promotions, such as cash mobs and Pot O’Gold, the Main Street Alliance has helped to bring more shoppers to local retail businesses. Simple tie-in promotions improved door traffic for merchants. For instance, a coupon for a special wine tote, which was given to those registered to enter the wine-tasting areas at the wine events, was redeemable only inside local retail shops in the downtown area.

Situated on the Bankhead Highway, once called “the Broadway of America,” Mount Vernon experienced growth with the advent of new transportation changes of the 20th Century. The city is once again poised for continued growth in the 21st Century.

Hi. I noticed your name while looking up Mt Vernon.
My father was Guy Teague. His large family which included brothers Jack and Roy, sister Bertha grew up in Mt. Vernon. I think we muzt be related!
Best Wishes, Susan