A growing community located 22 miles east of downtown Dallas on the eastern shore of Lake Ray Hubbard, Rockwall has been a designated Texas Main Street city since 2009.

The revitalization of downtown Rockwall has truly come about through the efforts of many people working together for a common goal. Its rebirth began when the Rockwall City Council applied for and was chosen as an official 2009 Texas Main Street city.

Rockwall’s Main Street program has partnered with the Rockwall Old Town Shoppes and the Friends of Downtown, to attract great restaurants, retail shopping, and thousands of visitors annually. Downtown Rockwall is now a destination for social and entertainment activities for both Rockwall residents and tourists from the entire North Texas area. 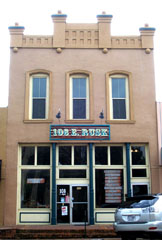 Since 2009, the Main Street Advisory Board has awarded 18 façade and sign grants totaling $16,000, which has allowed merchants to improve the exterior of their buildings. The façade grant program is funded by the city, as well as a contribution from Community Bank. Building facelifts in the district are impactful and have spurred others to make improvements to their properties. Public and private reinvestment in downtown totals $2.5 million since the inception of the program.  Later this year, a voter-approved bond project for downtown improvements will begin, adding $8.625 million to the reinvestment total when completed.

The enhancements will include street and sidewalk reconstruction, more parking and pedestrian areas, street landscaping, lighting, signage, and furnishings.

The passage of the bond project speaks to the enthusiasm citizens have toward this thriving downtown. It confirms a desire by the members of the Rockwall community to preserve the heart of Rockwall.

Property values in the downtown district increased by 34 percent in the last 10 years, and sales tax collections increased by 30 percent since 2009. Five additional restaurants have opened downtown since the Rockwall Main Street Program began. 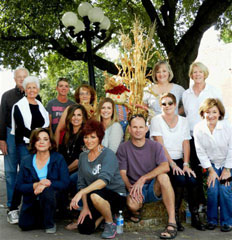 Volunteerism has increased dramatically since the creation of the Main Street program in downtown. A network of 40–50 volunteers has been established, and more than 2,500 volunteer hours have been tracked since 2009. The city holds an annual volunteer reception in September in downtown featuring live music, cocktails, and heavy hors d’oeuvres—the invitation list includes more Main Street volunteers every year. Youth involvement in Main Street has been great with Boy Scout troops volunteering to carry watermelons for customers at the downtown farmers market, as well as providing cold water on hot summer days. The Rockwall Youth Advisory Council has reached out to Main Street to help build an additional volunteer recruitment program through its Facebook page.

Today, something exciting is happening downtown 26 weekends of the year, including the Farmers Market (a collaborative effort of the Friends of Downtown Rockwall and Rockwall Main Street); Founders Day; Just for Kids day; Rib, Rub and Run; Scare on the Square; and the Old Town Christmas Market.

For more information, call Bethany Golden at 972.772.6400, or visit mainstreet.rockwall.com.