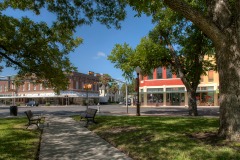 Once upon a time, long, long ago, a transplant to Texas got hired as Seguin’s new Main Street Program Manager. She had some relevant experience having helped publish a small-town newspaper, marketing nonprofit organizations, and participating in oral history projects through state preservation organizations. She arrived at her new job with great enthusiasm and received the following “warm” welcome from one of the town’s matriarchs:

“It’s bad enough you aren’t from here, but do you mean out of the whole state of Texas they couldn’t find someone to do your job? You will never know enough. They might as well take your salary and divide it up with the downtown businesses.”

Other well-meaning citizens were equally kind, telling about all the previous failed attempts at revitalizing downtown. At one meeting, the new manager was introduced as a “Yankee” which prompted the manager to ask: “Can you be a “Yankee” if your ancestors weren’t in this country prior to the Civil War?” The response was “Yes. You are a Foreign Yankee.” 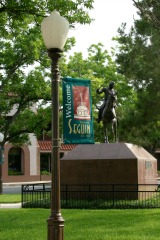 The “Foreign Yankee” manager realized that in order to survive in this new position, the first task at hand was to listen. (And listen, and listen, and listen.) Listening provided an understanding of how proud the community was of its history, about what the town wanted and valued, and about unresolved issues that had caused citizens to become frustrated.

At the Texas Main Street Program’s new-manager training, a nifty idea was shared about creating meeting invitations or postcards using historic photos. Taking to heart the “don’t re-invent the wheel” mantra of the Texas Main Street Program, the idea was snatched up by the “Foreign Yankee” manager, and it became the “admit one outsider” ticket that built trust and opened the door to support from town matriarchs and patriarchs. They loved seeing their old photos resurrected for a new use.

Listening helped build trust and got revitalization efforts up and running. Soon people were coming out of the woodwork and stopping by the manager’s office with lists of things they wanted for their town, which were often accompanied by a laundry list of complaints.

So the second thing the manager realized was the need to “fix” things. In Texas, most of the Main Street programs are part of local government, and the managers are full-time employees paid by municipalities. This is different from many other states, but it works very well for us. Main Street managers don’t have to concentrate on fundraising and can focus on “fixing” things. As city employees, they also work for the organizations that hold the keys to getting things fixed: local governments. Being a bureaucratic insider can be a real plus to getting things done.

One of the first requests to “fix” something in Seguin was to restore water to the rose garden along a historic walkway. The walkway was owned by the city. The water came from the county. The roses were planted by a dedicated group of vintage-era gardeners. After some kind of dispute, the water supply had been cut off, the roses croaked, and the ladies cried. With a flick of the pen and a few phone calls, this was fixed and a new group of supporters was on board for the downtown revitalization efforts. Years later, when the club dissolved, it donated the balance of its funds to the Main Street program. Being a “fixer” can make you a friend for life. 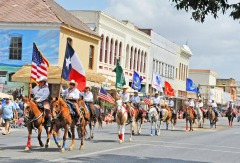 Listening, celebrating the past, and fixing little problems was what laid the foundation for early revitalization success. Working with a meager budget, the new Main Street board set realistic short-term goals based on the Main Street Four-point Approach™: clean up an area (Design), hold a new event to bring people downtown (Promotions), help existing retailers create interesting window displays (Economic Restructuring), and partner with other groups to get more bang for the buck (Organization).

Each activity or small success added up to more support from the community, and the Main Street program took every opportunity to toot its own horn. The local print media agreed to run a weekly column on downtown. Even though it can be tedious, utilizing that free venue with stories and pictures of events, new businesses, projects planned or underway, and the people who live and work downtown has been important. It’s a big part of getting the word out, engaging the community, and building ongoing community support for downtown revitalization.

It’s hard to imagine tackling a job like a Main Street manager without the training and assistance of the Texas Main Street Program through professional development and networking. Rarely do you have to reinvent the wheel. Need to know the best source for park benches or lights for the holidays? Use the listserv. Want advice on how to handle a tricky board member? Call a colleague in another city. Want to create a design review ordinance for your downtown? Borrow a template from another city to get you started. Want to convince a property owner to put some money into their façade? Get a conceptual drawing from the Texas Main Street design staff and watch their eyes light up. 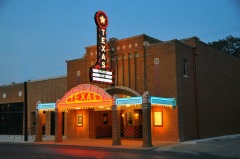 Once upon a time, long, long ago, people here didn’t think they could once again have a downtown they would be proud of. Skeptics thought the Main Street Program was one more futile attempt doomed from day one. But, by using the Four-point Approach™, great things have happened and support for downtown revitalization continues. Successes over the years include: 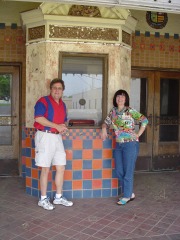 Upcoming projects scheduled to get underway soon include the restoration of a historic four-story hotel and the construction of a $14 million new library on the edge of downtown. Over the years, Main Street programs and their managers mature. But no matter where towns are in the revitalization process, the Four-Point Approach™ is pretty much foolproof. It even works for Foreign Yankees!

Seguin is very pleased to be hosting Texas Main Street Program professional development January 28–31, 2014, where the successes that have accumulated over the years will be showcased and a good time shall be had by all!