One of the first things both the national and statewide coordinating programs recommend to communities applying for Main Street designation is that they generate broad-based local interest and support for the Main Street effort. To be successful, a balance of public and private participants is needed right from the start, including business/property owners, local government, residents, civic associations, schools and other institutions, banks, utilities, media, and individuals representing a broad and varied cross-section of the community. Over time, maintaining and growing a local program depends on the continuation of that support. It is one of the most basic—yet no doubt one of the hardest—things that staff and other stakeholders have to do. Instead of focusing on a specific Main Street community, this month’s Spotlight article showcases several interesting and noteworthy examples of effective volunteer-based activities.

One component of the Beaumont Main Street Program (BMSP) is a group of young professionals called Young Creatives for Downtown Revitalization (YCFDR). This volunteer group believes that successful growth of the downtown area is connected to developing downtown residential space. As of January 2014, approximately 150 people lived in downtown Beaumont, but the group and the BMSP feel that we need more downtown residents, especially in market-rate rentable loft space. Several buildings in downtown Beaumont are perfectly suited for loft living. Plus, the Main Street district is a National Register Commercial Historic District (this is the 1978 National Register listing; the district boundary was increased in 2008).

During 2013, YCFDR organized and hosted a survey focusing on the need for residential development, and it was distributed through Survey Monkey, social media, and email marketing. As a follow-up to the initial survey, to encourage additional survey responses, and to keep awareness high, YCFDR hosted loft tours with the theme, “Livin’ It Up Downtown.” As of late fall 2013, more than 400 people had indicated their perceptions and desires pertaining to downtown living in Beaumont. 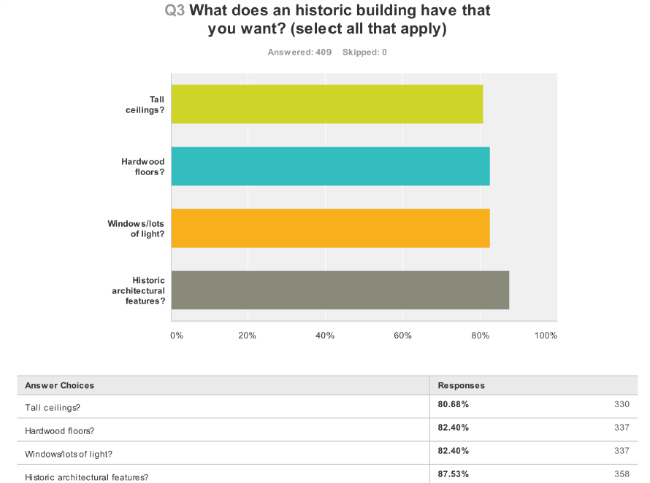 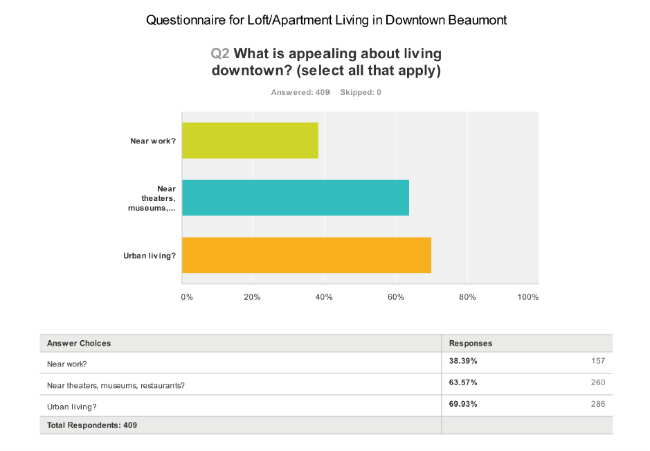 More than 91 percent of the respondents answered positively to the statement “I am interested in living in a historic building.” When asked about tall ceilings, wood floors, light, or architectural features, more than 80 percent in each category stated that these attracted them to historic buildings as residential space (Chart A). Almost 70 percent loved the idea of urban living, while 63 percent were attracted to being near the culture and life of the city (Chart B). Other questions asked in the survey were whether true loft space (few walls) was desirable; what rents would be acceptable to the market; desired number of bedrooms and unit sizes; and amenities needed. Demographic questions, to determine how marketing might proceed, included questions of gender (56 percent female), and marital status (67 percent single), age (62 percent under age 34), income, and occupation. The survey and activity generated by YCFDR helped the BMSP compile a list of 160 people who have specifically expressed interest in living in downtown Beaumont and will help direct future program activities during 2014 and beyond. 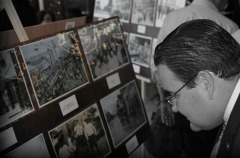 In 2010, Eagle Pass “Back in the Day” started out as a Facebook page made by local history buff Jeff Taylor, Sr., who wanted to create awareness of our town’s history. I enjoyed seeing all the vintage pictures Jeff posted of Eagle Pass. In 2012, I contacted him to talk about an idea I had to bring his Facebook page to life by creating an event to promote our town’s history and heritage. In May 2013, we had our first “Eagle Pass, Texas—Back in the Day” event. Angelica Hesles and her family helped us by hosting the event at her well-known downtown store, Hesles Sporting Goods. Mrs. Hesles’ son Richard and his wife Vanessa provided refreshments from their downtown restaurant Mia’s. For the event, we had a variety of vintage pictures of our downtown that we picked from the “Back in the Day” Facebook page. The event was scheduled to run from May 13–18, but it became so popular that we left the photos up for an extra week.

After this event, Jeff and his wife Joyce became volunteers for the Eagle Pass Main Street Program (EPMS) and have since participated in many ventures downtown. Last fall, Jeff and I wanted to have a “Back in the Day” event to highlight our local war veterans. Joaquin Davila, the owner of the Old Downtown Drug Store, offered his building to us. Jeff, Doris Miller, our board chairperson, and a few local veterans helped with the cleanup and set up of the building. On November 20, 2013, we had our second “Eagle Pass, Texas—Back in the Day” event titled “Veterans of Maverick County.” We had many photos of our local World War I, World War II, Korea, and Vietnam veterans. We borrowed many items from our veterans and their families. Hesles Sporting Goods and Maverick Sporting Goods helped us with some items since they sell army and military gear.

This January, Jeff Taylor, Sr. was nominated for the Citizen of the Year Award for his dedication to EPMS and his historic preservation efforts. Although he did not win the award, it is still an honor to be named for such an award.

We’ve had much success with this event thanks to all the individuals who volunteered their time to put it together. We are currently planning a third Eagle Pass, Texas "Back in the Day” event to be held at the Fort Duncan Museum at the old Fort Duncan campus. 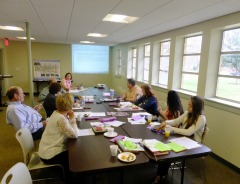 Elgin works with Elgin High School to secure young volunteers for the Elgin Main Street Program (EMSP). A marketing  class at Elgin High School and a group called the REAL club both seek hands-on, relevant projects that can transfer to work experience. In 2013, the REAL club coordinated the Road Hog Car Show that is part of the annual Hogeye Festival. Proceeds from the show were shared between the club and EMSP. The students and their advisor, high school teacher Bob Haisler, handled all of the logistical, marketing, planning, and day-of efforts related to the show. It was a great success and had almost 100 cars!

The marketing classes can work on specific projects like budgeting printing for a project, or designing flyers. A new project in fall 2013 had groups of students create a short, graphic-based story of the history of downtown buildings that could be viewed online via a QR Code. Bob brought the students downtown for a field trip, and I provided an overview of the EMSP, and the heritage walking tour. Thanks to a generous downtown property owner, Ed Rivers, the students also toured two buildings under renovation. Seeing the restoration in action really kept their attention.

Two students from the REAL club attended the EMSP retreat in February. Students attend city council meetings, and this month, they'll be part of the planning process for our Union Pacific property, which is slated to become a plaza community destination for downtown Elgin. In addition, Elgin has a new campus for Austin Community College (ACC), and one ACC student volunteers in our office around her class schedule. She started with the program in high school. The department worked with Bob to match a part- time intern for spring break and hopes to have a summer intern to help with Main Street and park programs. 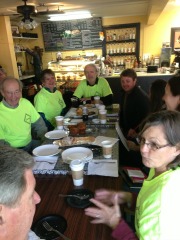 The Crew was created as a volunteer organization based in Denison designed to help out our local businesses. It began from a conversation with a volunteer interested in seeing downtown Denison thrive. (He has since passed away, but the Crew lives on). The timing was perfect as we were seeing an influx of new businesses.

Wearing bright matching shirts, the Crew (nearly 20 strong) walks the streets and alleys of downtown daily to pick up trash and look for items that need to be addressed or repaired. They are an ambassadors group that has been well received. The group members don’t want credit; they just want to see a good business climate in downtown Denison. They were a large part of the reason we won the Texas Downtown Association Marketing award for the Operation Increase Occupancy program. The Crew was also the winner of the 2013 Volunteer of the Year award in Denison. [Editors note: Donna Dow will be presenting a session on the Operation Increase Occupancy program at the National Main Street Conference in Detroit, Mich. in May.]

For some time, I had been looking for a way to nurture new businesses. We tried hosting a Chat Over Coffee event and monthly socials, as well as inviting them to our committee meetings and other things, but nothing seemed to work well. While it wasn’t part of the original mission of the Crew, they turned out to be good at it. As the Crew members performed their daily walks, they came in contact with new business owners. Normally, they would meet the new business owners as they were moving in, and offer conversation, encouragement, and a helping hand. This turned out to be the nurturing boost for new businesses that had been hoped for through other means.

The Vernon Main Street Program (VMSP) strives to partner with our local Wilbarger County Historical Commission (WCHC) on any project that involves historic preservation. For instance, VMSP requested and received $1,000 in funding from WCHC to help fund our Downtown Façade Improvement Matching Grant Program. Also, VMSP and WCHC are co-sponsors of our annual architectural appreciation essay and drawing contests. These contests educate both the contestants and the general public about the importance of preserving our local architectural heritage. The contests offer cash prizes and ribbons to winners, and they are timed so that winners are selected in April and honored in May (Preservation Month). The chairman of the WCHC is an alternate member of our board; as such, he attends our meetings regarding façade improvement grant proposals and advocates for such projects when they involve historic restoration of downtown buildings.