Making Your Own Mole at Casa Navarro 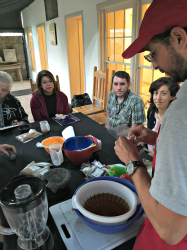 In 2017, Casa Navarro State Historic Site hosted a series of Make Your Own Mole workshops that built off previous historic foodways programs. Mole is a rich sauce in Mexican cuisine that is traditionally prepared during the holidays. The 2014 Mole Navarro workshop featured a mole cooking demonstration and a presentation on the history of mole in historic cookbooks by Juli McLoone of the University of Texas at San Antonio Libraries.

In 2015, site staff chose to go with a more practical approach to understanding the history behind mole through the ingredients, process, and tools used to make the sauce. Recipes for the mole workshops were sourced from La Cocina en el Bolsillo, a series of pocket-sized Mexican cookbooks published in Mexico City around the turn of the 20th century and distributed in cities across the U.S.

In San Antonio, the cookbook series was sold by Pablo Cruz, publisher of the Spanish-language newspaper El Regidor. At one time, Cruz’s printing press and bookstore were located on the same block of Laredo Street as Casa Navarro, part of the historic Laredito neighborhood that was home to many businesses and shops for San Antonio’s Mexican American community. 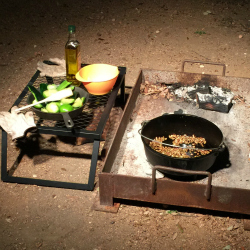 Mole is recognized as a traditional dish of Mexico due to its distinct flavor. Traditionally, the sauce is made from a mix of peppers, spices, herbs, and fruit. All these ingredients are fried, toasted, soaked, or roasted to varying degrees then pulverized and simmered into a sauce that can take on a variety of consistencies and colors depending on the ingredients.

Mole poblano for instance is heavy in ancho (dried poblano) and pasilla (dried chilaca) peppers, giving the sauce a red color and spicy taste. Mole verde has a citrusy and less spicy taste since it is made from poblano peppers, jalapenos, and tomatillos that give the sauce a green color. During Mole Navarro in 2014, we focused on modernizing a mole poblano recipe found in the first volume of the cookbook series. The result was a mole that contained more than 15 ingredients, and took about 1.5 hours to prepare. For our mole making workshops in 2015, we hoped to modernize a historic mole recipe that could be prepared with fewer ingredients and less time.

Mole verde, found in La Cocina en el Bolsillo No.2, was a clear choice since the ingredient list was minimal and the preparation time seemed short enough to undertake as part of a cooking workshop. Likewise, all ingredients for the recipe were readily available at the local grocery store. 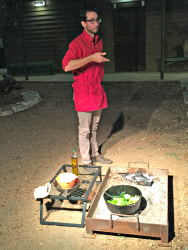 We cut open and collected the seeds of a mix of five poblano and jalapeno peppers, then cut them into strips, setting them aside for later. We cut five tomatillos into quarters and weighed out two ounces of pumpkin seeds, also known as pepitas, and added cumin seeds. Once our ingredients were portioned, we fried the mix of peppers and tomatillos in a cast iron pot with olive oil.

Afterward, the pepitas and cumin were fried in the same pot until lightly browned and aromatic. We set the seed mix aside to cool before placing it in a spice grinder to be ground coarsely, which later added great texture to our mole. The tomatillos and peppers were placed into a blender with two ounces of chicken broth and blended together until smooth.

We placed the tomatillo-pepper mix and the pepita-cumin seed mix back into the cast iron pot and let it simmer over low heat for approximately 10 minutes. This allowed time for the flavors to mix, producing a light green mole with a smoky, spicy, and tart taste. In all, the preparation took about 30–40 minutes and the cooking about 15 minutes for a total of about one hour spent preparing the mole.

Historic Recipe for Mole Verde (in Spanish and English) 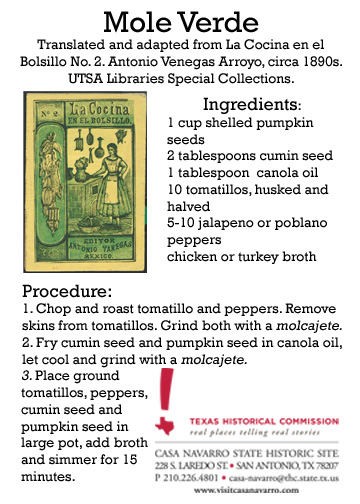 GREEN MOLE: Peel and roast pumpkin seeds, and grind them together with the skins. Afterward, grind raw tomatoes, soaked green chili peppers and a few cumin seeds, portioning the ingredients so the mix is barely spicy. Fry everything in lard, and add cooked turkey, which also could be cooked chicken and pork jowl.