Man on a Mission 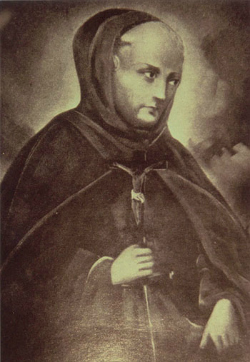 Stephen F. Austin will be forever remembered in history as the “Father of Texas” for his role in founding the Republic of Texas. Over 100 years before Austin ushered Anglo immigrants into Texas, however, a “father” in a different sense of the word led another group of settlers into the area—Father Antonio Margil de Jesús.

To halt the encroachment of French traders from Louisiana into East Texas in the early 1700s, the Spanish government charged Domingo Ramón with leading an expedition into the region to reestablish a Spanish presence. Among the members of Ramón’s expedition were 12 Franciscan monks, including Father Margil. The monks were tasked with setting up Catholic missions throughout East Texas as the expedition progressed. The purpose of the missions was twofold: The missionaries intended to convert Native Americans in the area to Catholicism and spread Spanish culture, while the missions’ frontier locations on the far eastern edge of New Spain would also serve as buffers against any territorial threats from the French in Louisiana.

Although he was too ill to aid in the establishment of the first four missions founded by the expeditionary force, Father Margil oversaw the construction of Mission Dolores in January 1717. Margil remained in East Texas until 1719, when all six East Texas missions were abandoned as the “Chicken War” broke out and their inhabitants retreated to San Antonio. As conflicts on the Eastern front of Spanish Texas calmed down, Mission Dolores was reestablished at a nearby location in 1721.

To commemorate the 300th anniversary of the establishment of the original mission, we recently held a Lunch and Learn program at Mission Dolores State Historic Site. Over 20 community members came to our museum to enjoy their brown bag lunches and learn about Father Margil’s life.

Joining the Franciscan Order at the age of 15, Father Margil devoted the next 50 years of his life to the principles of preaching, penance, and poverty that are central to the friary. Isolated at a frontier outpost with little governmental support or supplies, Father Margil was able to adhere to these basic principles while ministering to the local Indians. Though his tenure in East Texas was brief, Father Margil paved the way for later friars to spread Catholicism and Spanish culture in the region.

What would our state be like today if the missions of East Texas had never existed and the French had settled the area? Father Margil—a man on a mission—had a huge hand in shaping Texas history. For this reason, you might say he’s the “Father of East Texas” in more ways than one.