To honor Women’s History Month in March, we are excited to reveal a recently conserved dress that likely belonged to one of the Rayburn women who lived in the Sam Rayburn House State Historic Site. Although we cannot determine the owner of the dress, we can use the dress itself and our knowledge of who lived in the house to reveal clues as to the dress’s owner.

The gray wool dress with a notched collar closes at the front with a button, a hook-and-eye fastener, a press-stud snap, and a metal zipper. The sleeves of the dress include cuffs, with two gray buttons on each cuff. The skirt portion of the dress has a peach-colored silk lining inside, and the back of the dress is pleated. 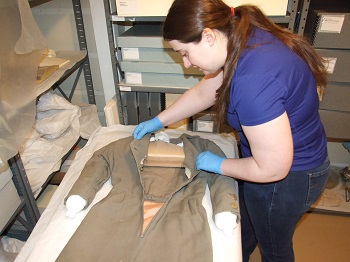 Melanie Sanford of the Textile Preservation Services of Texas conserved the dress using a variety of techniques. A low-suction vacuum, removed lint, various soil particles, and fiber dust from the surface of the dress. The largest losses of fabric in the dress received an underlayer of cotton fabric, custom dyed to match the dress color.

Dyed silk thread stabilized smaller losses to the fabric while cotton fabric was stitched into missing sections along the cuffs and collar of the dress. Light tan silk fabric provided an underlayer to the original peach-colored silk lining. Like the outside of the dress, dyed silk thread stabilized the tears and losses to the lining using stitching techniques unique to textile conservation.

While we could not find a dress pattern that matched this particular dress, the various elements of the dress and Rayburn family photos provide hints as to its age, style, and ownership. The absence of a manufacturer’s tag reinforces the evidence that the dress was homemade, but possibly based on a popular fashion design.

The overall appearance of the dress suggests that it could be a version of the shirtwaist dress, also known as the shirtdress. During 1947, Christian Dior began his “New Look” collection featuring the shirtwaist style for women. Dior based the style on men’s shirts, which included sleeves, collars, and buttons along the front of the garment. These forms of day dresses provided women with comfort while they completed their daily tasks. 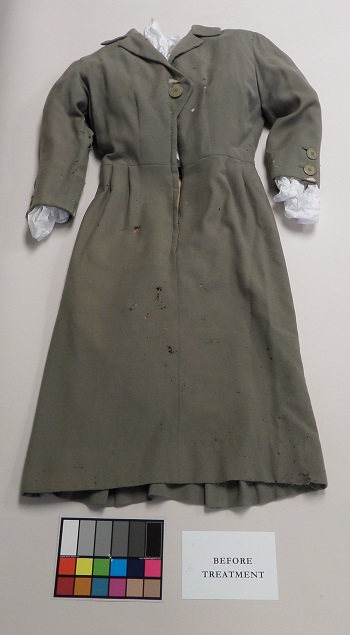 For typical shirtdress designs, buttons could be placed along the front or off-center of the dresses, and button half-way or all the way down the dress. While the top portion of the dress included a type of collar, the bottom portion typically followed the A-line style until pleats, a later addition to the shirtdress style, made the skirt appear slimmer.

Pinked seams became popular during the 1950s, and the dress appears to have pinked seams on the wool and lining areas. The lining itself is interesting in that most dresses made before 1970 lacked lining due to the prevalence of women wearing slips underneath their clothing, while dresses after 1980 included lining.

During the 1950s, plastic Lucite buttons began replacing plastic Bakelite buttons on clothing, and the buttons on the gray dress are likely Lucite. The metal zipper suggests that the dress was created before 1960, though zippers rarely appeared in women’s fashion before the late 1930s. However, dresses made before the 1930s often used hook-and-eye fasteners and press-stud snaps.

Additionally, many of the fastening options on women’s dresses were used on the side seams or backs of the garments, although front zippers began appearing in the 1930s to replace buttons on the front of a dress. As stated earlier, the gray Rayburn House dress has a front metal zipper, plastic button, hook-and-eye fastener, and press-stud snap. Using these different elements as well as Rayburn family photos that show women wearing similar styles of clothing, we believe the dress was made during the 1950s.

As to who owned the dress, we had to ask questions and use some logic to make the best guess. We sent pictures of the dress to members of the Rayburn family who thought that the style and size of the dress seemed reminiscent of Medibel Bartley (1879-1969) rather than Lucinda Rayburn (1876-1956) or Kate Thomas (1873-1971), who were the only women out of the eleven Rayburn siblings.

Medibel “Meddie” Bartley was the last person to live at the Sam Rayburn House. She was born in Roane County, Tennessee, on December 18, 1879. After marrying Samuel Edward Bartley in October 1902, the couple moved into the House around 1943. After her husband’s death in November 1948, Medibel continued to live in the House and entertained guests along with her brother, Sam, and sister, Lucinda.

After Lucinda’s death in 1956, Medibel joined her brother on some of his trips to Washington, D.C., and, after his death, continued to greet guests at the House and care for the home. She passed away on March 4, 1969.

As the last person to live in the House, the dress likely belonged to Medibel Bartley. The plainness of the dress and its initial poor condition in comparison to the formal dresses preserved for Medibel and Lucinda make it unlikely that family members would keep this dress if it had belonged to Lucinda or another deceased relative before Medibel.

Although we know very little about Medibel Bartley, and while we cannot say for certain that she wore the gray dress that recently returned to our collection, we would like to take this opportunity to honor her and the other women who lived and worked at the Sam Rayburn House.

The Sam Rayburn House State Historic Site tells the real story of Sam Rayburn, one of the most powerful and influential politicians of the 20th century, in his authentic 1916 home.  Preserved as a period time capsule, the two-story home contains all original Rayburn furnishings. The Sam Rayburn House State Historic Site in Bonham is one of 22 historic destinations operated by the Texas Historical Commission. For more information, visit www.visitsamrayburnhouse.com.