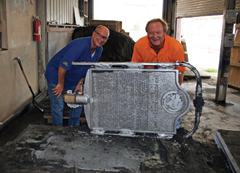 “Y’all are lucky—you’re getting to see the process of a marker being born.”

With these words, Shannon Disney welcomed a crew of Texas Historical Commission (THC) staffers to witness the birth of not just any marker, but the Official Texas Historical Marker for the Southwell Company—the 150-year-old San Antonio foundry that has created more than 16,000 THC markers over the past six decades.

By the time the Southwell marker was ready to enter the world, a small crowd had eagerly gathered around its molding encasement. An acrid metallic smell permeated the air and steam rose from the mold as it slowly opened to reveal the freshly minted aluminum marker. A round of applause erupted from the group upon seeing the text honoring The Southwell Company. And the biggest smiles were on the faces of brothers Billy and Scott Southwell—great-grandsons of company namesake George Southwell.

“We finally got our marker!” beamed Scott, vice president of the company. “It was so surreal to see, and I even learned something from reading it. We’re in the history business, but it took us making our own marker for me to learn some of the details about my own family’s history.”

Scott explains that a marker originates with a historical inspiration that eventually becomes the text, which is then transposed to a large plastic sheet called a negative (formerly created with photography equipment). Computers have replaced many of the manual tasks previously handled by employees, says company president Billy Southwell, who remembers painstakingly setting the text with individual letters.

“Back then, there was a guy from the THC who would come in here, and every once in a while he’d say, ‘Wait—we need to put a comma in this spot.’ Then we’d have to start all over again,” he recalls.

Scott adds, “When I was a kid, it was my job to work with all those letters. I had to clean the paint off of them individually with thinner and place each one back in the appropriate drawer section. I don’t miss doing that at all.”

The brothers explain that the next step involves a trade-secret technique of developing plastic-like impressions for the molds. Employee Cruz Urtado creates them with a mysterious chemical mix and a few large pieces of machinery.

“This whole process is awesome,” he says. “I was in the military, so I’m used to working with my hands to build and fix things. I’ve also learned a lot of history while working here.” 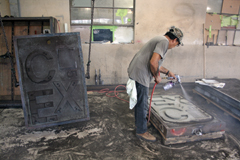 The marker’s final impression is created with a special blend of sand and clay that becomes the basis for the metal mold. Bars and scraps of aluminum are heated to 1400 degrees in a barrel-shaped container until the metal becomes a molten glowing-orange liquid. It is then carefully poured into a small hole in the mold, where the liquid metal spreads throughout channels inside. After about 30 minutes, the mold is opened, resulting in a distinctive sensory blend of clanging metal equipment, pungent smell, and gleaming fresh aluminum product.

Several steps still remain: metal sections are cut, ground, and polished, and small remnants in the letters and graphics are removed with a hammer and specialized chisels. The marker’s final stop is the painting area, where it’s colored entirely black before the top layer of text is shaved off to reveal the shiny aluminum letters beneath.

Scott Southwell explains that the company’s history dates to 1866, when it produced stencils for many of San Antonio’s wool and cotton shipments. In 1914, George Southwell purchased the business, when its primary focus was manufacturing rubber stamps. 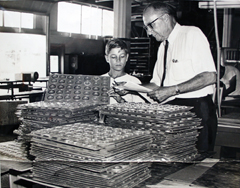 “I remember being a little kid and seeing them sitting around our kitchen table discussing the marker design plan,” Billy says. “I woke up at 3 a.m. and they were still at the table talking about it. They were all brilliant, hard-working men.”

By the time Billy took over operations in the 1980s, he shifted the company’s focus from smaller items like decals and stamps to larger-scale projects like plaques and signage.

“It’s hard to believe there are more than 16,000 of those historical markers across Texas now,” he says. “It seems like we’ve always been working with the THC. It’s not even like they’re customers—they really feel like family.”

This article was originally published in the Winter 2016 issue of The Medallion. The "Web extra" set of photos below features images that were not included in the print version.