Welcome to our first Tax Credit Tuesday post, a new monthly feature on preservation projects that were completed with the financial assistance of the state and federal tax credits administered by the Texas Historical Commission. 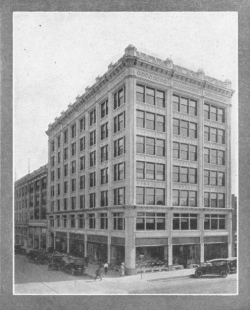 The Martin Building in downtown El Paso was recently fully rehabilitated with the help of these programs. The building was constructed in 1916–17 for M.D. Roberts and William Martin Banner as a speculative office building. Seven stories in height, it was part of the expansion of downtown as the result of major growth in the city in the 1910s and 1920s. El Paso’s downtown retains many well-designed and constructed buildings from this period and is one of the finest collections of mid-scale commercial buildings in Texas.

The building was designed by local architects Braunton and Leibert in the Chicago Commercial Style, with a highly ornamental cornice and large windows making up most of the two street facades. It has a reinforced concrete structural system with a glazed terra cotta exterior cladding. The terra cotta work, which has survived in remarkable condition since its installation 100 years ago, features fluted pilasters, decorative spandrel panels between windows, and red crests on the frieze above the second floor and the cornice at the top of the building. Electric lights were also installed in the cornice to illuminate the building at night.

The first floor featured retail spaces with leasable office spaces on the upper floors. The building is best known locally for being the headquarters of the El Paso Electric Company, which purchased the building in 1950, adding a large, lit marquee sign on the roof, spelling out “USE ELECTRICITY.” The electric company moved out of the building in 1979 and sold it to a private real estate developer, who had the building listed in the National Register of Historic Places and designated as a Recorded Texas Historic Landmark and City of El Paso Historic Landmark. It was renovated in the early 1980s, although many businesses moved out of downtown and the area declined. 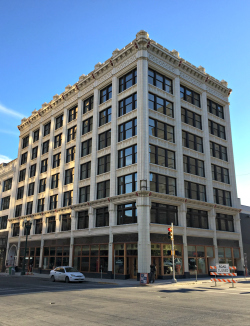 The Martin Building was purchased in 2011 by local businessman Lane Gaddy, a move born out of “a desire to do something to improve downtown, driven by the beauty of the historic buildings.” At the time, the building was only 5 percent occupied. As part of the development of several other properties in downtown El Paso, Gaddy has now converted the five upper floors into 42 loft apartments. The first floor maintains leasable retail spaces, while the second serves as leasable office space. The apartments are the first modern apartments in downtown El Paso, as Gaddy set out to bring a new type of product to the local market, targeted at young renters who want a more urban lifestyle.

Participation in the tax credit programs requires that property owners complete a “certified rehabilitation,” which is a rehabilitation that has been reviewed and approved by staff at the THC and the National Park Service as meeting the Secretary of the Interior’s Standards for Rehabilitation. These require that historic fabric be retained and new interventions are in keeping with the historic character of the building. Gaddy’s project involved the construction and finish out of apartments, construction of new storefront windows, and integration of modern mechanical systems. A major component of the project was the restoration of historic windows, which involved removing each window sash for repair, consolidation of deteriorated wood with epoxy, and application of new glazing putty. While a large expense, the windows are a primary character-defining feature of this building and are important to its design. Where deteriorated windows could not be repaired, custom windows were built for replacement.

Although not yet completed, one final work item will be the addition of a new rooftop marquee to reference the historic electric company sign. Gaddy’s larger development, which includes construction of new buildings on an empty lot and renovation of a non-historic building, is known as ElectriCity, an homage to the history of the Martin Building. The project has been well-received locally, with positive press and active interest in apartment rentals.

While the project had some challenges, Gaddy says the tax credits were a vital part of the financial packaging of his project: “We would not have been able to bring the quality we envisioned for this project without the state and federal tax credits.” Total cost for the project was $7,400,000, with qualified rehabilitation expenses of $7,000,000.

Gaddy says working with the THC through the tax credit review and approval process was a good experience. One of his other projects, now starting construction, is the rehabilitation of the Art Deco O.T. Bassett Tower, with the state and federal tax credit programs as part of his project financing. The Bassett Tower, designed by Trost & Trost, is a landmark building in downtown El Paso and is being repurposed for use as a hotel.

Thanks to advocacy work by the El Paso County Historical Commission, the El Paso County commissioners recently approved funding to complete a survey and National Register district nomination for downtown and adjacent areas. This survey work will include Chihuauita and Segundo Barrio, two of El Paso’s oldest neighborhoods, both located along the international border to the immediate south and southeast of downtown. Currently there is no National Register district in downtown El Paso, although many of its notable buildings are individually listed. A designated historic district will enable all contributing buildings within the district to make use of the tax credit programs for rehabilitation work.